Zeal, Perseverance, and the Time Revolution of 1859 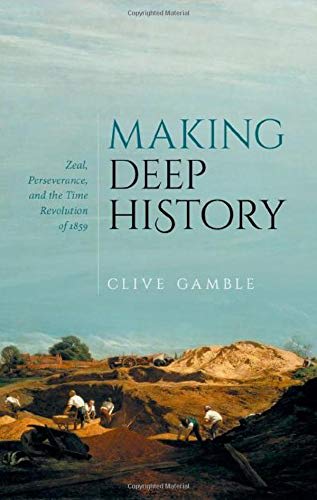 A valuable book that will reignite the spark of excitement created by ancient flint tools – and make you appreciate just how much our perception of the past has changed in the last 200 years.

The density of biographical material can make it feel like an unnecessary slog at times, but perseverance will be rewarded with a deeper understanding of a different age.

How do you envisage a million years? Clive Gamble in “Making Deep History: Zeal, Perseverance and the Time Revolution of 1859” tell us that Charles Darwin was advised in 1868 to try this exercise: take a strip of paper 83 feet 9 inches (25.4 metres) long and stretch it around the walls of a large room. Then draw a thick thin pencil line across the strip that is 0.1 inches (2.5 mm) wide. This pencil line represents 100 years.

By contemplating the width of the (conceivable) 100 years pencil line we can begin to grasp the enormity of the (almost inconceivable) million years stretching round the room.

What came before Adam?

Gamble’s book sets out how the human past was given access to these immense time-scales. Because, in Europe before the 1850s, humans were thought to have arrived in 4142 BC or 6,000 years ago. If we take our “million year” 25 metre strip of paper going round the room, this is the span of time represented by a hand-width of 15cm.

Why 6,000 years ago? It was simply a matter of adding up the ages of all the generations that had ever lived. This was easier than you might think because the Bible has a great long list of Adam and Eve’s descendants plus their ages. Because humans stated with Adam, created by God, that’s as far back as we need to count.

It was already understood that the world itself was extremely old – how else to explain the layers and layers of rock and other materials, populated by banded sequences of tiny fossils creatures? – but divinely created humans were a late-comer.

This was not an unreasonable assumption: no human fossils had been found buried deep in the earth and without human fossils there was no evidence of truly ancient humans.

The key to the door

But this worldview was smashed apart on 27 April 1859 with a crunching blow from a fist sized “pre-historic” hand axe. By recognising these worked flints as the work of man (a nod here to Victorian gender biases) two gentlemen scientists found the evidence of humans that had eluded earlier generations. And because these “worked flints” were buried deep within the layers of the earth and mixed in with the bones of woolly mammoths and woolly rhinos and other ice-age creatures it was clear that humans had been around for literally ages: and a long long time before Adam.

The amazing thing was that these hand axes or worked flints were not rare, they were all over the place. If you dug down to the right gravelly levels of the earth you might find on average one per cubic mere. When people knew what to look for, the lack of human evidence turned into thousands and then millions of tools made by previously unimaginable humans ancestors.

A modern day analogy might be looking into space for signals of extraterrestrial life. So far we have found nothing. The ‘time revolution’ for the 19th century is equivalent to us one day tuning our telescopes to the right frequency and all of a sudden discovering that the sky is awash with alien signals, that we previously just didn’t know how to look for.

Gamble’s history then is a history of the year 1859, following the lives of the key gentlemen scientists who unearthed and interpreted these discoveries. It reads a bit like a multiple biography (a triography?) as we are presented with the world as it might have looked to these eminent Victorians: John Evans, Joseph Prestwich and John Lubbock.

The subject of the book is timescales, and Gamble also has a bit of fun with this concept as he narrows the focus of the book to the (slightly arbitrarily chosen) single day in which the age of humanity was suddenly and vastly widened in scope. He then zooms out to consider the year of 1859 and how this new view of the world was spread around the scientific literati, then zooms out again to the following decades when it became more widely accepted.

The great success of this book is that allows us to share in the disorientating excitement or repugnance (opinions differed) of this “revelation”. What if we had spent our whole life happily placed on that divinely inspired thick pencil line and were told simultaneously: that this is actually an insignificantly small sliver of existence, and that your presumed celestial origins are to be replaced by the begetting of a zoo animal.

(Although Gamble does remind us that most British people were more worried about the much more immediate shock of the Indian Rebellion (1857-8) or the trauma and hardship caused by the American Civil War (1861-5).)

After you read the book, the next time you go into a museum and see another dusty old hand axe, you can really appreciate the profound revolution in thought that this represents, and share in some of that excitement again. At least, it worked for me last week in a museum in Budleigh Salterton! (visit if you can although warning for those with small kids: no toilets…)

Trying to keep the flame alive

The biggest drawback is that the book takes so long to achieve this. I get that micro-history can draw you into a new period, but it felt like over-sharing at times: so what if Joseph Prestwich’s eggs benedict arrived cold1? And do we really need a digression into the varied experience of 1850s railway travel because Evans and Prestwich took a train to meet a fellow antiquarian2?

Perhaps this reflects my own impatient attitude to time, but I would have chopped out about a third of the text.

A British and European focus

We also need to appreciate that this a history focussed closely on the European and specifically British experience. Other people in other places no doubt had different ideas about the birth of humanity but this is not covered here, as Gamble is tracing the origin of the “scientific” approach to our past.

The last two chapters were the ones I enjoyed the most as Gamble brings us up to date and reflects on his own experience researching this book – revealing a delightfully unexpected twist at the end, so please do persevere if you do decide to read it!

I will finish with another analogy. Imagine instead of a pencil line, a single hair. This hair 0.1mm thick represents one year. If we lay 100 of these hairs side by side and squash them close together we represent 100 years – 1 cm wide. 100 metres is now 1 million years.

We now believe humans diverged from our chimpanzee common ancestors about 7 million years ago (see this book review), so 700 metres on our scale. If we want to travel back in time to the presumed beginning of the Universe 13.9 billion years ago we need to travel 1,390 km – the huge distance from one tip of the UK – Lands End in the far south-east of England – to the other – John O’Groats in the far north of Scotland. (We can stop-off in the middle of England for the formation of the Earth 4.5 billion years ago)

So we can measure the whole length of our lives in the width of a finger, compared to the hundreds and hundreds of kilometres of time that has gone before us. For us, as for Darwin, time is still an almost unfathomable chasm that our minds struggle to bridge.

This is a valuable book that I am glad that I have read… but with a bit of cutting, rearranging and less editorial deference it could have been a much better reading experience. So if you feel time stretching out luxuriously before you I would recommend you give it a go. If for you the seconds are forever slipping by to be lost forever, you may wish to settle for this review instead.

← Why new history books? What's wrong with the old ones?

What Is History? - review →