Why new history books? What's wrong with the old ones?

George Orwell, agreeing with me that new history books are important, in his recent book 1984

On this site we try to find, read and review new history books (or mostly new ones – see FAQ. But are we right to focus on new books? Is there any reason to prefer a book about the Normans written in the last 5 years to one written 30 years ago – or 130 years ago?

My hypothesis is that in general new history books are “better” than old ones. Many history books seem to have a half-life so that every 20 years (say) they become half as interesting to us as they were 20 years before. 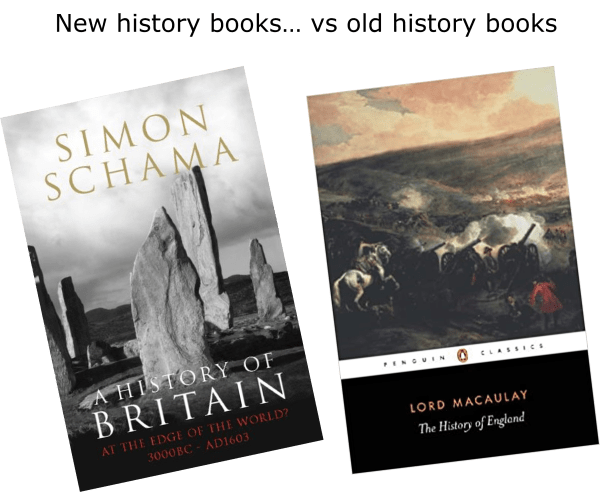 Why might this be the case? Here are three factors:

New is better than old

New history books are about what interests us right now

Firstly and most importantly, history books are written with the present day reader in mind. They are tailored to current tastes and appetites. For example a book written 150 years ago is more likely to be focused on a narrower cross-section of society than one written 15 years ago – perhaps reflecting the broader social backgrounds of the current readership.

Or to take another example: as the pandemic dominated our lives in the last year or so, histories of pandemics – previously boring – now became intriguing and important. The recent Doom: The Politics of Catastrophe by Niall Ferguson is one such tome.

In a few years time when we are back to shaking hands in public and hoovering up the leftover cocktails, no doubt Ferguson’s book, and the many other similar ones, will be consigned to the dust-heap.

We know more now than we once did… don’t we?

The second reason is that our knowledge of the past is greater than it was. Right now, I contend that we tend to accumulate new information on the past without losing information that we previously had. The most spectacular examples are where new scientific techniques have revealed the previously unknown. Archaeologists used to argue about when things happened, but with the use of dating techniques (eg carbon dating) they can now more often than not agree the timelines, and get on with the more important business of arguing why things happened.

A modern historian will have access to all the sources of their predecessors, and their books plus anything that has come to light since. Maybe a box of Winston Churchill’s previously lost war-time limericks turns up in the attic – by trawling through these you have gained an edge on the last generation of Churchill historians.

To be honest this reason is highly dependent on the area of history that is under investigation – some areas may not have much or any new evidence. But historians should anyway attempt to stand on the shoulders of their forebears, even it ends up being more of a piggy back.

The third reason is that, even if you haven’t read it, you may well find an old history book old news. Any revelations or bold new ideas or spilled beans are likely to have percolated into the public consciousness and become mainstream. So while you may not have read the book you have probably spoken to someone who spoke to someone else who read a newspaper article written by someone who had dinner with someone who read the book. Any juicy stuff has already seeped into your brain, making the book you hadn’t read appear banal and obvious when you do at last leaf though it.

There are a few issues with my hypothesis:

There are lots of older history books, surely they can’t all be rubbish?

A few years ago I remember listening to Bob Dylan on his radio show responding to a listener who had asked why he didn’t play more new music: instead he played mainly “old” songs. Dylan’s response was fair:

Another statistical argument to contend with is the range or spread of quality. While on average a book from 2020 may now be considered better than one from 2010 that may not tell you much about how good any individual book is from the earlier or later year.

This is analogous to the “girls are better than boys at maths” statistic. Or is it the other way around? For our purposes it doesn’t really matter. The point is this typically doesn’t tell you anything about how an individual girl or boy is likely to perform. Why? Well the kids get a range of scores from 20% to 100%. The average for boys might be 79%. And the average for girls might be 81%. But knowing these averages is not much help if you have one child and you are trying to guess their score. The kid could be a genius with 100% or a struggler with 20% or anywhere in between, whether or not they are a boy or a girl.

Returning to history books: knowing that books from 2020 are better for us on average than books from 2010 is not enough for us to be able to dismiss the class of 2010. There are likely to be some belters in there – works of careful scholarship that define their period – that we wouldn’t want to miss.

A window into the past

The final reason for not dismissing the oldies – whether or not they are golden – is that they are themselves a snapshot of the period in which they are written. The history books themselves become history. So while we may not now read Macaulay’s The History of England to find out what happened, we can read this 19th century classic to find out how people of this time approached their history, and what this reveals about their views and preoccupations – our history.

Conclusions, retractions and a plea for help

I seem to have argued against myself quite successfully because I am now going to modify the hypothesis: reading new history books, or indeed just following what is being published, is in general more interesting than reading old history books.

But that still leaves a galaxy of older but still great history books.

So how do we know where they are? How do we find these books which have withstood the test of time? Here I am at a loss – are there any reliable websites that can help? If you have any good ideas let me know!