A Story of Us

A New Look at Human Evolution 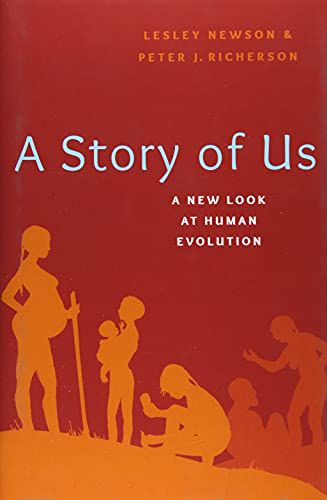 An excellent book that will enrich your understanding of the past and what has made us who we are.

It has helped me to build some mental scaffolding across a 6 million year gap in my historical knowledge, the almost magical transformation from ape to human that has given us language, festivals, machines, art – and tiny balls.

When choosing a (male) partner, to get a handle on the level of support they will provide, I invite you to weigh up the size of his testicles. If he has very large testicles compared to the size of the rest of him (as a Chimpanzee does, and as presumably our common ancestor with the Chimpanzee did) they are likely to be putting all their energy into procreation and very little or none at all into the post-creation phase. If like humans, his testicles are pretty unimpressive, size-wise, this indicates that their ancestors were focussing more on the raising rather than begetting children. Between species (we are told in chapter 5 of this book) testicle size is a very reliable guide.

But attitudes to (males) raising or supporting children can vary from culture to culture. Males can be more or less helpful from place to place and attitudes can change significantly over time too.

This is the key theme of the book: culture can evolve by selection over time, and this can have an impact on our genes, which in turn can impact on culture and so on. We should think of ourselves simultaneously as animals and deliberating beings.

Returning to the testicles (and I’m inferring rather than quoting from the book here) a change in cultural behaviour that involves less promiscuity and more male ape participation in child raising could – in the right circumstances – lead to more successful offspring. These offspring would learn this cultural trait from their parents and continue this success with the next generation. Over time this group would no longer need to invest so much energy in large testicles which could eventually shrink from the size of an orange to the size of a red grape.

A Story of Us by Lesley Newson and Peter Richerson uses this theory of “gene-culture inheritance” to provide a narrative of how we evolved from our common chimpanzee ancestor about 7 million years ago to who we are today, and how we are still changing. It is human history on the broadest possible stage.

Each chapter is a snapshot at a point in time:

What it is all about?

I found the early chapters in particular to be fascinating, explaining how the ape to human-ape transition might have occurred, highlighting changes in the material evidence – bones and stones – and what we know of chimpanzees, and using this to infer likely patterns in collective behaviour over time. For example: the authors propose that as we changed over millions of years our energy hungry brains could only have been supported through working together in groups – to find widely dispersed but tasty food on the grasslands for example.

Working together in groups provided more opportunities for behaviours to be copied from one person to another, providing an environment for more cultural evolution. Changes to the cultural “landscape” would have favoured some genes above others. This would have adapted the hominid to thrive in that cultural environment and simultaneously extend or change the boundaries of possible behaviours that they – through cultural shifts – could potentially adopt.

The ideas in each chapter are introduced in little stories in which the authors imagine what it is like to be an early human. I really enjoyed these exercises in imagination. They helped bring the book to life, in a similar way to Steven Mithen’s After the Ice, another excellent book dealing with pre-pre history.

The book is also pretty short which I see as a good thing! Ignoring notes it is only 235 pages long. Ignoring the last chapter on “today” – which let’s face it is not really history – it is only 185 pages long. The authors have done a great job of packing in 7 million years worth of history, plus evidence, plus some historical fiction into a very digestible package.

The final chapters in the book were interesting but felt narrower somehow in outlook. I’m not sure if this is just because the closer we get to the present the more mental baggage I have about those periods – i.e. I have certain preconceptions of what they should be writing about – but I felt that the last two chapters lacked the penetration of the first four or five.

Of course in any book covering this much ground this quickly there are bound to be some things that you disagree with. For me what stuck out was the brief suggestion that early humans might have lived in mixed brain sized groups – with the big-brains telling the hardy-half-wits what to do. Sounds pretty unlikely to me: a sort of hominid version of a Brave New World arising spontaneously on the grasslands of Africa.

But overall the arguments were put forward thoughtfully and with supporting notes. Where I did disagree it made me think more deeply about the topic and why I disagreed.

These little gripes are minor issues in what is an excellent book that will enrich your understanding of the past and what has made us who we are. It has helped me to build some mental scaffolding across a 6 million year gap in my historical knowledge, the almost magical transformation from ape to human that has given us language, festivals, machines, art – and tiny balls.

What is Popular History? →