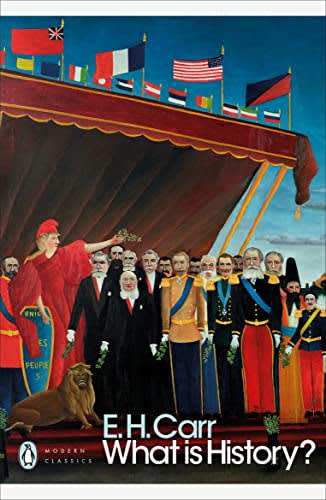 Everyone should read this book.

A classic of historiography that has yet to be equalled. Written in a light and enjoyable prose, it helps us to consciously think about what “doing history” really means – and why this is relevant not just for the past but also our future.

There is something about the theory of history or historiography – ie how and why the study of history is conducted – that can inflame passions among professional historians. Seemingly mild mannered individuals can become enraged, and previously impersonal prose becomes peppered with personal insults.

“There is a common saying that when you are in a hole you should at some juncture cease excavating further. Marwick’s failure to adopt this policy is embarrassingly revealed in some of his throw away sentiments. I am astounded that he should say, for example, that John Warren is a defender of postmodernism, or that postmodernists don’t write books, or that historians are not idealist or materialist, just historians… There are many other regrettable /ludicrous/bizarre/funny/plainly wrong statements of this kind. I would like to say the book is worth the sale price just to find them as, dependent on your point of view, you may find them diverting, but as I got the book free to review I can’t really comment…”

“At least, unlike Munslow, I have written a fair amount of archive-based history on topics of, I would say, some significance. And, despite Munslow’s snide remarks… I am perhaps less conceited than Munslow would seem to be suggesting… According to Munslow my book is a sour diatribe against my fellow historians. On the contrary, it is a joyous celebration of the immense achievements of professional history… We need an understanding of the distant past as well as the recent. Do we need Munslow? One has to admire Munslow’s resilience. But does he really have to go on boring the pants off us?”

The drawing of the battle lines suggests there is no clear consensus on why people “do history” or even what it is they are doing.

Just get on with it?

But this lack of agreement on the foundations of history doesn’t deter professional historians, or people like me (us?) who read popular history books, who seem to just get on with it and not worry too much about the why.

This assumption here is backed up anecdotally by the fact that it was only in year three of a three year history degree that my fellow students and I had the option of a module in historiography. Up until that point I hadn’t really thought about what it was that we were doing other than that it was interesting. In retrospect we should have done that module in the first term of the first year.

By analogy: we were all gleefully mixing flour, water, milk, butter, eggs (sometimes with beer and wine too) and enjoying ourselves immensely but without having given any thought to what might result: was it going to be a loaf of bread or a biscuit? Who was going to eat it? Should it be nutritious? We had no clue. And (perhaps because we were bad students) it didn’t even occur to us to ask these questions.

So we all appear to be doing or reading history happily without stopping to wonder why: but when we do stop to discuss we find we have strongly contradictory views.

Here are some basic questions that every reader of history books should ponder:

Enter “What is History” by E.H. Carr, probably the most influential and certainly the most popular history book on historiography written in English. First published in 1961 and still in print, there is still no more thought provoking and fun-to-read book on the topic. If you disagree with this statement let me know because I would love to hear about any other classics of historiography that I have missed!

If you like reading about history and have not yet read “What is History” you should head over to your favourite bookstore (or click the links in this review) buy it immediately and put it to the top of your book pile.

Structure of the book

It is made up of 6 chapters each covering a lecture on a historiographical topic:

So what does Carr think it is?

Carr tries to steer for a middle course between relativism (ie all history is relative and any interpretation of what happened is equally valid and the objective view (ie it is the job of the historian “simply to show it really was”). The analogy he uses (borrows?) is that while there is an infinite number of views of the mountain there is only one mountain. Generally speaking I think he succeeds in plotting this course, but others have disagreed with him passionately (see above) – accusing him of either leaning too far one way or the other. Whether or not you agree I think everyone needs to engage with his arguments.

My personal hesitation with Carr’s arguments is his search for the single “ideal” historian – i.e. the implication that there is one best way of doing history which everyone should strive for. If you are not doing it his way then you are doing it wrong. My view is that there is room for more than one way to do or read history – although not an infinite number of ways! – even if each of us might have a favourite approach.

Perhaps the main thing I appreciate in this book it’s uplifting tone: problems can be solved and the world can be made better. For example Carr has a view of progress in history which is inspiring to read – whether or not you find his views convincing. It is also a reminder that the controversies of history – are we or not working towards progress in human affairs? – are the controversies of everyday life. Clarifying your thinking on how you view the past inevitably clarifies your thinking on how you view the now and the future.

The writing style is highly engaging. I don’t know how accurately the book repeats the lectures that Carr gave but you can almost hear the conversational and personable tone as you read. It can feel a little dated in places, for example Carr uses the pronoun “he” exclusively as was common when he was writing, and describes “man” before the “advent of reason” as “primitive man”. But the message is inclusive and warm and this comes across in the text.

I will finish with a somewhat controversial quote from the chapter on History as Progress:

“You can, if you please, turn history into theology by making the meaning of the past depend on some extra-historical and super-rational power. You can, if you please, turn it into literature – a collection of stories and legends about the past without meaning or significance. History properly so-called can be written only by those who find and accept a sense of direction in history itself. The belief that we have come from somewhere is closely linked with the belief that we are going somewhere. A society which has lost belief in its capacity to progress in the future will quickly cease to concern itself with its progress in the past”

E.H. Carr, What is History?

I would urge everyone to read this book and consciously think about what it means to read or “do” history which is relevant not just for the past but also the future. If more people engage with historiography earlier we might have more, but less violent, debates than those we saw between Munslow and Marwick. And who knows, rather than a mess of flour eggs and beer we could end up with a beautiful fluffy – pre-sliced – loaf: now that is progress.