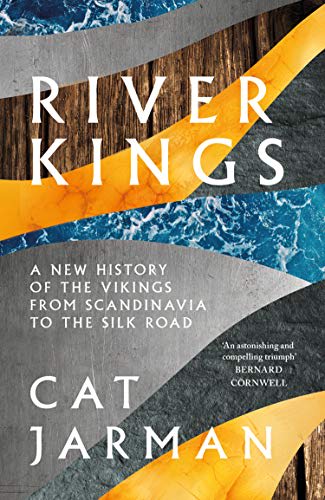 Cat Jarman shows us the Viking world from England in the West to India in the East, following the trail of a small carnelian bead found in a Viking grave in Repton.

This is an excellent history book - describing the evidence that we have for what the Vikings were up to as they roamed the river systems of Eastern Europe, and stringing this together in a compelling and very readable story.

To see a World in a Grain of Sand
And a Heaven in a Wild Flower
Hold Infinity in the palm of your hand
And Eternity in an hour.

While Blake saw a world in a grain of sand, Cat Jarman shows us the Viking world in a little carnelian bead in her book River Kings: the Vikings from Scandinavia to the Silk Road. While we don’t get eternity we do get a few hundred years of rampaging Vikings in a perfectly formed 300 page package. 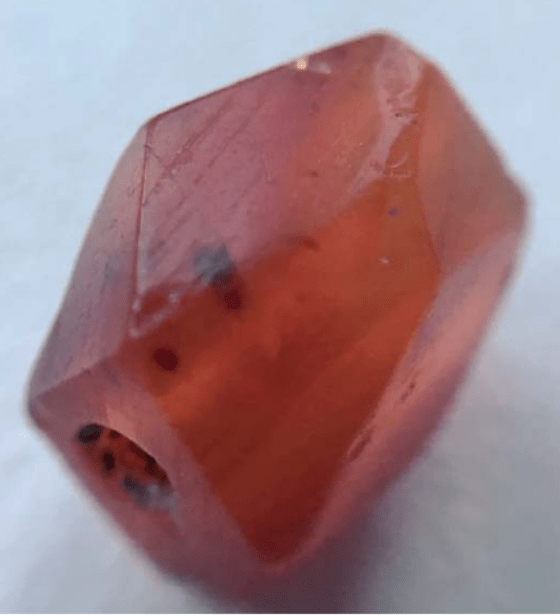 Carnelian bead found in a 9th Century Viking grave in Repton (UK), but originally made in Gujarat India © Cat Jarman

The bead in question was found in a mass Viking grave in Repton in North England and belonged to a member of the Viking Great Army. The Great Army of the 860s and 870s CE marked the first serious attempt to conquer the English Anglo-Saxon kingdoms rather than just grabbing stuff from monasteries, killing a few monks, and sailing home. Things clearly didn’t go well for the Viking who owned the bead (given that he died) but the Great Army itself was hugely successful - subjecting the Northumbrian kingdom to humiliating defeat and marauding about the place at will.

The reason this tiny bead is significant is because it is made out of a material that can be traced back to its origin thousands of miles away in Gujarat in India. The question posed by and then answered in this book is what was a bead made in India doing in a mass Viking grave in the UK?

Jarman takes us step by step along this route, starting in England and then to Scandinavia, then the Baltic and the Gulf of Finland, then to the (now) Russian rivers flowing north past (now) St Petersburg, and the portages to the River Dnieper running south across Ukraine into the Black Sea. From here to Constantinople the route Baghdad and ultimately India and Gujarat.

By going on this journey we see the full extent of the Viking world - threaded along rivers like beads on a string. We can appreciate how it emerged, what it was that bound it together, and how it linked with other peoples and empires.

Jarman's case is that this was a connected world: it wasn’t just Vikings exploding outwards in a one-way frenzied attack, there was constant movement in both directions and by non-Vikings as well as Vikings. For example we have grave evidence from an individual whose DNA suggests that they originally came from the Black Sea area but were buried in Norway1. Or from the Finnish Sami being buried as “typical” Vikings. The Norse of course also traversed back and forth across this world.

She also shifts our centre of gravity Eastward. In the UK we are used to thinking of our Vikings as fixated on the UK and Ireland. Whereas in reality the Viking trading / pillaging routes radiated out both East and West from Scandinavia. The riches to be had out East from exploiting the lands and peoples on the Eurasian steppe must have been equally if not more tempting than what was on offer from the feeble Anglo Saxon kingdoms in the West.

The East was after all the direction of Miklagard, the Great City - Constantinople (now Istanbul) - that so captured the Viking imagination that it formed their mental image for Asgard, the home of the gods. It was also an area of abundant human wealth that the Vikings had no qualms about capturing and selling in the slave markets of Constantinople. This “resource” was exploited to such an extent that the name of the Slavic people became the origin of our word for slave.

One thing that stood out to me in this book was the centrality of slavery to the Vikings. As well as thralls (i.e. slaves) making up a substantial proportion of the population in Scandinavia itself, selling human beings to others was fundamentally important to Viking overseas enterprise. This was the case both in what is now Ukraine as mentioned above, and also in the West where for example Viking Dublin was founded as a slave market.

In exchange the Vikings wanted luxury goods such as carnelian beads, but above all else: silver. Huge quantities of silver have been found in and around areas of Viking activity. Jarman tells us that on the island of Gotland in the Baltic Sea seven hundred hoards of silver have been found, which is particularly amazing given that the island is only about 100 km by 50 km in size.

The total amount of silver dating to the Viking Age found on Gotland now exceeds a thousand kilograms - the weight of a compact car - and includes 168,000 coins.

Jarman suggests that the “exceptional wealth of Gotland seems rather suspicious, even for a society of successful farmers, traders and middlemen”. She implies - although the evidence doesn’t allow her to say with certainty - that the Gotlanders got filthy rich through slaving.

The open veins of Viking Europe

If we allow this assumption to be true, it is incredible to think of the number of human lives devastated and destroyed by the activities of the Vikings - just so they could convert people into lumps of silver which they then buried in a hole in the ground. And the Gotland hoards which have been found - 700 so far - will represent only a small fraction of the silver that the Vikings accumulated.

The Viking world was a world of rivers, forking and snaking over the Eastern Europe landscape - rivers veined with silver and awash with human misery.

What I liked about the book

With that said, one of the things I appreciated about River Kings is that, unlike me, Jarman doesn’t get carried away with flowery prose condemning or cheerleading the Vikings. She describes in precise language the evidence that we have found for what the Vikings were up to and what we might be able to conclude from that evidence.

The evidence takes the form of Viking bones, Viking stuff (often what they had buried with them) and occasionally what was written down. She is particularly good at bringing to life the science behind the DNA testing, carbon dating and isotope analysis that can be performed on ancient skeletons.

So for example explaining why eating a lot of fish might be good for your health while you are alive but can make you appear older than you really are when dead. This is because it throws off the carbon ratios for the carbon dating tests. The Vikings ate a lot of seafood so this has previously caused archaeologists a lot of confusion.

Not making it too personal

Jarman also manages to weave in enough of her own story about finding her carnelian bead, meeting metal detectorists in rural pubs, excavating in Ukraine, and trying her hand at traditional bead making herself in Gujarat... to lighten the scholarship without putting in so much personal stuff that the book loses its focus on the past.

In fact the whole book is written in clear and pleasantly readable prose while not compromising on - as far as I can tell - academic rigour.

For negatives - very little to be honest. The only thing to mention is that if you are after a boy’s own story of Viking adventure this isn’t it. There are no descriptions of Vikings charging into monasteries and slaughtering monks, no rousing battle scenes of shield wall versus shield wall.2 While there are short reimagined vignettes at the beginning of each section the historic scenes are calm and reflective.

Overall then I thought this was an excellent history book, providing a broad overview of the spread of the Vikings, but also focussing on the telling details such as the carnelian bead that brings that world to life.