Fury of The Vikings 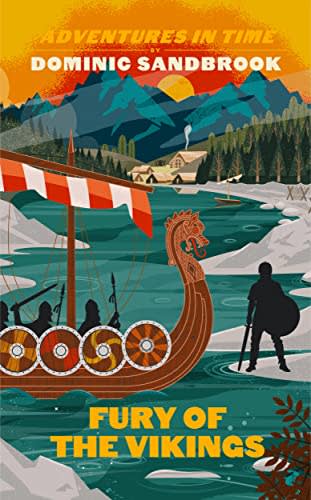 Fury of the Vikings takes us through the three hundred year rampage of the Vikings, from Vinland in the West to the Land of Rus in the East, with a bit of Alfred the Great in the middle.

Told as a narrative history with re-imagined scenes from the past, it was written for kids but works just as well for adults!

The Yggdrasil, as Dominic Sandbrook tells us in Adventures in Time: Fury of the Vikings is the great world tree of Norse mythology. Spanning the universe, its highest branches stretch up into the three worlds of the gods, such as Asgard home of Odin and Thor, where a celestial rainbow bridge leads down to Misgard - Middle Earth, the fourth realm and the world of humans. Its roots reach deep down into the fabric of reality.

At the foot of the Yggdrasil is the Well of Urd. Here the three Norns live, women who collect the water that keeps the tree alive. The Norns are spinners of thread and they know the past, present and future of all living things. Each thread represents a life and when it is your time to go, the Norns cut the thread.

Whether your thread is a long one or a short one is something that is woven into the fabric of the cosmos - but is known only to the three Norns. When you’ve got to go, you’ve got to go.

From raiders to kings

Fury of the Vikings tells a complete story of the Vikings tracing the thread from their mythical and physical origins, then following their campaigns of terror (and trade) around Europe in general and England in particular from 750 BCE ish. It ends with the life Harald Hardrada the “last Viking” whose failure to conquer England for Norway in 1066, signified the point where the Viking thread was cut.

I originally got this book to see how it would land with my seven year old who loves reading, but is more into science - his current favourite is the Horrible Science book Painful Poison by Nick Arnold. Trying to turn his mind away from his (surely innocent?) childish game where he pretends to feed me various poisoned dishes along with his four year old accomplice, I thought Fury of the Vikings could be just the thing.

Did it work? Kind of... he does like the book and read the first 20 odd pages unprompted. But it is probably a little old for him at the moment - a bit too text heavy without the Horrible Science / History comic strip interludes to draw you in. Unfortunately Painful Poison remains number one for the moment.

But although my son needs to be a little bit older, I was pleased to discover that a 41 year old can also consider themself in a suitable demographic. For me the level of detail and pace of the book was excellent, enabling me to get a great overview of the Vikings and some brilliant stories, in an easily absorbable package.

If you are looking for a relatively quick and readable introduction to the Vikings - let’s say you have a holiday in Oslo in a week or two1 - The Fury of the Vikings would sit nicely at the top of the reading list. After finishing this you can then zoom in with “grown-up” history books, but with a better feel for how everything fits together.

Telling it how it really should have happened

Fundamentally it is just a well researched history book. It takes you through what happened politically and militarily - Viking raids and settlement in the West (focussing on England) and the East (the Rus). It tells you about society at the time - for example the fact that there were also Viking women, the rural nature of Scandinavian society and the use of slaves. And it drops in indications every now and again that we shouldn’t treat all the stories we hear as necessarily true.

For example: when recounting the story of how Canute, the Norwegian King of England from 1016 to 1035, demonstrated to his obsequious courtiers that God’s power was infinitely greater than his own, by ineffectually commanding the incoming tide to retreat, and getting his feet wet in the process, Sandbrook writes:

Canute knew perfectly well that he couldn’t control the waves. But he wanted to remind his advisers that God, not man, was the master of all. Whether it really happened, we will never know. But if it didn’t, perhaps it should have done.

Dominic Sandbrook, Fury of the Vikings

The tale of what happened is interspersed with re-imagined scenes from the past - Vikings bursting into monasteries blood dripping from their swords, Alfred the Great cresting the brow of the hill to see his army waiting by Egburt’s Stone and so on. But it is not historical fiction - what matters is what happened.

The content is very slightly sanitised for younger minds. So we get plenty of blood and gore in the re-imagined scenes. But whenever the Vikings are on a murderous rampage, in Sandbrook’s world they always seem to be “roaring with laughter” which takes the sting out a little.

Historical editing is also at work in another scene describing a Viking burial ceremony in what is now Ukraine (then “the land of the Rus”). A Viking chieftan has died and a slave woman is sacrificed at the culmination of the ceremony which lasts several days. Before she is sacrificed (according to the original account by Ahmad ibn Fadlan) she is raped by the dead chieftan’s men. This disturbing episode is instead described by Sandbrook as “she kissed each of his friends in turn”. It seems to be following the Hollywood Parental Guidance scheme - killing and death are fine, naked flesh is not. Thinking of the young audience in general and my son in particular I think Sandbrook has drawn the line in the right place.

Finally I also enjoyed the book’s down to earth approach. A good example of this is when Sandbrook is considering why the Vikings decided to go Medieval on Anglo-Saxon England. Was it the shortage of good farmland in Norway? Perhaps the lack of available lady Vikings? Or perhaps the answer is a bit simpler:

They had seen the wealth of their towns, the softness of their people and the weakness of their defences. They had seen the treasures of their monasteries, the golden relics and silver crosses, the decorated robes and jewel encrusted books. And they had seen the men they would be fighting: peaceful monks and well-meaning priests, who never even carried weapons. So why did they do it? Because they could.

Dominic Sandbrook, Fury of the Vikings

“Because they could” is an explanation that should get more use by historians!

As the thread of this review runs short and the Norns close in with their scissors, I’ll end by saying that more than anything else this book is just fun - with heroes and villains, slaves and kings, and rampaging Viking warriors laughing with a cruel and savage joy as they wade ankle deep in the blood of their victims.

On reflection, perhaps a quiet fascination with poisons isn’t so bad after all...