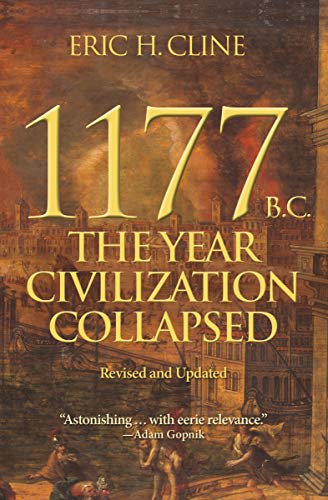 An excellent introduction to the magnificent world of the rulers of the Late Bronze Age Mediterranean, and then their dramatic and simultaneous fall.

Cline brings us up to date with the latest academic thinking on what happened... which is that we still don’t really know, but there are plenty of fascinating clues.

Last summer I gazed upon the face of Agamemnon, or at least Agamemnon's alleged gold mask at the National Archaeological Museum in Athens. Although I gazed only for a brief moment because our then six year old son ran off into the museum and I had to run after him, that brief instant transported me back 3,200 years ago into the Late Bronze Age - a world of kings, warriors, cities and gold.

A few days later we rented a car and gazed upon the alleged palace of Agamemnon at Mycenae, a magical place to visit, which even the six year old’s mini tantrum1 couldn’t distract from. Built on a commanding outcrop and flanked by two steep hills, from the top we could see the undulating farmland and olive groves stretching away for miles, with just a glimpse of the sea on the Eastern horizon. The palace itself was constructed from massive stone blocks and was clearly built to dominate and impress.

Mycenaen Greece, the genesis of the Illiad, Agamemnon, Achilles and the rest of that murderous crew was a flourishing martial empire from about 1750 BCE to 1050 BCE, existing alongside and competing with the other flourishing empires of the Eastern Mediterannean: the Hittites in Turkey and northen Syria; the Egyptians in Egypt, Israel, Jordan and southern Syria; the Assyrians to the East; the Ugarit mini-state on the coast.

The haves and the have nots

As far as Europe and the Middle East was concerned these empires were civilisation. This was where there was writing (and reading), significant cities and populations, and where people made Bronze. Everywhere else was full of rural bumkins with scarcely a duck-shaped ivory cosmetic container between them.

And yet in just a few decades around the year 1177 BCE, these “advanced” civilisations simultaneously collapsed: burnt, abandoned, destroyed.

It took up to 500 hundred years before comparable political complexity was seen again.

Eric H Cline explains what we know of what happened in 1177 B.C.: The Year Civilization Collapsed.

The reason the story is so interesting is that we don’t know exactly what happened, just whatever it was must have been really really bad.

It is still a mystery.

We can see the body in the Conservatory but there is no knife, candlestick or lead piping lying around to help us. Or perhaps a better analogy is that the knife, the candlestick, the lead pipe, spanner and pistol are all lying around but it is currently impossible to say with certainty which were responsible, or in what order they were applied to the victim.

Whatever the instrument(s) it did an extremely thorough job, laying waste to a vast area of land, and stunting civic life for centuries until we see the rise of new states such as in classical Greece (Athenians, Spartans) and their enemies the Persians in the East.

Cline starts off with a grand tour of the Late Bronze Age Mediterranean, introducing us one by one to the big players - such as the Mycenaeans - and talking through some of the archaeological discoveries that help us understand this world.

For example the Uluburun ship-wreck, one of only three known bronze age shipwrecks. The incredible diversity and richness of the cargo revealed the luxury that could be afforded by those at the top:

In addition to its primary cargo of ten tons of Cypriot copper, one ton of tin, and a ton of terebinth resin, there were also two dozen ebony logs from Nubia; almost two hundred ingots of raw glass from Mesopotamia, most colored dark blue, but others of light blue, purple, and even a shade of honey/amber; about 140 Canaanite storage jars in two or three basic sizes, which contained the terebinth resin, remains of grapes, pomegranates, and figs, as well as spices like coriander and sumac; brand-new pottery from Cyprus and Canaan, including oil lamps, bowls, jugs, and jars; scarabs from Egypt and cylinder seals from elsewhere in the Near East; swords and daggers from Italy and Greece... and even a stone scepter-mace from the Balkans. There was also gold jewelry, including pendants, and a gold chalice; duck-shaped ivory cosmetic containers; copper, bronze, and tin bowls and other vessels; twenty-four stone anchors; fourteen pieces of hippopotamus ivory and one elephant tusk; and a six-inch-tall statue of a Canaanite deity made of bronze overlaid with gold in places - which, if it was supposed to serve as the protective deity for the ship, didn’t do its job very well.

Cline also shows us some of the letters sent from one King to another - clearly there was a healthy level of diplomatic interaction, in addition to regular bouts of warfare. I particularly enjoyed reading about the letters sent from various rulers to the Pharaoh of Egypt asking for some gold please because “gold is like dust in your land”.

Having built up a detailed picture of a flourishing, interconnected world with Kings referring to each other as brothers and asking to borrow a fiver, Cline then comes to the collapse, which is even more startling given the apparent power and riches of the states which are swept away.

A litany of causes

Historically scholars have tended to blame the Sea Peoples as the main agents of destruction, a group of people who invaded Egypt and South Canaan and perhaps other areas too.

But, Cline warns us, things are not so simple. After all, even if the Sea Peoples were on the rampage, what set them off in the first place? And after they were done rampaging why didn’t they just set themselves up as the new overlords?

Originally published in 2014 Cline argued at that time that the Collapse was caused by a bit of everything in more or less equal quantities. In this new 2021 edition, Cline has updated his view. With new evidence of ancient climate change now available he is now in favour of a primary cause being a great drying that fundamentally changed the ability of the landscape to support crops - and which lasted for hundreds of years.

He also considers the role of Complexity Theory and “Systems Collapse”. Which is a fancy way of saying that if your advanced kingdom depends upon a complex web of support, something seemingly quite small can disrupt that web and bring the whole thing crashing down.

If a bunch of kingdoms form an interconnecting web and sustain each other - and they were passing around copper and tin and sending begging letters for gold as we saw - then the failure of one might lead to the failure of all of them.

Personally I’m a bit sceptical about applying these pseudo-scientific theories to the past. Clearly human societies are complex. But it is much less clear how brittle or robust they may be. The risk is that we judge by outcomes only - ie if a country collapses it must have been weak. If it doesn’t collapse it must be strong.

This is a bit like going to a doctor with an eye infection and being told you have conjunctivitis. In the historical case calling the bronze age collapse a systems collapse is basically just diagnosing collapsivitus.

Cline points out some of these problems:

...it sounds nice, but does it advance our understanding? Is it more than just a fancy way to state a fairly obvious fact, namely that complicated things can break down in a variety of ways?

The advantage however of thinking in this “systems” way is that it leads you away from a simplistic mono-causal linear approach. In other words: lots of factors were likely in play and many of the symptoms of collapse - such as angry mobs burning down palaces - are also causes of that same process of collapse.

Life is complicated, history is no different.

Part of the fun of reading Cline’s book is that it allows you to take on the role of amateur archaeologist, speculating from your armchair about where it all went wrong. The fact that “it is simply not possible to answer that question, at least not at this time on the basis of the available evidence” just adds to the entertainment.

Add to this the pathos of not just one lost civilisations but many and you have the makings of a great popular history book.

The only thing that stops it from being one of the very best popular history books is that the structure can feel a bit formulaic at times - for example when Cline is introducing the Late Bronze Age civilisations one by one, or when he is methodically working his way through the list of possible causes. It is an amazing story but it could have been told a little better.

An excellent introduction to the magnificent world of the rulers of the Late Bronze Age Mediterranean, and then their dramatic and simultaneous fall.

Cline brings us up to date with the latest academic thinking on what happened... which is that we still don’t really know, but there are plenty of fascinating clues.