How Caesar and Cato's Deadly Rivalry Destroyed the Roman Republic 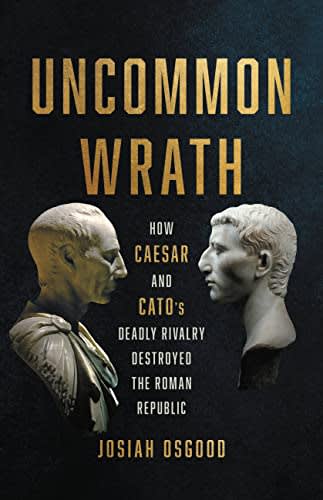 A highly readable account of late republican Rome, told through the lives of Julius Caesar and Cato the Younger. Osgood makes the case that it is these two together who bear most of the responsibility for the collapse of the Republic. Whether or not you agree with this view there is plenty to enjoy in this book.

It is also a timely story - a case study of political meltdown that is relevant today given the heat in politics, particularly in the United States.

Julius Caesar, after a decade of largely unprovoked warfare in what is now France, had killed a million Gauls and enslaved a million more.

His contemporary and political rival Cato the Younger (Marcus Porcius Cato) was orders of magnitude less bloodthirsty. Despite commanding armies in the civil war he was very reluctant to see them fight and die: Plutarch tells us that Cato wept in grief when brave citizens killed each other. In the end he was most famous for killing himself.

Nowadays using a body count as a success measure is considered abhorrent. But somehow it is still the mass murderers who are among the most popular figures in history: Julius Caesar is far better known and admired than Cato - who lurks on the edge of public consciousness.

Julius Caesar was certainly the more familiar figure to me, and I suspect most other readers, if only from Asterix. An ambitious, talented and hard up young Roman aristocrat, Caesar won election to a succession of ever more senior military and political positions with perhaps his most spectacular election success being to the post of Pontifex Maximus age just 371. A modern analogy might be if an up and coming Boris Johnson was elected to be Pope - except with less of an expectation that he would behave himself.

Having exhausted his funds and those of his creditors on extravagent festivals to boost his political career, he then engineered his appointment to the governorship of the provinces Cisalpine Gaul (northern Italy), Illyricum (roughly Croatia) and Transalpine Gaul (southern France). With four legions (i.e. a lot of soldiers) under his command he charged around the rest of Gaul killing, plundering and enslaving for ten years until he was covered in glory and filthy rich.

Cato by contrast (who is not in Asterix) had largely stayed in Rome, trying to stop the Republic collapsing under the weight of the military and economic titans it had created.

Cato’s earliest office was - like Caesar’s later appointment - a religious one. He was elected to the Board of Fifteen for Sacred Actions whose job was to browse the Sibylline Books for clues to the future, whenever there was an emergency. The Sibylline Books were a collection of prophecies bought off an old crone for an enormous price by the last king of Rome hundreds of years before. This was an extremely prestigious position, especially for a young man in his early twenties and provided a great platform for him to launch his own political career, although didn't provide him with the foresight that he might have hoped for.

While Caesar was flamboyant and lavish, Cato consciously set out to be the opposite, embodying the stern values of the Republic: honesty, hard work, emotional restraint, and bare feet.2 This brand of ostentatious moderation in general went down well with his fellow Romans and over time he developed into the Republic’s moral arbiter, with the authority to sway the Senate.

For example when the Senate was reluctantly considering whether or not to execute some Roman aristocrats for conspiracy against the state, on the basis of some shaky evidence and without a trial (the Cataline conspiracy) it was Cato who convinced them to do it, telling them to think of their illustrious ancestors and man up already.

Why did the Roman Republic fall?

Osgood suggests that it was the conflict between these two men that more than anything else led to the collapse of the Roman Republic. After Caesar had completed his Gallic killing spree, he was unwilling to give up his armies without obtaining some sort of protection against his enemies in Rome. Cato meanwhile was unwilling to treat any man as an exception, and certainly not an enemy like Caesar. Both men - leading their respective factions - found themselves locked in conflict. The end result was civil war. It was not something either of them actively wanted.

Caesar eroded the ability of the Senate to adjudicate future disputes. And yet the chain reaction of partisanship was not the creation of one politician alone. Cato's obstruction and boycotts were in their own way revolutionary and damaging, both inciting Caesar's escalation and precluding any alternative solution. In trying to throttle Caesar, Cato had throttled compromise, an essential feature of politics.

This is counter to the more common view that if any two individuals were to blame it was Caesar and Pompey - Pompey being the other superstar general of the period. Osgood proposes that because so many Romans admired Cato and his high moral standards they were reluctant to see him blamed for the civil war catastrophe, and so wrote up their accounts with this in mind. If you admit that your moral exemplar inadvertently caused the deaths of hundreds of thousands of citizens and the collapse of the state you seriously undermine both him and his high principles.

The other argument that historians put forward is that the Roman state was on its last legs anyway and was bound to collapse under its own contradictions. While acknowledging that the Roman Republic had many structural weaknesses Osgood notes that “to blame only such seemingly impersonal forces would be to go too far. A republic is, after all, a man-made object.” In other words the edifice might be tottering but it still needs someone to give it a push.

Which brings us back to the present!

Politicians can and must argue with each other all the time. But regularly staking out extreme positions, while perhaps rewarding for an individual politician’s career, threatens to devastate the political system overall... Leaders recklessly issue ultimatums that limit the options for everyone. They might even resort to physical violence. Polarisation does not have to end in civil war. But a major civil war starts with it.

Osgood is keen that we keep in mind the relevance for our own politics: we must speak not as if we are in the idealised American Republic, but instead remember that we live in the cesspool of Washington3 (or London or wherever else you happen to live).

Overall though Osgood plays it pretty straight: we get the biographies of Caesar and Cato recounted as a single intertwined story, together with some helpful context on Roman life when needed. And it is easy to get swept up in the story without really thinking about what it all means, because at heart it is just a dramatic, bloody and pretty incredible tale.

I think this makes it a more powerful book. By not explicitly spelling out the modern day parallels (except a bit at the beginning and the end) it allows us to ruminate on the similarities and differences at our own pace - or completely discount them if we want to.

It helps too that Osgood doesn’t hero worship either Caesar or Cato. As far as the evidence allows, we are presented with well-rounded characters: the good and the bad, the admirable and the infuriating. This helped me understand why Cato in particular is still such a polarising character today: why some people might find him repugnant while others find him inspirational.

The style of the book is very accessible too. Sentences are fairly short, and prior knowledge is not assumed. Care is taken to tell a good story as well as get the facts as straight as possible. Overall I really enjoyed reading it.

What are the downsides? To be honest I have nothing at all to complain about, unusually for me! The only thing that I think might put some people off is if you have no interest in the period at all - in which case it should be obvious that this is not the book for you. Or if you keep a copy of Plutarch under your bed and already know everything there is to know about Caesar and Cato - in which case you are not likely to find anything new.4

But for those of us not at either of these two extremes this is a highly recommended read.

A highly readable book about ancient republican Rome - a story of political struggles, high principles and brutal reality. It is also a timely story - a kind of case study of political meltdown that is relevant given the heat in politics today, particularly in the US.

For me I enjoyed it most as a chance to get to know Cato the Younger - although not interested in killing millions in battle, he is still well deserving of his celebrity as an archetypal Roman of the Republic.