A prehistory of Britain in seven burials 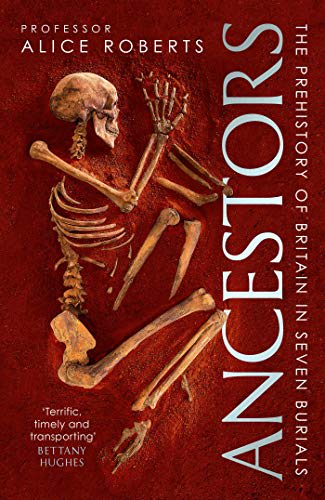 Ancestors surveys the grand sweep of human history in Britain before the Romans came along, by forensically examining bones, burial things and DNA.

But a disjointed and sometimes meandering structure means it is more like a disarticulated skeleton than a coherent body of work. While it has some great content that it is worth digging through, it ends up a decent, rather than great, book.

Elizabeth II, Queen of the United Kingdom and some other places, was buried on 19 September 2022 in Windsor Chapel. The crown she wore as queen, together with the orb and sceptre (ie the golden ball with a cross on top, and the golden stick respectively) had been resting on her coffin but were not interred with her - they will be used again later. The main ceremonial item that was buried alongside her was a simple wooden wand belonging to the Lord Chancellor1, broken in two to symbolise the ending of the Queen’s reign2.

When future archaeologist manage to relocate the ruins of Windsor chapel, buried underneath a decommissioned 6th millennium spaceport, they will find a very modest burial for a lady who was head of state for about 140 million people around the world: the bones, a few personal jewels, the odd button - and no sign at all of the ceremonial wooden wand which will have rotten away to nothing.3

All of which provides an instructive comparison to the Amesbury Archer, also named the King of Stonehenge by the media4, who was buried over 4,000 years ago in 2,300 BCE in the South of England.

Alice Roberts in Ancestors: A prehistory of Britain in seven burials talks us through the hoard of objects found with the skeleton of the Archer:

This may not seem like that much stuff to us, but compared to everyone else buried in the same period it represented huge wealth - ten times as much as is usually found in a burial. And much more than will have been buried with Queen Elizabeth II.

The Amesbury Archer’s grave will also be missing any significant and beautiful items made of wood, textiles and leather that will have decomposed completely, just like the Queen Elizabeth’s Wand of Office - charged with symbolism - will eventually vanish without trace. At a minimum the Archer is likely to have had a bow with him, perhaps also snapped in half and laid on the body.5

What does it all mean?

So he was a member of the copper age super rich in Britain 4,000 years ago. Alice Roberts then does a great job of explaining what all of these objects mean for this period of prehistory - and what his skeleton reveals about the man.

We can see metal beginning to be used by some people in the gold and copper items - although worked flint still seems to be the more practical cutting tool. We can evidence of sophisticated hunting weaponry with new barbed arrowhead designs. And we can see the evidence of long distance travel and migration in the bones of the man himself, in particular his teeth...

Our teeth are incredibly durable - we only get one adult set so they need to be. And they are coated with a layer of super hard enamel when the teeth develop. This enamel letter is not replaced during your lifetime, we need to look after it! This also means that the chemical signatures of the food and water you consume when your teeth are forming is detectable in your teeth for as long as your teeth survive.

Because the chemical signatures in food and water are different in different locations, archaeologists can make informed guesses about whether the skeletons that they find grew up locally or not - by analysing their teeth enamel.

Quite astoundingly the Amesbury Archer seems to have grown up in the Swiss Alps before eventually being buried in Southern England in his early forties.

Travels with my ancestor

If he came directly by the shortest route (which he certainly wouldn’t have done) this was a journey of almost 1,000km which Google Maps tells me will take 171 hours of constant walking. This level of mobility in such a high status individual at this time is amazing.

It also indicates population wide mobility - the genetic evidence from a range of skeletons seems to point to almost complete population replacement by these metal using “Beaker People”, taking over from the stone age Neolithic inhabitants of Britain who came before them. The likely reason for this, Roberts tells us, is that changes in climate disrupted the way of life of the Neolithic farmers, who saw a significant reduction in their population and abandoned the fields to rely on their herds of animals instead.

When the Beaker People made the crossing to Britain over the Channel they came across a landscape largely empty of humans. As Roberts puts it:

...in the later fourth millennium BCE, it seems that cereal cultivation was abandoned and there was a switch to more nomadic pastoralism... And along with that, there was a population collapse. Long barrows fell out of use. Causewayed enclosures fell into ruin. Fields were abandoned... this is the background to the arrival of the Beaker complex in Britain [i.e. the arrival of the Amesbury Archer and his associates] - it follows that Neolithic population collapse.

Other remarkable insights that Roberts gleans from the bones are: a bigger than normal bone nodule on the top of his shoulder implies a well developed bowstring drawing muscle. Subtle clues in the finger bones point to an iron grip. And a missing left kneecap means he probably walked with a limp.

Overall we get an incredibly detailed picture of an individual who lived 4,000 years ago - and can put him firmly in the context of dramatic cultural and population upheaval.

Of course this chap is just one of the seven burials we are promised by the title! The full list is:

What I liked about it

This book is best when it gets into the details of the burials themselves. Roberts gives us accessible explanations of the science behind the archaeological theories and talks through why the bones tell us what they do.

This allows us to build up a picture of who the deceased were, but also to understand how much confidence we can have in these interpretations. She is careful to warn us of the dangers of over interpretation: unlike me Roberts never calls the Amesbury Archer the King of Stonehenge and is refreshingly scathing of those who get carried away with that sort of thing!

She also avoids too much jargon. My “jargon test” for any book on prehistory is how often the author uses the word “liminal”6. I’m happy to report that Roberts restrains herself until chapter 8 and then only uses it once.

Finally the book seems very up to date, reporting on excavations in the last few years and some still underway. For example I really enjoyed reading about two excavations from 2011 and 2017 where Neolithic long barrows, much to everyone’s surprise, were discovered to be the burial places of deliberately burned great halls, which were only later turned into the more familiar stone lined bone chambers hundreds of years later.

Here is where the complaints start I’m afraid!

Alice Roberts is a brilliant and engaging communicator on TV but this doesn’t really translate to the page: while the book has some great content, it isn’t a great book. There is a strange juxtaposition between the scientific and highly logical descriptions of the burials themselves, which are set within an overall narrative that feels meandering and sometimes whimsical.

We need to talk about Alan

In fact the book feels a bit like it was written as a script for a TV program with interviews replayed word for word, and lots of cheesy “I’m on my way to Salisbury museum to meet...” moments. When Roberts started talking about her sandals (walking through a bog) as if they had feelings I felt strong echoes of the part memoir part travelogue Nomad written by that other well known TV (and radio) presenter Alan Partridge. The first person narrative style of Alan’s book, in which he recounts a journey taken in the footsteps of his father - and occasional tangential musings - is surprisingly similar. And Alan also anthropomorphised his footwear, naming his walking shoes Fernando and Denise respectively, after his two estranged children.

To give a more concrete example of the slightly wayward delivery: the last chapter is a reflection on death and the options for burial today: under a tree, dissolved into fertiliser, donated to medical science... but then starts swinging for religion, Dawkins style, calling it a delusional ponzi scheme that is unfit for the modern rational mind. Even for me as an atheist it all seems a bit... unnecessary.

So while there is a lot of great, and very up to date, stuff in this book, I felt too distracted from it too frequently to consistently enjoy the reading experience.

Ancestors is full of fascinating insights into the prehistory of Britain: what burials can tell us about particular moments in our past, and change over time. Roberts gives us a forensic examination of the skeletons, and the objects found alongside them.

So there are the bones of a good book here - and the bones have been gnawed of every scrap of meat. But for me the stylistic distractions meant it read more like a disarticulated skeleton and never really hung together as a single body of work.