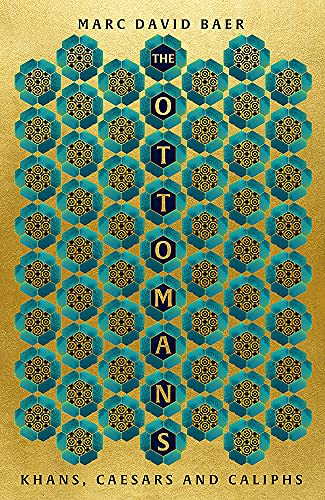 A thought-provoking and accessible guide to the history of the Ottoman Empire from the 14th to the 20th century , which at its peak spanned three continents, stretching from North Africa to the Caucasus and from Meca to Budapest.

This is a story of the interplay of religious conflict and tolerance, an elite slave army against whom other European powers struggled to compete, and an ingenious solution to the age old problem of sibling rivalry.

How did an obscure thirteenth century Anatolian beylik emerge as a vast continent-spanning Ottoman empire? How then did it come to wither away in the nineteenth century, with its eventual replacement by Ataturk's new Turkish Republic1 in 1922? Marc David Baer, Professor of International History at the London School of Economics and Political Science, tells the story in his new history of the Ottoman Empire, also reflecting on how we think about the Ottomans today - and why it matters.

The Ottoman Empire was founded by, and named after, Osman I, a tribal leader of one of many Anatolian beyliks which emerged in the second half of the thirteenth century. His grandson Murad I, who ruled 1362 to 1389, was the first head of the Ottoman dynasty to style himself as sultan, secular civil and military leader, rather than the title of 'bey' (chief) taken by his predecessors Osman and Orhan. The new title represented the transition to a more settled and organised empire, which was expanded by Murad I's conquests of Adrianople (which he renamed Edirne) and much of the Balkans during his reign.

In the author's view, Murad I's legacy lay not only in the territorial expansion of the empire, but in the pursuit of two policies which would contribute to later Ottoman success and stability, namely the Collection (devşirme) and the codification in law of fratricide on dynastic succession.

The Collection was a child levy on Christian subjects of the sultan, in which one in forty eight to eighteen year old Christian boys were taken from each judicial district in South-eastern Europe and Anatolia to the seat of the sultan. There they were circumcised and forcibly converted to Islam. They could then be trained as leading officials or palace servants, but many joined the Janissaries, the elite infantry which formed the first modern standing army in Europe. Raised from a young age to be loyal to their patron, the sultan, the Janissaries bypassed the existing elites of the Ottoman Empire, and were feared and respected across Europe.

Murad I also came up with a clever idea of how to deal with difficult siblings on assuming power – he killed them all off. Murad I obtained religious sanction, and then codified into law, the policy whereby a new sultan would murder all of his brothers and uncles, and often all male relatives, regardless of age, on assuming power. Male relatives were either killed on the battlefield or, if they survived, they were strangled with a silk cord, befitting their royal status. This aspect of Ottoman rule is also vividly brought to life in an excellent review by Anthony Webb of The Lion House, elsewhere on this website.

This is a book with a clear point to make: namely, that the Ottoman Empire was a European empire, and it is impossible to properly understand the story of Europe without integrating into that story the Ottomans and their empire. The Ottomans saw themselves as the successors to the Roman Empire: much of its territory encompassed lands formerly under Roman (and then Byzantine) control. Its European territories, in particular in what is now Turkish East Thrace and the Balkans, were early conquests in the expansion of the Ottoman Empire and were core to the Ottomans' conception of themselves and their empire. With the conquest of Constantinople in 1453, the capital of the empire was the 'Second Rome', with its conqueror, Sultan Mehmed II, styling himself the new Kayser-i Rum.

But the Ottoman sultans were not just Caesars. They also celebrated their pastoral origins as nomadic successors to the Mongolian khans. In addition, with the conquest of Mamluk Egypt in 1517 by Selim I, they were custodians of the holy cities of Mecca and Medina; Suleiman I claimed the title of 'caliph', successor to Muhammad and leader of the Ummah, the global community of Muslims.

The Ottoman Empire had many faces, but has Europe (i.e. the non-Turkish bit of Europe), and perhaps Turkey itself, chosen to forget the European nature of that empire? In the telling of Marc David Baer, it has, and his book is a conscious effort to rebalance the portrayal of the Ottomans.

The author examines key events and themes in supposedly European history from an Ottoman perspective. Did secularism, tolerance and modernity begin in Europe with the Peace of Westphalia in 1648? Or did the Ottomans get there first under Mehmed 'the Conqueror' in the fifteenth century, who rebuilt Constantinople as a 'multireligious metropolis' and who permitted Greek Orthodox Christians, Armenian Christians and Jews to live according to their own systems of beliefs and practices?

Following their forced departure from Spain in 1492 and from Portugal in 1497, as many as one hundred thousand Spanish and Portuguese Jews, as well as a large number of conversos (Iberian Jews compelled to convert to Catholicism) migrated to the Ottoman Empire, where they were relatively free to practise their religion and could rise to important positions at the Ottoman court.

The Renaissance, the Reformation, and the Age of Discovery

Likewise, Marc David Baer presents the Renaissance, the Reformation, and the Age of Discovery from an Ottoman perspective. Sultan Mehmed II, who had his portrait painted by the Venetian Renaissance master Gentile Bellini in 1480, is presented as a renaissance prince and patron of Italian and Greek scholars. Suleiman I 'the Magnificent' allied with Protestant rebels against their mutual enemy, the Catholic Habsburgs. As the Portuguese and Spanish were colonising the Americas, the Ottoman's were projecting their power and controlling oceangoing trade from the Mediterranean to the Indian Ocean.

If the above all sounds relatively flattering to the Ottomans, the author also does not shy away from comparisons with European history that are less complimentary. As the author himself states in the introduction, his 'seeks to neither glorify the house of Osman nor to condemn it, but to present all that makes it both different and surprisingly familiar for the general reader'.

With much of the book recounting the power and achievements of the Ottoman Empire at its peak, the author also addresses its decline in the nineteenth century (during which it was characterised as the 'sick man of Europe') and its increasing violence towards its own minorities in the late nineteenth and early twentieth century.

The author characterises the genocide of Armenian Christians during World War I as the first genocide committed by a European empire in Europe. The chapter on this, and related atrocities committed during the First World War, is very powerful, in particular his recounting of the testimony of a rare Armenian female survivor of a death march to the Syrian desert. The author estimates that 'out of a population of one and a half million Armenians in the Ottoman Empire in 1914, 650,000 to 800,000 has been annihilated by 1916'.

Of those that escaped, the author states that a 'couple of hundred thousand fled abroad to Russia and elsewhere. An estimated one hundred thousand Armenians, in situations of duress, converted to Islam to save their lives. Tens of thousands of Armenian girls and women were raped and subjected to sexual violence, taken into Muslim families as daughters or brides, and converted to Islam and taught Kurdish or Turkish, thereby escaping deportation.' In the same period, Assyrian Christians were also targeted, with claims that quarter of a million of them, half their original population, were killed by the Ottomans.

Shortlisted for the 2022 Wolfson History Prize, this is a deserving candidate. It represents an excellent example of history writing for the general reader. The author is an Ottoman history specialist, having written many books in the field. He manages to convey his expertise to a general reader in an accessible fashion; the book is easy to read. It also benefits from a unifying theme, that of presenting the Ottoman Empire in its European context.

There was nothing that I strongly disliked about the book. I thought that the start of the book could have benefited from more contextual information about the thirteenth century Anatolia from which the Ottomans emerged. It was a confusing place, with multiple competing and, at times, overlapping layers of authority, Byzantine, Seljuq and Mongol, with the Anatolian beyliks and various Byzantine princes stuck in between.

When combined with the lack of documented evidence about the early Ottoman rules (and the great amount of myth later invented by the Ottomans) making sense of what was going on and why, what is myth and what isn't, isn't always that easy and I thought the author could have done a slightly better job guiding the reader through that confusion.

The greatest strength of this book is that it does more than just recount the history of the Ottoman Empire. It connects that history to questions of how the Ottomans viewed themselves, how others viewed them, and how those perceptions changed over time. This goes to the core of what the book is about.

After the fall of the Ottoman Empire during the First World War, Mustafa Kemal 'Ataturk' ('Father of the Turks') made a conscious effort to rebrand his new republic in contrast to is past; as he said himself 'The new Turkey has absolutely no relation with the old Turkey. The Ottoman state has gone down in history. Now, a new Turkey is born.'

For the author, his book is partly about 'the question is what to do with the memories' of Turkey's Ottoman past. That makes this book thought provoking and important not only for those interested in the history of the Ottomans, but also those interested in modern day Turkey, South-East Europe and the other lands once controlled by the heirs of Osman I.

Words The Vikings Gave Us - review →