The Storytellers Who Shaped the Past 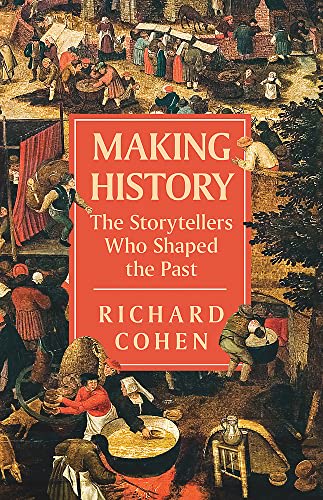 A useful book, with lots of interesting biographical information on a whole range of historians from the Western tradition, starting with the Greeks and ending at the present day

But despite it‘s wide range, it is also quite narrow in scope - with nothing on why it was this particular bunch of historians that came to tell our story. Cohen simply tells us what happened - not why.

The study of history is a funny beast: on the one hand everything is history, given that by the time we put fingers to keyboard, we are commenting on the past. On the other hand “history” can mean an exclusive professional endeavour focussed on narrow areas of enquiry.

So history is everything or - if we are not careful - history is nothing.

Richard Cohen in Making History: The Storytellers Who Shaped Our Past steers us through changing views of history and of historians, from the earliest historical records up to the present day.

On the one hand he succeeds: we have a comprehensive narrative of the development of anglo-american history told through the lives of a host of historians.

On the other hand it fails: the huge mass of information and people covered has no coherent or consistent message to bring it together.

It is a bit like getting carried away at a hotel breakfast buffet: after stacking your plate with one of everything and working your way through the pile, you are left feeling relieved you managed to finish it all up, bloated with too much food, and thinking that there should really be more to breakfast than this, however good value.

What’s in the book

In essence Making History is a collection of mini biographies of historians through time, starting at the beginning with Herodotus1 in ancient Greece and ending with characters such as Niall Fergusson and Henry Louis Gates Jr, still going strong today.

Each chapter covers either a key historian, or a bunch of them that have a common characteristic eg being Roman. I think you can get a pretty strong sense of whether you will enjoy this book from reading the chapter titles so here they are! (I have updated the chapter headings to be a bit more descriptive than they are in the book.)

If you didn’t have the patience to read the whole list that should be a warning sign!

To get the most out of this book I would recommend that you have a look through the chapters listed above and see if you can find seven or eight that interest you in their own right. At 30-40 pages per chapter you will still have a decent length tome and you won’t be missing anything given each chapter is self-contained and the whole adds up to precisely the sum of its parts.

One of the chapters I enjoyed was on the beginnings of professional historians, in particular the mini-biography of Leopold von Ranke (1795 - 1886) who I had come across previously as a caricature rather than a man. His most famous quote was that he wanted to “tell how it really was” (for the German speakers: “wie es eigentlich gewesen”). This phrase has come to represent a way of doing history which is lambasted as arrogant, naive and outdated - if there are an infinite number of perspectives how can you uncover The Truth?

But, as Richard Cohen explains, his comment was actually made in the context of his other historians colleagues getting too big for their boots:

You have reckoned that history ought to judge the past and to instruct the contemporary world as to the future. The present attempt does not yield to that high office. It will merely tell how it really was.

Instead of hubris, von Ranke was advocating humility.

Cohen then goes on to tell us in more detail the outline of von Ranke’s career, and his belief that the hand of God was behind everything. The historian’s role was to try to understand God’s intentions: the “overruling compulsion of the innate life-germ” (Einfühlungsvermögen). There was much more to von Ranke than simply telling it how it was.

Meanwhile holding a chair in history went from being seen as a sinecure (”Unsuccessful in my profession, infirm and lame, I am impelled to solicit for some addition to my present income” went one rather unimpressive application to the post of Chair of History in Cambridge University in 1762) to a serious and increasingly widespread academic position in the later 19th Century. Von Ranke we are told, did as much as anyone else to professionalise the methods and outlook of these new historians.

History in the United States

I also got a lot out of the chapter on the historians of the American Civil War - as I didn’t know much about the historiography and it has been such a live and contentious topic up to and including nowadays - and the chapter on Black (north American) historians - which gives a convincing overview of a number of important figures, again bringing us right up to the present and the 1619 Project.

Cohen has very deliberately avoided the word historiography in this book. And you can see why - it’s a long word and might put people off. By concentrating on telling the stories of the storytellers he avoids getting bogged down in boring passages about what it all means and instead can liven things up with another anecdote of David Starkey removing his trousers on Hampstead Heath.

But lacking any clear attempt from Cohen to figure anything out from the collection of individual stories, the whole thing can feel a bit directionless: a bit like reading the supporting notes2 for a book rather than the book itself.

Not telling it why it really was

For example he doesn’t try to address why the historians covered came to have such an influence; why it was this particular set that have become the “storytellers who have shaped our past”. Instead we are simply told that historian X was born in the year dot, wrote book Y - and everyone read it.

Perhaps, like von Ranke, Cohen is wary of hubris. But his caution makes this a lesser book, even if Nemesis is safely avoided.

It is also worth mentioning again that the Storytellers of this book are those of the Western English speaking tradition. If you want to find out about how history has told different stories of the past in different traditions - ie Indian, or Chinese - you will have to find a different book.

These are criticisms based on what the book is not which is a little unfair. But given the title may create these (reasonable) expectations I think it is important to point it out.

This is a valuable book, with lots of interesting biographical information on a whole range of historians in the Western tradition.

It is also something of a contradiction - it is vast in range, covering a huge cast of famous historians. But it is also quite narrow in scope - with nothing on why it was this particular bunch that came to tell the story of the past, simply the salient biographical facts recounted.