Words The Vikings Gave Us 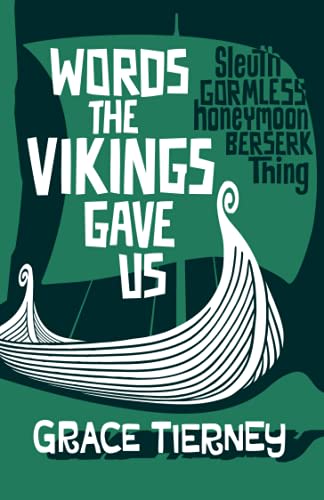 Dip (Old Norse deypa) into this interesting book by Grace Tierney (of wordfoolery blog fame). It is an enjoyable, light-hearted look at Viking influence on the English language.

It’s the kind of book that would make an excellent stocking filler and I would recommend it as a good jumping-off point for discovering more about both the Vikings and about English.

Words the Vikings gave us by Grace Tierney is rather different to the majority of the books reviewed on this blog as it is effectively a glossary of Viking words still in use today, or which have contributed to words in use today, along with examples of both historical and modern usage. The focus is very much on the words themselves, although the words and their context do give us a certain amount of insight into Viking history and culture.

What's it all about?

The book is divided into sections including more obvious ones like “Myths and Sagas”, “Viking Place Names” and “Raiders from the Sea” and less expected ones such as “Norse Romance” and “Invading the Menu”. Each chapter contains a few pages of words that have come directly from the Vikings or that have come into modern English via other languages but have a Viking root. In some cases both the Anglo-Saxon and Viking words have come from Proto-Germanic roots and were similar, with the Viking overtaking the Anglo-Saxon over time.

As a speaker of German I find it very interesting to note similarities with German where the root is Germanic: for example the entry for “ferry” notes that it comes from Old English ferian - to carry or transport people or goods, especially over water, which came from Old Norse ferja and Proto-Germanic farjan. Most people who have studied even a little German will remember the verb fahren and the noun Fähre.

Also interesting are the words which sound similar but have different roots, such as “mug” and “muggy” - mug coming from mugg or mugge but “muggy” coming from the Old Norse word muggy meaning drizzling mist via the Middle English verb mugen meaning “to drizzle with fog or mist”, a word which is overdue a comeback in my view. Just as it’s not entirely surprising to find that in the past we in the UK have had a word for drizzle with fog or mist, the words in the book can tell us something about the Vikings and their culture.

The “Power and Politics” chapter gives us an interesting insight into Viking society. Tierney points out that the Vikings have an image of being lawless heathens in the British Isles because the writers of the Old English accounts were monks whose abbeys the Vikings had raided, but stresses that to be the successful conquerors that they were, their society would have needed law and structure. In fact, some of our very common law and structure words are Viking in origin: byelaw, for example, comes from bi-lagu via bilage; then, as now, it was a town law applying to specific people in a specific place. (Sadly Tierney does not give us the Viking phrases for “no ball games” or “keep off the grass”.)

...some of our very common law words are Viking in origin: byelaw, for example, comes from bi-lagu via bilage

From this we can also see that the word “law” itself comes from the Viking lagu. “Thing” meant meeting, assembly or discussion and came from Viking to Old English as Þing. It changed its meaning as the language changed from Old to Middle English and first became something that was discussed at a meeting, then someone who was to be pitied or a personal possession. By the 1600s its meaning was similar to how we understand it now. However, we have retained it in English as part of “hustings”, a compound of the words for “house” and “assembly”. “Odd” also has links to Viking politics: derived from Old Norse oddi, it could be used to describe the person with the casting vote (oddr-madr).

Despite Asterix and the Normans being one of my favourite Asterix books, I hadn’t appreciated that the Normans were Vikings, although the clue is clearly in the name. The Old English word for a Norwegian was Nordman, while in Old French it was Normand which came from a Scandinavian word. Tierney gives us a very brief sketch of Rollo, the leader of the Vikings who founded the duchy of Normandy.

Tierney is keen to tell us that Viking women had more rights than their contemporaries in other societies: they could own property, ask for a divorce, and reclaim their dowry. While Viking men were away conquering the women ran farms and businesses and some Viking women fought as shield maidens. However, she does admit that the history around shield maidens is not entirely clear, and comments such as “A thing meeting could be attended by all free Viking men, there were no restrictions on status or property” do give as an insight into how far women’s rights actually went.

An interesting entry in terms of attitudes to women is “meek”. It entered English in the late 1100s and came from the Old Norse *mjukr”, meaning soft, pliant and gentle, and gentle-tempered and humble when referring to a woman. After a century or so its meaning changed to be submissive, obedient and docile, which Tierney attributes to the more patriarchal Anglo-Saxon society.

Readers won’t be surprised about the Viking influence on place names, with an obvious example being dale, the level or gently sloping ground between hills, as we see in the Yorkshire Dales. Tierney, who lives on the east coast of Ireland, points out the large number of Viking place names in her area: Carlingford, Skerries, Howth, Dalkey, Leixlip, Wicklow, Arklow, Wexford and Waterford. She points out that the extent of Viking place names shows the extent of their explorations, from Shetland to Reykjavik to Copenhagen to Russia.

In many cases Old English and Old Norse can be traced back to the same Proto-Germanic root. “Tidings” is an example of this, linked to the Old English verb tidan (to happen) and the Old Norse noun tidendi meaning events or news. Both come from a Proto-Germanic word relating to divisions of time. In fact, “time” also comes from words in Old English, Old Norse and Swedish.

How to read this book

Those looking for a weighty historical tome won't find it in this book, and, in fact, reading it from cover to cover like I have for this review is probably not what’s intended.

I found that when I left it around the house my eleven-year-old son would tend to pick it up, open it at a random page, say, “Did you know…?” and then give me a definition; this is a better way to read it than straight through.

I found that when I left it around the house my eleven-year-old son would tend to pick it up, open it at a random page, say, “Did you know…?” and then give me a definition

Its fairly general bibilography makes it difficult to follow up on anything you’ve found interesting and want more information on; I wasted a lot of time trying to find the Welsh word for happiness that derives from wisdom rather than luck, for example. If anyone can enlighten me on that, please do contact me!

There are also a few typos and spelling and grammar issues; the problem with people who are interested in words and language is that a lot of us are also pedants and will notice this kind of thing! However, there weren’t enough to spoil my enjoyment.

“Words the Vikings gave us” is an enjoyable, light-hearted look at the Viking influence on English, interesting from an etymology point of view while also providing a few historical insights. It’s the kind of book that would make an excellent stocking filler (“stocking” from Old English stocu (sleeve) and Old Norse stuka, from the same Proto-Germanic source; “filler” from Old English fyllan and Old Norse fylla, both from Proto-Germanic fulljanan). I’d recommend it as a good jumping-off point for discovering more about both the Vikings and about English as a language.

(Additional definitions in this review taken from etymonline.com)