An Epic History of the Wars for the Holy Lands 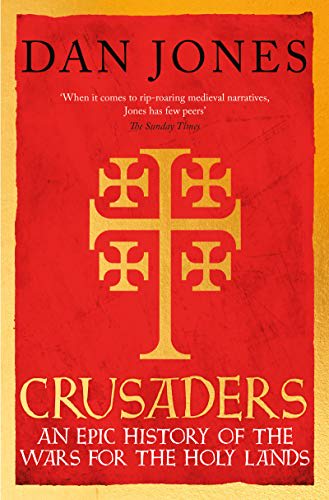 Crusaders will take you on a journey around Europe to the Holy Land, plundering the historical record for great anecdotes as you go - giving us a glimpse of what it was like to live, fight, kill and die in the medieval world.

If you want to find out what the Crusades were all about - and are looking for a balanced view - this is a great place to start.

Lots of gold, a piece of the True Cross, and some great anecdotes - Sigurd Jersulamfarer had done pretty well out of his Viking mini crusade in the early 12th Century. His trip was about a decade after the better known First Crusade which had managed, to everyone’s great surprise, to carve out a number of Christian mini-states in Palestine, including in 1099 the capture of Jerusalem.

Dan Jones in Crusaders: An Epic History of the Wars for the Holy Lands recounts the exploits of a cast of crusaders over a period of about 500 years, including Sigurd the Viking crusader.

Sigurd, a 17 year old co-King of Norway, gathered together a few thousand (now Christian) Vikings and 60 longships in 1107. Sailing past England and France, they then rounded Spain and Portugal where they fought a number of battles. Snorri Sturluson (probably one of my favourite 13th century Icelandic poet / chroniclers) notes approvingly: that Sigurd and his men captured the Muslim-held stronghold of Sintra and “killed all the people in it, because they refused to be baptized” and “made much booty there”.

After they “crimsoned”1 their spears a few more times in the western Mediterranean, the Viking crusader-marauders stopped off at Sicily to hang out with their Norman kinsmen who had overrun the island a few decades ago. From there it was on to Palestine - the holy land.

King Baldwin I of Jerusalem was delighted to have his first fellow monarch visitor and even more delighted when Sigurd joined him in a full scale attack on the important Lebanese port city of Sidon. Sigurd’s 60 ships and hordes of bloodthirsty Vikings gave the inhabitants little chance: the city surrendered after a month and a half of fighting, and it was incorporated into the kingdom of Jerusalem.

Baldwin presented Sigurd with a sliver of the True Cross as a thank you present - to a devout pilgrim / crusader like Sigurd this was the ultimate in holy land souvenirs, and marked the climax of his three year crusading spree.

From there it was on to visit the Byzantine emperor in Constantinople before journeying back to Norway overland, where he built a church to house the True Cross splinter, ruled for 20 years, went mad and died.

What is a crusader?

The great thing about this story - and Dan Jones’ book in general - is that it makes you think about the idea of a crusader in a more nuanced way. We normally associate Vikings with violent assaults on churches and monasteries - that was where the gold was after all. But here is one travelling halfway round the world to acquire a splinter of holy wood - although admittedly he was happy to plunder and kill along the way too.

So a crusader from 1099 was different to one 10 years later and different again to those a hundred years later who could just as easily be “crusading” against the wrong type of Christian - or even a Christian who happened to get on the nerves of the pope like the unfortunate Holy Roman Emperor Frederick Hohenstaufen.

They were only in it for the relics

Equally a crusader themselves would have many different reasons for going - and not just because he was a violent religious zealot2. Sigurd for example was clearly motivated by religion, but a penchant for good old fashioned profit-focussed Viking raiding must have played a part, together with the fact that he was sharing the kingship of Norway with his brother and wanted his own space - a sort of gory gap year project.

A sequence of biographies

Jones chooses a varied cast to tell his story, from the warrior aristocrats like Sigurd, to clerics like the mesmerising but malodorous Peter the Hermit, to Anna Komnene the astute Byzantine princess, to common folk like Margaret of Beverley who found herself fighting in the siege of Jerusalem, to those on “the other side” such as the image-conscious Saladin (Al-Nasir Salah al-Din).

Even when he is describing a familiar character, like Saladin above, or Richard the Lionheart, Jones tries hard to show them from a slightly different - and often mildly humorous angle - and make them human.

Each person's story moves along briskly and introduces us to a new facet of what it meant to be a crusader - as well as narrating the 400 odd year history of crusading in Spain, in the Middle East and in the Baltic.

At this point I should admit that I was suspicious of this book before I started reading it - I hadn’t read any of Dan Jones’ work before and somehow I had associated him in my mind with Dan Brown, who wrote the wildly successful and historically farcical The Da Vinci Code.

It didn’t help that the sub-title to Crusaders is “An Epic History of the Wars for the Holy Lands” - which made me think I was going to get a tub-thumping “West is Best” tale of heroic derring-do.

In fact Jones doesn’t thump his tub at all. He tells the story in a even-handed way, not shying away from the casually murderous nature of the Christian Crusaders, but not over compensating either by painting their Muslim opponents as virtuous alter-egos. He is also alive to the impact the crusading movement had on Jewish people in Europe as pilgrim-crusaders indulged themselves with massacres of entire communities as they made their way to Constantinople.

In short Jones is a thorough and thoughtful historian and my prejudice was completely unjustified!

It is a heroic tale of derring do though... in this respect Jones manages to have it both ways, revelling in the thrilling excitement of military campaigning while at the same time bemoaning the appalling suffering and loss of life.

My criticisms are fairly minor but in the interests of also providing a balanced view I will offer them up.

The book is carefully constructed to keep the reader interested and engaged, by charging along from one bloody calamity to the next. I appreciated the fast pace but after a while I found myself feeling a bit exhausted, because it never really slows down. A few meditative or reflective chapters where we readers could lick our wounds and get our breath back would have gone down well.

Linked to this: the events of the various Crusades are extremely violent. I often found myself feeling a bit sick with all the blood and gore spilling off the pages. Clearly I wouldn’t have made a good medieval knight, and clearly I can’t blame Jones for the bloodshed, but it did mean I had to put the book down and look out of the window from time to time.

Overall though this is an excellent history book.

A bit like Sigurd the Viking's crusade, it will take you on a journey around Europe to the Holy Land, plundering the historical record for great anecdotes as you go. You won't get a piece of the True Cross but you will get a little closer to a True Understanding of what it was like to live, fight, kill and die in the medieval world.

If you want to find out what the Crusades were all about - and are looking for a balanced view - this is a great place to start.