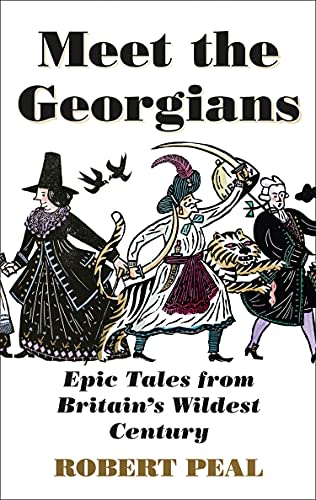 A fun but superficial romp through Georgian Britain, ‘Meet the Georgians‘ tells the stories of some of the celebrity figures of the time.

While it‘s an entertaining read, it falls short on analysis. It can however serve as a good introduction to the period.

It’s probably inevitable that if you are a historian called Robert Peal your interest lies in nineteenth century Britain; Peal’s Meet the Georgians charts the period from the coronation of George I in 1714 to the death of George IV in 1830.

As a headteacher, he describes the period as one largely ignored at school, with children studying the Stuarts and Victorians but not the Georgians in between. While this may be the case (although personally I did study the politics of the era at school [editor's note: this may have been a while ago...]), I’d argue that the period is pretty well embedded in our national consciousness through countless Jane Austen adaptations, Blackadder, and the architecture of the cities in which we live and the stately homes we visit at the weekends amongst other things.

“Regency romance” is an incredibly popular literary genre both here and in the US, with US writer Julia Quinn’s Bridgerton being made into a lavish Netflix series. However, as “Regency romance” suggests, maybe our awareness skews towards the end of the period, after powdered wigs had gone out and proto-Victorian morals had come in.

That being said, if you were paying attention while reading the Georgette Heyer novels you “borrowed” from your mum’s bookshelves as a teenager, many of the people in Meet the Georgians will be familiar.

Peal illustrates the period by telling us the stories of 14 influential and memorable Georgians: Anne Bonny and Mary Read, Bonnie Prince Charlie, John Wilkes, Tipu Sultan, Olaudah Equiano, Mary Wollenstonecraft, the “Ladies of Langollen”, Lady Hamilton, Hester Stanhope, Lord Byron, Mary Anning and James Watt. Peal claims they represent Georgian society, morality and culture because they were celebrities of their day; he says that the spirit of the day is revealed in the behaviour that people celebrate, rather than the actions of the majority.

I think it’s important that the reader, primed by the introduction to think of Georgians as “courageous, quirky and completely crazy”, bears in mind that the people described in the book were famous precisely because they were unusual.

These are not the people I learned about in my History A-level, which was heavily focused on politicians. Peal does tell us about the four King Georges in the introduction and conclusion, but the people he focuses on come from all walks of life, from various corners of the Empire. There are fighters, lovers, thinkers, adventurers and criminals; people who changed the world and people who didn’t. He claims their stories have been suppressed by the prudish Victorians, only to be rediscovered more recently.

Peal describes the Georgians as “fun-loving” and “devil-may-care”, constantly getting boozed up, singing bawdy songs and shagging around. However, it’s not really a surprise to discover that this was only really a possibility for rich, white, heterosexual men.

He assures us that “the Georgians were not afraid of female sexuality. They enjoyed reading 'Fanny Hill'”... but then tells us in the next sentence that it was banned the year after its publication for corrupting the King’s subjects. He also doesn’t mention that Fanny Hill was written by John Cleland, a man, and therefore might not be quite as representative of female sexuality as he likes to think.

Although he has carefully chosen women to be the subjects of half of his chapters, and it’s clear from their stories that they had significantly less licence or control over their lives from men, he still makes statements like “all [the Georgians] ever thought about, from the lowliest docker to the noblest duke, was shagging”. As a reader this does give one the feeling that Peal’s basic image of Georgian society is a sea of men, punctuated with the occasional very famous woman.

Likewise the story of Olaudah Equiano shows that Georgian life was not so much fun if you were not white. Equiano’s hugely popular memoir forced Georgians to face the horrors of the slave trade and slave labour in the Americas; Peal says that Georgians would not have liked to have seen the evidence of slavery in front of their eyes, but were happy to benefit from it via their imported sugar, coffee, cotton and pineapples. Equiano punctured their state of wilful ignorance.

Similarly to the rest of the book, Equiano’s story is told with the rollicking insouciance that is characteristic of the book, which sometimes makes it hard to see beyond the adventure to the struggle beneath. Peal does remind us that Equiano’s experiences, while terrible, were far better than most slaves; his ability to talk his way out of situations and charm people does seem to make him fit in with Peal’s view of the Georgian way of life.

We are not amused (anymore)

Even if licentiousness with little consequence, like voting, was only available to a few, it is still a fair point to contrast it with the Victorians, given how large the Victorians loom in our collective memory. Peal recalls a guest lecturer at his university who specialised in Georgian culture who commented that the hedonistic culture which began in the 1960s was not a new thing but rather a restoration of Georgian values.

I found this to be an interesting way of thinking about it; maybe the Victorian stiff upper lip is the anomaly while sexual freedom and public emotion is our true national character, if such thing exists. Peal thinks that someone from the 21st century would fit rather well into the eighteenth; the same is probably true in reverse, although it’s probably no bad thing that Lord Byron didn’t have access to TikTok.

The book is written with a casual exuberance which fits well with Peal’s description of the Georgians but which may not be to everyone’s taste: “His name was Horatio Nelson, and he was the bravest, most ass-kicking admiral in the entire Royal Navy” is a fairly representative example.

The style lends itself to a certain superficiality and a tendency to skim over unpleasant issues; for example, various incidences of Byron’s cruelty to his wife are recounted, with Peal describing it as “sadistic bullying” but continuing to write about Byron with a kind of breathless admiration. Especially in the chapters about Bonnie Prince Charlie and Tipu Sultan, mass loss of life is described very casually.

While I wouldn’t recommend it to people who like weighty tomes about serious matters, its style makes the book easy to read and very vivid - a bit like Horrible Histories but with more sex and less balance. As a reader you’re really drawn into the world, whether of swashbuckling pirates, swooning poets or crazy adventurers.

Personally, I got a lot of enjoyment out of this romp through the Georgian era. It was interesting to read in more depth about people whose names I have heard and read in passing, to discover historical figures I hadn't heard of, and to learn more about an era which already felt familiar.

It was entertaining and untaxing - light relief which has whetted my appetite for more in-depth Georgian history. It’s a compliment to the style that it carried me along, and it was only afterwards, while thinking about it properly for this review, that I really began to notice some of the problems with it. It’s excellent storytelling, but perhaps not excellent history.