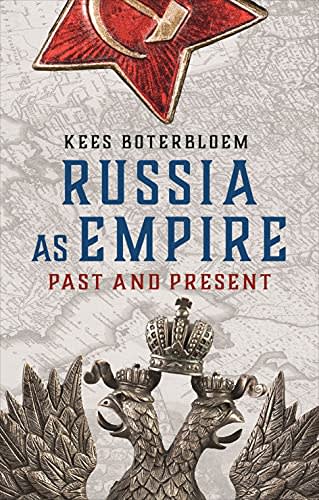 Russia as Empire is a handy pocket-sized primer on Russian political history over the last thousand years up to 2020 (to just before the invasion of Ukraine).

While it doesn’t provide any great depth it is fair and balanced. I would strongly recommend it if you want to find out more about Russian political history and are looking for a place to start.

I got this book because I wanted to better understand how Ukraine finds itself in its current terrible situation.

At the time of writing in early April 2022 Ukraine is partly occupied by Russian forces who have caused immense suffering and damage, on the ludicrous pretext of eradicating Nazism. It is clear that their intention was to take over the whole country, but so far they have not been able to do so. The Russian army also appears to have seen significant numbers of soldiers killed and wounded.

When searching through our database of history books which shows all popular history books published in the UK from 2019 onward, Kees Boterbloem’s Russia as Empire: Past and Present seemed to be the most useful book on the (pretty short) list.

It provides a concise summary of the last 1,000 years of Russian history. In other words all of Russian history, right back to the semi-mythical Viking foundation stories. It goes up to 2020, so the Russian annexation / invasion of Crimea has happened but the invasion of Ukraine has not yet.

Boterbloem wants us to appreciate the huge changes that Russia has gone through over those 1,000 years and the complexity of its history. In other words: seeing the current Russian government as one in a long line of bad eggs who have been bent on domination since they first got rid of the Mongols... is not accurate and doesn’t help us understand and engage with Putin’s government, bad egg or not.

So what have we got? Boterbloem divides Russian history into five parts:

Each period is markedly different to the one that went before, and there is only limited continuity between the respective “Russian” states, except that they were based on similar territories, with Moscow at their political centre.

Early modern Muscovy in particular was quite new for me, and I found the ups and downs of Russia at that time remarkable. Starting with Ivan III (1440-1505) who managed to massively extend Muscovy’s power by annexing the important northern trading city-state of Novgorod and its huge territories. He also saw off the still potent Mongol khans in 1480. Last and not least he secured a huge political coup by marrying the niece of the last Byzantine emperor.

Things were looking up.

But a mere few decades later, the Muscovy lands were being ravaged in a disastrous war against the then mighty combo of Poland and Lithuania. The disaster was compounded by a Crimean Tartar raid in 1571 that took and burnt Moscow, capturing thousands of Muscovites who were sold on the Black Sea slave markets.

Ivan IV3, then in charge, became increasingly psychotic, and in one episode killed his oldest son.

After this things went even further downhill and Russia almost ceased to exist as a state in 1610, at which point the first Romanov Tsar was proclaimed.

What does this tell us about today?

Does this have any bearing on the current Russia-Ukraine conflict?

Not directly. In some ways it is encouraging that a war like this one is so widely condemned given that a few hundred years ago similar conflicts were an acceptable aristocratic pastime. But the see-saw nature of Russia’s history, where calamitous defeats happen with some regularity, does provide insight into the Russian government current paranoia over border security.

Or as Boterbloem puts it, writing in 2020: “the recent behaviour of the Putin government with regards to Crimea and eastern Ukraine does at least become more intelligible” - although, he adds, this does not extend to excusing those actions.

The dangers of over-simplification

The problem we are dealing with for understanding any event is that there is rarely a simple cause. In the current context: the decision Putin took to invade Ukraine must have been done with many different motivations (and no doubt a few reservations) and been influenced by many different people. The Russian government's official view of Ukrainian history - ie Ukraine is essentially just a part of Russia - is presented as one of these reasons by the Putin Government but it comes across as a weak after-the-fact excuse.

Does this mean that there is no useful information in Russian history - or history in general?

There are useful things to learn because history frames the actions of people today - it shapes and often limits our imagination. One of the reasons why Putin chose to invade Ukraine rather than say Finland or Sweden is their close history4.

The book is short at just over 200 pages and the style is chatty and easy to read. The chapters are brief and there are lots of black and white photos to go with the text.

Despite being short this is not a superficial narrative account. Boterbloem clearly knows his stuff and has known his stuff for some time.

This makes it an excellent book for those wanting an introduction to Russian history: the author picks his details carefully and never lets the flow of events or new people overwhelm the reader.

Any bones to pick?

The main thing to be aware of before buying this book is that it is very much a political history. It never strays too far from the doings of rulers and foreign policy. If you are looking for something on ordinary life or Russian culture you will have to look elsewhere.

I should also note - more as a criticism this time - that there is no strong argument to the book. We get hints of something when Boterbloem warns us that it is a mistake to consider the Russian state as an intrinsically aggressive, expansionist empire - the historical record doesn’t support this view. But his point doesn’t really get developed further.

For instance, just because a government will not inevitably take a certain action, this doesn’t preclude them from doing it anyway. It was not inevitable that the Russian state would invade Ukraine... but it did.

Russia as Empire is a handy pocket-sized primer on Russian political history. I would strongly recommend it if you want to find out more but don’t know where to start.

While it doesn’t provide any great depth it is fair and balanced. And popular history books - and authors - like this one are key if we want to know what happened and avoid falling prey to the cynical mendacity of those who would treat the past as just one more tool of control.