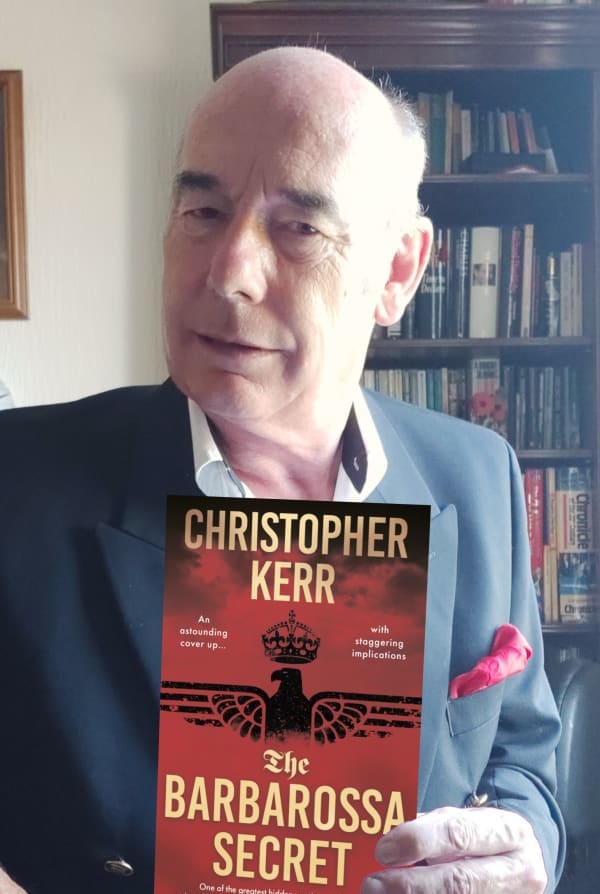 Christopher Kerr with his latest book, The Barbarossa Secret.

Tell us a bit about yourself and the books that you have written...

I have always had a love of history and of writing. Before I retired I was an entrepreneur and wrote a lot of marketing materials, brochures that kind of thing. But that was not really the kind of writing or story-telling that I wanted to do.

Then one day I was offered a bet by a friend: could I write the start of a great story before the next morning...

So I put something together and sent it to her. She became very excited and said that it was fantastic and that I had to finish it. And that became the prologue to my first book.

Since then I have finished one more - The Barbarossa Secret, which is being printed as we speak - and nearly finished another which I hope will find itself onto bookshelves towards the end of the year.

What is the role of history in your stories?

I’m a writer of human drama set against a historical background. But the reality of well researched history provides a depth that otherwise you wouldn’t get. People will say “I wonder is that fiction?” and that fascination holds the reader’s attention.

How historically accurate are your novels?

I carry out forensic historical research.

For example today I have been carrying out research into a scene with Adolf Hitler in the Reich Chancellery in Berlin in 1945. I have gone to the umpteenth level to establish what pictures were on the walls, which pictures were removed because of the bombing... what furniture was where, which staff were on duty. I get really crazy about this. The idea is that if anyone wants to check it will all stack up.

I think this gives an extraordinary depth to the story. It creates a sense of reality and draws you in.

What’s your latest book, The Barbarossa Secret all about?

It follows a period of history that has been at best not explained and at worst covered up. It traces the attempts by Nazi Germany to infiltrate British society before the war and the influence that they managed to establish during the war.

Adolf Hitler never wanted to go war with Britain - he considered Germany and Britain natural allies. His ambition was to destroy the “barbarians” in the Russian regime, which resulted in the biggest land-based operation in history: the invasion of Russia or Operation Barbarossa.

Hitler’s attempts to avoid war with Britain and deal with the situation when they were at war forms the plot to my book. It reveals that there was under consideration a pact with the Germans against the Russians.

Some of the material in my book is quite explosive, at the highest levels of society, including royalty, government, aristocracy...

Where does the truth stop and the story start? When we read this book how do we know what is true and what isn’t?

I think you don’t. I’m a fiction novelist not a writer of history. I’m telling a story to entertain and make people think. I leave it up to the reader to decide - I’m not trying to persuade the reader one way or another. People will wonder: is that real? Did the King write those words in that letter?

What I do want to do is make people question history.

For example, looking at World War 2, we have the bodies of most of the leading Nazis or they were in captivity. We know where they are. But where was Hitler? What happened? The Russians said that they had his body but then produced the cranium of what turned out to be a woman. We have to start thinking: what’s going on?

Ok but taking the example of Hitler’s death, is there a risk that you create the space for more conspiracy theories i.e. allow people to get even more crazy?

Any historical novel will have that. For example when writing about Henry VIII we don’t really know what he said but we have to interpret for him to make a story. I’ve interpreted history to make what I think is a powerful read.

And what about all the books written about the assassination of John F Kennedy? Are people wrong to write these books? I don’t think so. I think it makes it interesting - and perhaps makes people look into it.

And if it does make people question sometimes that’s no bad thing. We need to sometimes question the narrative we are fed.

When I'm writing novels I'm perverting the course of history... but hopefully this will draw more people into looking at the past.

I think fiction can enrich history rather than create worrying conspiracy.

There is a lot of dialogue in your book. Do you think putting words in the mouths of your historical characters increases your own understanding?

I think so. We get a very wooden picture of history because we don’t get people interviewed on the record as we do today. In those days you treated your political masters with deference.

To bring characters to life and make them three dimensional with dialogue can be helpful.

One of the most difficult things I had to do in the book was to write from Adolf Hitler’s perspective. There was no point in painting him as some sort of creature from the deep, because he won an election, and the loyalty of many people. So we have to be careful about writing him off as crazy.

I studied a lot of newsreel footage of Adolf Hitler. I listened to the few recordings we have of him talking normally. I watched his body language intensely. And I’ve replicated that in this book. And I think I’ve brought him to life.

I don’t want to be seen as a supporter of the perverse philosophy of the Nazis but I think it is important to understand people.

I agree. If you write about a cartoon-like historical character it doesn’t increase your understanding. It doesn’t help you to think about what might lead to a similar situation nowadays.

Speaking of which, how has writing about the past changed your view of the world today?

I think it has enriched my view of the present.

You can see the wonderful motives that some people had, the sacrifices that people made for their beliefs. In many ways it reinforces belief in the positive side of human nature - it can be heart-warming to read.

But it also alarms because of the corruption, the lies and the deceit. And the lives lost.

What I have unfortunately taken from my study of history is that truth gets sacrificed everywhere.

In the British case my belief is that it is too easy to veil facts under the official secrets act. There were some dreadful decisions that had to be taken during the second world war... and some that didn’t have to be taken - and they both get covered up.

Do you think there are general lessons that we should be learning from the past.

Yes I do. There is so much to be learned from the past, in seeing where the positives and the negatives have happened. For example World War One was meant to be the war to end all wars. The loss of life was staggering. So they set up the League of Nations to prevent another war happening. Did it work? No it didn’t, but we have to learn from that.

Germany was unfairly treated by the Treaty of Versaille which left space for the Nazi party to seize hold.

To punish a nation to that extent - like Germany after the First World War - you will create extremism. This is a risk in Russia at the moment.

We shouldn’t hide from history.

I’m going to be a bit controversial here. When paintings get taken down from National Trust properties showing people in slavery is this right? My view is that we should allow people to see them, so that we can learn from them.

Tipping statues into the harbour in Bristol is not trying to learn from history that’s trying to censor history.

But thinking about how politicians refer to history - usually not with scrupulous accuracy front of mind - are we doomed to failure in our efforts to learn from history?

Funnily enough I almost became a politician myself in a safe seat, before pulling out because I can’t stand the “ya boo” nature of modern politics. But you are right we should learn from history but don’t always.

So how do you know who to trust when it comes to interpreting history?

I don’t think you do. Anyone who writes a historical piece will come at it from their perspective, from their research. You will need to use judgement.

When I am research history I take a judgement based on the facts that I can gather, and perhaps all historians have to do the same thing. It’s a bit like a police investigation you have to make your mind up on the evidence you have deduced.

As you know on this site we are big fans of popular history books! Are there any history books that you have recently enjoyed and can recommend?

I haven’t had much time to read since I have started writing but my bookshelves are absolutely stuffed with history books, mainly biography. One book I found incredibly useful for my book was the biography of Lord Louis Mountbatten.

Do you have any more historical novels in the works?

I have almost completed my third book which is called Fission. This is a book which explores the history of the greatest and most horrifying deterrent. And the corruption and power struggle that went on behind the scenes in Britain, the United States and Israel. In telling this story I also unlock the secret behind one of the greatest conspiracies in modern history. I don’t want to give too much away but the book cover will perhaps give a hint of it.

Publication will be towards the end of the year - assuming that I haven’t been put in the Tower of London in the meantime!