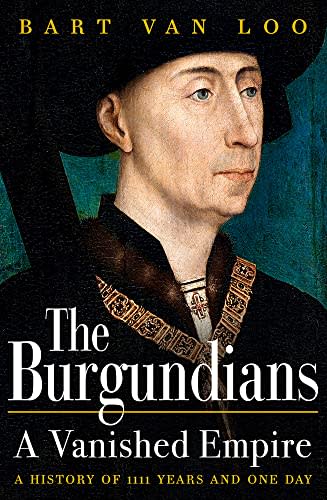 At its core, this book contains a fascinating and colourful story about four generations of one powerful French ducal family. But, at times, that story can feel bogged down in a hodgepodge of other narratives and information.

Overall, it is an entertaining read, but it would have benefited from being a bit more focused.

Written by a Belgian author in Dutch, and translated into English, this book tells the story of the 'Burgurdians'. But who were the 'Burgurdians'? That is a good question. After reading the 514 pages of this book, I had learned a lot, but remained a little confused about the answer to that central question. Perhaps the best way of getting to grips with the Burgurdians is to recount, very briefly and simplistically, the key events covered in this book.

Act 1: The Burgurdians enter the scene

A long time ago, there was a Germanic tribe which originated (possibly) in Bornholm, now a Danish island in the Baltic Sea. Over the centuries they migrated their way across Europe until they reached the River Rhine sometime in the 3rd century AD.

Act 2: Kingdom of the Burgundians

In 406, together with a number of other Germanic tribes, the Burgundians crossed the River Rhine into the then Roman Empire. That was part of a series of destabilising migratory events in 5th century Europe which contributed to the disintegration of the Wester Roman Empire. In its wake, the Germanic Burgundians established their own kingdom as one of the successor states to the Empire. That tribe gave their name to what we now refer to as the French region of Burgundy, although in fact modern Burgundy represents only part of the region of the Roman Empire originally settled by the Germanic Burgundians.

In 532, the Burgurdians were defeated by the Franks at the Battle of Autun and shortly thereafter their kingdom was incorporated into the Merovingian Frankish kingdom.

The bit which follows is then very confusing, but essentially from the 9th century onwards the name 'Burgundy' got attached to a duchy within the Frankish realms which overlapped, in part, with the historic kingdom established by the Germanic Burgundians. It is that duchy which correlates, more or less, with the region of France known as Burgundy today.

The male line to the original French aristocratic family to hold that dukedom died out in 1361, at which point it reverted to the French crown.

In 1363, the duchy was given by King John 'the Good' of France to his fourth son, Philip 'the Bold' (an appellation he earned at the age of 14 in 1356, fighting next to his dad at the Battle of Poitiers).

Act 4: The heart of the book – the four megastar dukes

What follows is then the real meat of the book, and undoubtedly a great story to tell.

Philip 'the Bold', his son John 'the Fearless', his son Philip 'the Good' and his son Charles 'the Bold' (although, we are told, the French word might translate better to the 'reckless') used shrewd marriage alliances and diplomacy to expand their control across a vast swath of land lying between France and the Holy Roman Empire, including most of the Low Countries, then probably the richest region in Europe. Those dukes come across as extravagant, larger than life, personalities, using their wealth and power to emerge as among the most powerful families in Europe. They were patrons of the arts, promoting the careers of Claus Sluter, Jan van Eyck, Rogier van der Weyden and Hugo van der Goes among others. They built magnificent buildings, such as the Champmol Monastery just outside Dijon, then the capital of the Duchy.

To use modern terminology, the dukes were a bit 'bling', and were adept at milking their rich territories to fund their ostentatious tastes. Clothing covered in jewels and rubies and insanely over the top feasts feature prominently. One such feast included 48 courses, a statue of a naked women with wine pouring from her nipples and one of a naked boy peeing rose water (presumably a prototype for the Manneken Pis), a giant pie with musicians in the middle, diamond-encrusted crystal table fountains and a lion (a real one).

In fact, those feasts are a recurring theme of the book, each duke seeming to want out to outdo his predecessors. After a while, one absurdly over the top feast started to merge into another and I began to find it all a little tedious, as I'm sure a few of the guests did as well. The dukes no doubt would be appalled by my standard evening meal of shredded wheat with semi skimmed milk.

Killing and getting killed

The dukes also liked to throw around their weight politically. John the Fearless arranged for the King's brother, the Duke of Orléans, to be assassinated. John the Fearless was then assassinated himself, probably on the orders of the French dauphin, the future Charles VII of France, who was present when it happened. In revenge, the next duke, Philip the Good, allied with the English against the French in the Hundred Years' War, leading to a period of English domination of France. When Joan of Arc came into Philip the Good's custody, he handed her over to the English, who then burnt her alive for heresy (at the age of 19 years old).

Charles the Bold harboured ambitions for his lands to become a separate kingdom, and at one point was even mooted as a possible Holy Roman Emperor (but all that ostentation apparently alienated the straight-laced German princes whose job it was to elect him). In fact, the Charles the Bold had a distinctly unsympathetic personality and his brutality and ambition eventually irritated so many people that he got himself killed at the Battle of Nancy in 1477 by Swiss mercenaries.

The story of these four dukes and their times is a fascinating and important one. A book on this subject can hardly fail to be entertaining. But, for some reason, I found this book a slightly frustrating one to read. Why was that? Essentially, the problem is that I was never entirely clear what story the author was trying to tell. This is because, whilst plenty of information is given about those four dukes, the author tries to integrate them into a bigger story, starting off with the Germanic Burgundians and ending with the political development of the Low Countries, which eventually resulted in the formation of the Netherlands and Belgium. But, in my opinion, that attempt at a larger coherent story doesn’t really work.

A duke by any other name

Firstly, the link between Philip the Bold / his descendants and the Germanic Burgundians is a little tenuous, apart from the name attached to the duchy which was given to him by his dad. The author tries to draw a connection, by suggesting that the 14th and 15th century dukes saw themselves as successors to the Germanic Kings of Burgundy. A longer perspective might well make sense if the focus on the book remained on Burgundy itself but, from the 14th century onwards, the author focuses much more on the regions of the Low Countries acquired by the dukes; in fact, Burgundy itself is strangely absent from much of the book from this point onwards.

A history of the Low Countries?

Instead, the book seems to be driven by an underlying and implicit thesis: that it is possible to tell the story of the Low Countries by using the Dukes of Burgundy as the starting point and building from there. But, if that was the idea behind this book, it left me unconvinced.

It's who you know

A reader gets the impression that, for the author, history (particularly, in this case, the history of the Low Countries) is principally driven by the marriages and child bearing abilities of a handful of powerful people. Is that true? The author himself gives plenty of evidence of the Low Countries amounting to a lot more than this. It is clear that they were forged by geographic, linguistic and economic factors quite independent of the dukes which acquired them. Furthermore, the rich cities of the Low Countries, in particular those of Flanders such as Ghent, clearly had strong civic identities, and these manifested themselves repeatedly in conflict between those cities and the dukes.

Telling the story of the Low Countries by focusing on the Burgurdians struck me as lopsided. The analogy is far from exact, but it felt a bit like trying to tell the story of England by starting off in Scandinavia, following a group of Vikings to northern France and then over to England for invasion in 1066, with background information on Anglo-Saxon England thrown in. In the end, you would be left confused whether you had read a book about the Normans or one about England.

Get to the point

And this lack of overall coherence in subject matter is compounded by a slightly digressive writing style. To give an example, the author clearly knows a lot about art history, and the descriptions he gives of famous artists and their works are, in isolation, compelling. The problem is that they are not well integrated into the book – they are often thrown in part way through telling a different narrative. Generally, the writing style does not always flow easily, and reading through the book at times felt a bit like a bit of a slog.

The above comes across as quite negative. What about the positives? The author has a lively and entertaining writing style and a wry sense of humour, which can make the stories recounted compelling reading. Read in isolation, the various segments and chapters of this book would come across very well. The author is clearly passionate about art history, and anyone interested in this field will be well rewarded by reading this book. Plus, as mentioned above, the subject matters of this book are interesting and important, perhaps not as well known to English language readers as they should be.

A good example of the importance of editing to a history book; sometimes, less is more. But this book will reward any reader with an enjoyable read, and its raw materials are made up of a wealth of fascinating insights and information.