A New History of the Middle Ages 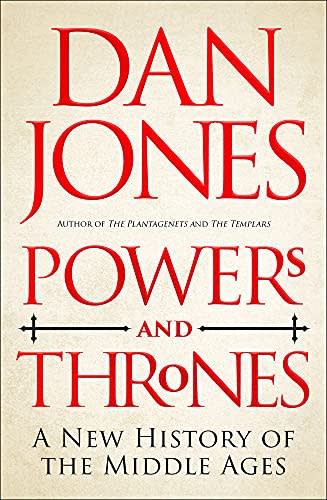 Dan Jones‘ latest book explores the Middle Ages as a whole, drawing together many of the subject matters he has previously written on. The result is a long but very entertaining read full of full of fascinating story lines and personalities.

After reading this book, I asked my dad to buy me Dan Jones' Plantagenets for Christmas. So I clearly enjoyed reading it. At 639 pages long (excluding index and bibliography) it makes light work of a 1,000 years of predominantly European history. In the opening few pages we are promised 'it is going to fun' and it delivers. We are given larger than life characters (including a fair few homicidal maniacs and religious nuts) sweeping narratives and pithy summaries. It was a very entertaining read.

What were the Middle Ages?

Right from the start of this book, the author gets to grip with the central question of what the Middle Ages were: it was invented to indicate the bit in between the ancient world and the modern world. For Renaissance thinkers, it was a regrettable (albeit long) interlude of ignorance and squalor. So much so, in fact, that the terms Dark Ages and Middle Ages were originally interchangeable.

Today, the expression Dark Ages is frowned upon by historians: academics speak of economic simplification rather than decline after the fall of the Western Roman Empire (which does make me wonder whether the word simplification is an unexplored avenue for politicians to spin the next recession); and, in any case, thinking of one period of history as being better or worse than another is considered unhistorical.

But it seems that historians have debunked the original rationale for inventing the Middle Ages without coming up a plausible alternative.

So we are stuck with the Middle Ages whether we like it or not; and personally, I'm perfectly happy with it: having read this book, and recently watched the movie The Last Duel, I can't helped feeling that the Renaissance idea of the Middle Ages may have been on to something.

The structure of the book is a mix of the chronological and the thematic: it starts with the fall of Rome and ends with the Reformation. In between, things run broadly in order of time, but with chapters split into big themes: Arabs, Mongols, Monks, Knights and Crusaders are among those who get their own chapter.

Dan Jones' style is unfussy but authoritative; in that sense, it is an excellent example of popular history writing at its best. If are looking for an entertaining and informative overview of what was going on where and when during 1,000 years of Western history, this book will not disappoint you.

Is there anything I didn't like about the book? Not to any significant extent. One of its notable characteristic is the author's tendency to draw modern comparisons with the events, people and institutions he refers to. I don't think I have ever read a history book where this is done so often. So, for example, the soft power of Cluny Abbey is compared to the influence wielded by modern tech entrepreneur such as Jeff Bezos and Mark Zuckerberg; the writings of Plutarch compared to modern hip hop artists. There is a section regarding medieval 'wokeness' (i.e. the way universities suppressed opinions that were considered unpalatable to medieval sensibilities). A paragraph regarding a dispute between Bernard, King of Lombardy, and King Luis the Pius includes a footnote which simply states 'See also: Brexit'.

I suspect this will irritate some, but not others. Personally, it didn't bother me; I think such modern comparisons can be interesting, if used in the right way. In this book, I felt occasionally like they were being thrown in a bit willy-nilly in an attempt to make the book relatable to modern readers. Perhaps fewer of these types of comparisons, but the ones used more thought out and explored, would have worked better. There is also an interesting question of how such comparisons will work in the future – will a reader in 2221 understand what is being referred to (or empathise with such references even if they do understand them)? How would we feel about reading a history book written in 1821 about the Middle Ages full of references relevant to that time ('See also: struggle for Greek independence')?

Personally, I'd find it quite interesting, so perhaps Dan Jones' book has a future as a text shedding light on both the Middle Ages and the world of 2021.

Always include a conclusion…

Overall, I thought that the earlier chapters worked a bit better than the later chapters. For example, the chapters on Knights, Monks and Crusaders were very interesting. The final few chapters also contained lots of fascinating information, but perhaps did not work quite so well as a whole: for example, the section on the Renaissance gives pen sketches of a handful of important writers and artists, but appeared to lack an overarching narrative or theme (there is something about rich and powerful patrons but it is not really drawn out).

I got a sense towards the end of the book of a degree of lethargy creeping in; the narrative did not flow quite so easily. Unusually, the book doesn’t have a conclusion; and given the breadth of the subject matter I felt it could have done with one. A conclusion would have been a good opportunity to tie together the various narratives and themes explored in the book and provide some overall coherence to the subject matter.

This book is very engaging, easy to read and full of fascinating stories and characters. However, I would be interested to read a bit more about what Dan Jones thinks the Middle Ages were; what were its distinguishing characteristics and what continues to make it a relevant way to sub-divide European history?

At the end of the book, Dan Jones describes in detail the changes that brought the Middle Ages to an end: the Renaissance, the Age of Exploration, the Reformation. No doubt these were epoch making changes, but in what way were they un-medieval? I hope this is not the last we have heard from Dan Jones on the Middle Ages – there is definitely room for another book which asks and answers some bigger questions.