A New History of the Aztecs 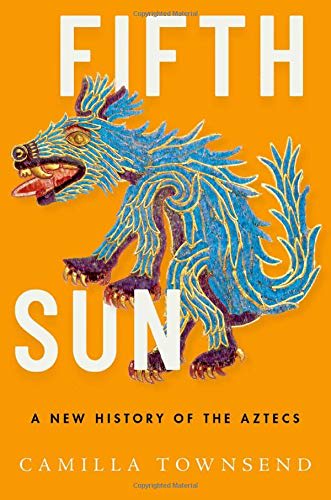 Fifth Sun does a great job of getting us 21st century readers as close as we can currently get to the lost world of the Mexica, and certainly closer than any other account I have read.

It also brings some daylight to a time that has often been shrouded in darkness: of the Spanish conquest or the brutal sacrificial politics of the Aztecs. It reminds us that life goes on, and you may even find one or two happy endings.

If Flamingo Snake was going to get out of the palace alive he would have to drum with all the exuberance, the raw power that he possessed.

It shouldn't even have been him leading the show: the chief musician had fainted - perhaps from terror - and Flamingo Snake (Quecholcohautl, pronounced Ke-chol-CO-wat) had taken over the starring role at the last minute. For he and his men to survive, he would need to put all this out of his mind and instead focus on all his attention on his drum and his song: a protest song directed at the most powerful leader in the known world.

The ruler's name was Axayacatl (Ah-sha-YAHK-at) and he was the Mexica Emperor, a people known more commonly nowadays as the Aztecs. It was 1479: 13 years before Columbus would discover how to sail from Europe to the Caribbean and exactly 40 years before the ruthlessly destructive Hernan Cortes would arrive on the coast of Mexico, and confront Moctezuma II, Axayacatl's son.

Flamingo Snake's fears were not groundless, being a drummer was a hazardous occupation even then. Performers who had let the side down in other recitals had been known to be punished. And his song contained a highly inflammatory political message which could be roughly translated as: 'ok we rebelled against you and a lot of people died, but this was 15 years ago now, my hometown is being treated very badly and we deserve better: we want a seat at the table and perhaps even a piece of the pie'.

Given this message it was not unreasonable for Flamingo Snake to fear one of the Mexica's more horrific sentences: being burned alive in a wooden cage.

To start with the Emperor appeared to pay little attention: perhaps he was thinking about what might be for lunch, or perhaps it took him a while to grasp the allusion, because the song Flamingo Snake was singing was on the surface a song by a female prisoner of war who was bemoaning her terrible fate. But about halfway through, the Emperor perked up and began to dance to the music:

When he got to the dance floor, Axayacatl lifted up one foot, completely happy in hearing the music, and began to dance and move in circles

But when the song finished, ending with an offer from the female prisoner of war, now a concubine, to live with the king with no hard feelings, if only she were treated with respect... the Emperor suddenly left the room saying nothing.

When Flamingo Snake received a message that the Emperor wanted a word with him, fear was the natural reaction.

It was also, as it turned out, completely the wrong one. Camilla Townsend tells us what happens next in Fifth Sun: A New History of the Aztecs:

the Emperor 'liked the song, and he liked the singer. He took Quecholcolhaultl [Flamingo Snake] to bed forthwith and asked him to promise to sing only for him.'

Bringing the Mexica back to life

This historical anecdote encapsulates what Townsend achieves with Fifth Sun: the Mexica come from a different cultural world which we can never completely reconstruct. But at the same time they are human beings with behaviours and reactions we can sympathise with and understand.

It is a tricky undertaking. If Flamingo Snake for example, were to read my brief summary of his story would he recognise the scene, or himself? Was he surprised that Emperor was bisexual - and did that even mean anything to the Mexica?

But Townsends book does a great job of getting us 21st century readers as close as we can currently get to this lost world, and certainly closer than any other account I have read.

For me the two things that mark this book out are:

In their own Nahautl words - using the Latin alphabet

Townsend has dug into the surviving literary sources in a way which few (none?) other popular history writers have previously done so. Although she is looking at the same sources as other historians she is giving less weight to the Spanish bits and far more to the Nahautl language (Latin alphabet) parts which have tended to be overlooked, under-translated, or dismissed as ''myths and legends''. By immersing herself in the Nahault histories of the Mexica Townsend has untangled and given voice to many fascinating stories from the pre-conquest world.

The Spanish conquest as a beginning as well as an end

Townsend also covers a much broader spectrum of time than we normally see. While her starting point of the Aztecs migrating down from North America to the central valley of Mexico is fairly typical, her end point is certainly not: she finishes in the 1620s, a hundred years after the Mexica empire was violently overthrown by the Spanish.

We end up with three main sections:

As with her treatment of sources, this gives a far more nuanced understanding of what life was like for the people of this time, and how it changed.

Living with the neighbours

For example I found it fascinating to read about how the Mexican and Spanish people interacted, inter-mingled or remained separate when the Spanish were firmly in charge.

This is partly seen through the life of the eldest son of Hernan Cortes - Cortes had sons by many different women and seems to have called most of them Martin. His first son (Martin) had as his mother the famous Malinche, a Central American women who was a one time slave and now sworn enemy of the Aztecs. Martin - a devout Christian - lived his life moving between Europe and America and was a childhood friend of Philip II of Spain.

Martin was clearly accepted in European society, and he wasn't alone in this. Other children of mixed Spanish and central American (aristocratic) parents were also very much part of the community.

So while the experience of conquest was often horrific and terrible... for those that weren't destroyed by the Spanish or disease life went on and Central American people found ways adapt to their new reality. However they did not forget their past and sometimes wrote it down: this is what Townsend has worked so hard to interpret and bring to the readers of this book.

The book covers a lot in its 200 hundred pages. However it is not a quick read and not only because the text is very small! Townsend has a clear and approachable writing style but the story can get pretty dense - particularly in the earlier part of the book where we are given a whistle-stop tour of Central American power politics. Because every ruler would have tens of children all from different wives from different towns, who would then tussle for power at succession time, it is hard to keep a handle on what is going on, even with an accomplished narrator to guide us.

Partly this is a problem of familiarity - if you threw a dozen UK place-names at me I could take it in my stride but a dozen pre-conquest Mexica towns are a different matter. They just take longer to get your head around. Which isn't of course, to say that you shouldn't...

The narrative becomes clearer from the point at which the Spanish arrive, perhaps again because this is well-trodden ground.

The 'who's that again?' problem is then the biggest difficulty with this book, but at the same time this is the whole point of the book! If it was just about people, places and politics that we already knew about, why would we read it? While Townsend does her best to limit the pain - for example by literally translating names such as Flamingo Snake - it cannot be totally avoided if we are going to gain our glimpse into a very different time and place.

Fifth Sun brings some daylight to a time that has often been shrouded in darkness: the darkness of the Spanish conquest or the brutal sacrificial politics of the Aztecs. It reminds us that there are also happy endings: like Flamingo Snake's for example or those Mexican people who soon lived after the conquest and found fulfilment in their lives.