Capital of Empire, Crucible of Europe 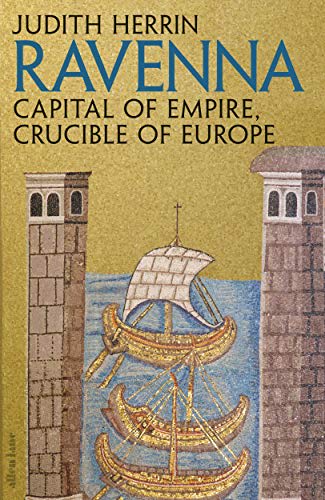 Ravenna is an absorbing and compelling read. Celebrating the achievements of a town that was building a new Christian world, it is also about the entire Mediterranean area and beyond. 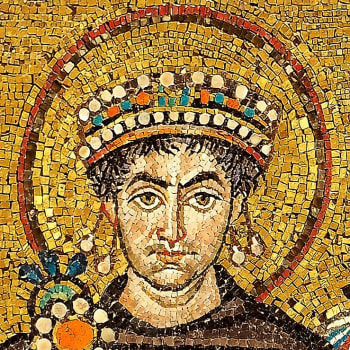 This is the celebrated Byzantine Emperor Justinian who is credited with reconquering the Western Roman Empire through his general Belisarius. The image itself is not from the capital Constantinople (now Istanbul) as you might expect, but instead from the small Italian city of Ravenna, on the north east coast of Italy. It is a photo of a wall mosaic from a 6th century church called St Vitale. It is also the motif of this website.

So how did this image of a Byzantine emperor end up in a small out of the way town in Italy, and next to the altar of a church of all places – and then as a logo on popularhistorybooks.com?

It was to answer this question (the first one) that Judith Herrin wrote Ravenna: Capital of Empire Crucible of Europe. Up until now we are told, although lots of people were happy to admire the shiny gold portrait, they hadn’t given much thought about why it was there in the first place.

The story starts with the fall of the Western Roman empire, but the hero of this book is (unusually) the man held responsible for pushing it over the edge. This is the Gothic leader Theodoric. Born in 453 CE, he spent his formative teenage years as a hostage in Constantinople, before being released as a young man back to his home region of Hungary. Rather than put his feet up, he immediately began to launch attacks in the local neighbourhood. But as well as being a war leader Theodoric was a master politician, insisting on his everlasting loyalty to the Roman empire (i.e. what we would think of as Byzantium or the Eastern Roman empire) while at the same time plundering and capturing key imperial strong points and territories.

It is a strategy my youngest son also seems to have got the hang of: when told to stop throwing lego / bashing his older brother / generally causing trouble by his parents, he will cheerfully agree – and then go back to whatever he feels like doing anyway. While as parents we are not fully satisfied with this outcome, we at least appreciate his token gesture of compliance.

The road to Ravenna

In 487 CE (ie when Theodoric was 35 ish) he marched his now huge force of Goths to the monumental walls of Constantinople. He couldn’t take the city but neither could the Byzantine emperor defeat such a large group. So they cut a deal. In exchange for going away and never coming back, Theodoric and his force were permitted to conquer the Western Roman empire, under the usurper Odoacer who was at that time in charge of Italy with his capital in the small but defensible city of Ravenna.

After a long march, a few touch and go battles and a lengthy siege, Theodoric took Ravenna and personally executed Odoacer, allegedly claiming “there wasn’t a bone in this wretched fellow”. Odoacer may have been a usurper but he was still a member of the Roman military elite. Theodoric’s successful campaign brought an end to all that and was the start of “barbarian” rule of Italy.

Except that… after reading Judith Herrin’s book it is hard to think of him as at all barbarous. He built new religious buildings for his own Arian flavour of Christianity, while protecting Catholic institutions, and also respecting the Jewish faith, marking him out from other leaders of his time. He also rationalised the rule of law, patronised philosophers, and deftly balanced gothic and Roman traditions. One of the many amazing colour illustrations in this book is a gold coin showing Theodoric – the only image of him that remains – sporting a natty Gothic moustache and a Germanic perm bowl-cut hair-do, but dressed up in Roman imperial clothing and holding a Roman eagle to celebrate victory.

Under Gothic rule Ravenna thrived, and this continued under direct Byzantine rule, after the city was captured by the famous general Belisarius when he conquered the heirs of Theodoric on behalf of the emperor Justinian in 540 CE. It was Ravenna that was the capital of the Byzantine “Exarchate” of Italy and surrounding area: while Rome continued to contract and crumble, Ravenna grew in splendour. And it was the artistic precedents and achievements of Theodoric that then inspired the famous golden wall mosaic of Justinian shown above – although Theodoric himself was “mosaic brushed” from history. As Herrin puts it:

“The unique representation of Justinian and Theodora right in the sanctuary of a very unusual octagonal church was their response to Theodoric’s blazing presence in his golden palace church… But… the images of the heretic Arian king and his courtiers were cut away. The central space that had been Theodoric’s was filled with gold tesserae… Of Theodoric’s portrait not even a fingernail survives.”

The story is then traced all the way through to the “father of Europe” Charlemagne at the end of the 8th Century, who quite literally appropriated the Ravennan heritage by carting away a number of fancy marble columns for use in his own octagonal vanity chapel in Aachen. Herrin sees the history of Ravenna as the golden thread that connects the ordered, rational government of Roman imperial rule with the emerging Western European states: “the foundations of western Christendom were laid in Ravenna, whose rulers, exarchs and bishops, scholars, doctors, lawyers, mosaicists and traders, Roman and Goth, later Greek and Lombard, forged the first European city.”

Herrin is a master communicator. The breadth of subject matter covered is huge: not only does it span a wide geographical area but it seamlessly weaves together political, religious, social, and artistic spheres. But the density of information is lightened by her deft prose, and a disciplined structure. I really enjoyed the reading experience, even obscure debates on religious doctrine became interesting and relevant.

A special mention also needs to be made of the images in the book. Even in the paperback edition, we are given 62 colour photographs of the key buildings, interiors and artefacts, that showcase the visually stunning world of early Christendom.

Importantly this book is not just about Ravenna – it is about the whole Mediterranean world and beyond that is linked to the town, and the influence of events thousands of miles away. The Byzantine empire is obviously a critical part of this.

For example there is a great description of how the Byzantine emperor Herakleios finally destroyed Persia, the old enemy of Rome, triumphantly restoring the True Cross to Jerusalem in 630, crying out (via the dispatches) “Let all the earth raise a cry to God; and serve the Lord in gladness”. Centuries of warfare had at last resulted in total victory for the Byzantines. Then out of nowhere and in the blink of eye virtually all of the Eastern Byzantine empire was lost forever to the Arab people, followers of the brand new faith of Islam.

Herrin uses the history of Ravenna to bring the whole Mediterranean world from 400 CE to 800 CE vividly to life.

The drawbacks are relatively minor. You will need to set aside a decent amount of time to read it. If you are planning a trip to Ravenna I wouldn’t try to read it on the plane on the way over. There is a lot of material to get through and to do the book justice you shouldn’t try to just skim through the bits on San Vitale.

I would also argue that Herrin’s contention that Ravenna is the “Crucible of Europe” (the subtitle of the book) is a little forced. In a way she undermines her own argument by presenting such a wonderful tapestry of the “post Roman” Mediterranean world. Everything is so beautifully interwoven it seems contradictory to pick out a single place as a European foundation point – even if Theodoric was a model EU citizen and all-round great guy.

Overall then this book represents an absorbing and compelling reorientation of the typical narrative of the post Roman world. It celebrates the achievement of a town that was self-consciously building a new Christian world, as part of a glorious pan-Mediterranean mission.

Personally I am also happy that I now have a much better understanding of how our Justinian logo made its path through history to bring a touch of imperial splendour to this website.

A Curious History of Sex - review →