A Curious History of Sex 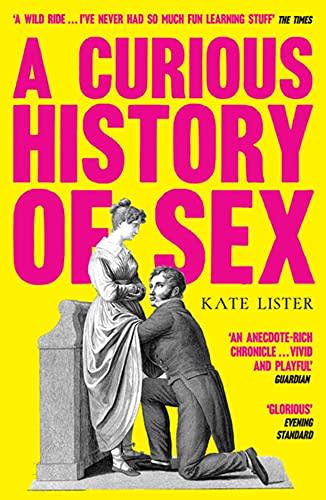 A Curious History of Sex is a great success in bringing ideas of sex from different times and places into the light – helping us to better understand our own attitudes and behaviour.

There’s fun to be had along the way too as we are encouraged to chuckle and wince at all the crazy sexual habits of our great grandparents – I’ll never look at cornflake in quite the same way again.

Explicit prose warning! (although only when necessary.)

Sex, as we all know, has been around for about two billion years or so. But we humans continue to struggle with what sex is supposed to be all about. As Kate Lister notes in the introduction to “A Curious History of Sex”: “Humans are the only creatures that stigmatise, punish and create shame around their sexual desires. While all animals have courtship rituals, no wildebeest has ever gone into therapy because it’s struggling to express a latex fetish.”

Interestingly while the idea of what is right and wrong sexual behaviour has changed a lot over time, individuals are often adamant that that they are upholding an absolute moral standard. We are introduced to one such individual in the book: John Harvey Kellogg, of breakfast cereal fame. A doctor in the late 19th century United States he was convinced that people were thinking about sex in the wrong way, too much, and often on their own – it wasn’t doing them any good at all. To help people control their urges he invented a brand new food. He wanted something so bland and boring it would cure you of any excitable thoughts. The exact opposite of a really good meal (“A man that lives on pork, fine-flour bread, rich pies and cakes, and condiments, drinks tea and coffee and uses tobacco, might as well try to fly as to be chaste in thought”). The food he came up with: Kellogg’s cornflakes.

Kellogg’s commitment to the betterment of humankind didn’t stop there: he published a weighty sex advice tome called “Plain Facts for Old and Young” which you can still read today here. It is mainly concerned with the dangers of “the solitary vice” and sets out 34 helpful warning signs of a potential onanist 1.

He also gave yogurt enemas to patients in his sanitarium to help them concentrate, promoted male circumcision without anaesthetic to help reduce the sensitivity of the vital organs (allegedly circumcising himself at the age of 37), and recommended female circumcision to cure nymphomania.

In short when it came to sex he was a bit of a nutcase.

How far have we come?

Lister encourages us to chuckle and wince at all the crazy things our great grandparents believed in, but her serious point is to make us look a bit harder at our own beliefs and behaviours. While we may not stick yoghurt up our bottoms much these days, we have our own habits and hang-ups and that our own great grandchildren might find equally silly / horrifying.

The structure of the book

Rather than telling the “story” of sex, Lister focusses each of her 24 chapters on some sexual “thing”. For example it could sex and food (as per above), or pubic hair, or sex and bicycles. Each chapter then reads like a well researched blog post – deftly covering the subject matter by digging up and stitching together a wide variety of historical references, accompanied by lots of arresting images.

The effect is a bit like a literary curiosity cabinet. When writing about periods for example (as in menstruation, not historical periods) Lister starts with the Romans, then zooms forward to modern Nepal, Ethiopia and India, then back to medieval Europe, then over to Ming China, a brief reflection on the Bible and the Quran, then the ancient Greeks with Galen before describing the modern encouragement of period shame by companies keen to flog more sanitary products.

I was expecting a bit more of a narrative history about how our views on sex have changed over time but it is not really that kind of book – instead it is one you can pick up and read chapters at random. They are not too long either – I could get through each per train journey into work. Although some of the images shown in the book might surprise your fellow travellers – even though the full page explicit Victorian pornography was incidental to my purpose in reading the book, I felt that as a middle aged male commuter I didn’t really want to get into that conversation with the stranger next to me…

Lister is an entertaining writer who has a breezy conversational style, with an infectious enthusiasm for her subject matter. To give you a flavour here is her description of severe period pain from the aforementioned chapter:

“You feel like you have a cold – shivering, aching, nauseous – and have the hair-trigger emotions of someone who has not slept for days… The intense cramping across your lower abdomen feels like the worst diarrhoea you’ve ever had – in fact, you’ll also get diarrhoea, to help with the crying fits. As your internal organs contract and tear themselves to blooded bits so you can lay an egg, blasts of searing pain rip through you. Sometimes they’re so bad, you double over and can’t breathe until it’s passed, and the dull, constant ache returns… You bleed so much that all ‘intimate feminine hygiene products’ fail you – it’s like trying to control a lava flow with an oven mitt. You worry people can smell your period. You are terrified to sit on anything or stand up for a week in case you’ve bled through. And as you’re sitting, a crying, sweaty, wobbly, spotty, smelly mess, some bastard asks ‘Time of the month, love?’ And then you have to eat his head.”

Are there any downsides to be aware of? Lister’s scattergun approach to history may not appeal to everyone – while her scholarship is impressive it can feel at times that we get every single keyword reference from an extensive trawl of the archives plus the top 30 results from google. I found I enjoyed the book more if I didn’t try to read too much in one go otherwise it could feel a bit relentless.

It is also often difficult to judge if the anecdotes she has selected represented “normal views” in the past or not. Was J H Kellogg considered a crackpot when he advised on using carbolic acid on the clitoris as a cure for a high sex drive? Hopefully (surely?) he was but we don’t really get into this, instead it is presented as just another bonkers sound-bite from history with little comment on how it was received. Maybe this is an inherent difficulty of writing sex history – finding out what most people thought is often tricky – but I would have liked a bit more context every now and then.

However the book is a clear success in its primary aim which is to bring into the light sex from different times and places, so we can understand our own attitudes and behaviour. As Lister concludes:

A statement to reflect on while munching through my breakfast cereal2.

What is the benefit of reading history books? →