Trauma or nostalgia? What does history mean in the USA 🇺🇸 and the UK 🇬🇧?

I have lived all my life in the UK and have a certain idea about what history is. But history can mean different things to different people. How is my UK perspective on the subject different from a United Statesian’s for example? What is the best way to study this difference? And why should we care? 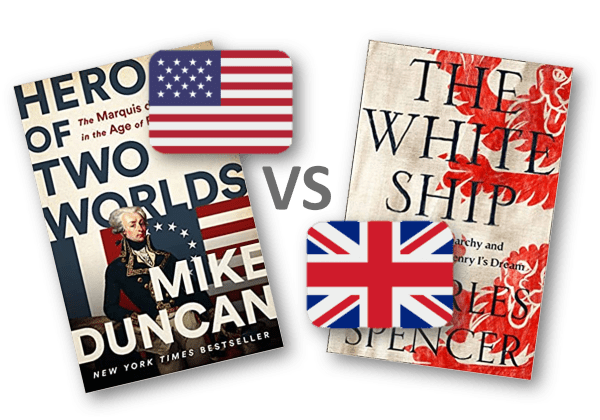 In this post I will be exploring some of the – for me – surprising answers to these questions.

England and America are two countries separated by the same language

One way to compare attitudes to history in the UK and US is to look at the history bestseller lists here and there. If it is not just the same list twice (which it isn’t) what are the similarities and what are the differences?

And the “why” is that the history books we choose to read tell us a lot about our preoccupations in the present. We will gain an insight into British and North American society now, by examining what interests us most from the past.

So what are the history bestsellers2 in the UK and the US?

The top 12 history books in the US right now:

The top 12 bestselling history books in the UK:

The first and most obvious thing to say is that the lists are not the same. There is only one book that repeats across the two lists which is Sapians: A Brief History Of Humankind by Noah Harari. All of the books on this list are available for sale in both countries but clearly there is a different set of authors and a different set of history books in each market, with a focus on what happens close to home.

The second is that there are some common themes: both lists feature stories about World War Two: Lily’s Promise: How I Survived Auschwitz and Found the Strength to Live, Agent Sonya: Moscow’s Most Daring Wartime Spy in the UK and The Bomber Mafia: A Dream, A Temptation, And The Longest Night of the Second World War in the US. This is an event that looms large in the consciousness of people from both countries. If I had included all military history books within my sample we would see an even clearer bias towards the second world war.

In the UK history ends with World War 2…

This similarity highlights an interesting difference in the two lists. In the British list there is only one history book set after world war two. Many national histories of the UK chose to end at this point. It is almost as if victory in this war marked the perfect culmination of the national British story and to say any more would just spoil the ending.

…In the US history is still happening

The US list however contains plenty of books on contemporary history, in fact 3 out of 12 of them are based after 1945 and others will have later sections too. Perhaps this reflects a sense in the United States that history is still being made, and momentous events are still in train? Whereas in the UK history is something we did a while ago but have since given up on.

History is authority in the US, in the UK it is for pleasure

What else can we determine?

It strikes me that the US list shows a more serious and authoritative set of books. We have two or perhaps three books giving us “a history of the United States” – here, they seem to declare, is what you need to know. Cosmetically too the US books as a group seem to have more sober less colourful covers. In the UK’s list there is no “History of Britain” style book and one book is so keen to show it is not serious that it depicts a hand-drawn scrawl of a penis full-size on the front cover: 52 Times Britain Was a Bellend but James Felton. History in the UK as represented by these books seems a more fun – and also frivolous – activity.

The overriding thing that strikes me though as I compare these lists is that in the UK history is nostalgia, in the US it is trauma.

Nostalgia in the UK

In the UK the books are romantic tales from the past: Vikings, 1950s childhoods, food we ate, a man who made crockery. While I haven’t read them I suspect they represent a nice little holiday from the present: there is little soul searching going on.

Trauma in the US

The US list deals with anguished national subjects such as slavery, racial segregation and drug abuse – all hugely traumatic areas that society has not come to terms with. The range of the books also hints at the current cultural division: Give Me Liberty! and A People’s History of the United States contend with Lies My Teacher Told Me: Everything Your American History Textbook Got Wrong and the troubling Red, White, And Black: Rescuing American History From Revisions and Race Hustlers.

Rather than a holiday from the present, the past in the US seems to be visited as a business trip where allies are sought for present day struggles.

Neither the choice of historical subjects nor the polarised views on the past that can be represented make for cheerful reading. It is going too far to say that society in the UK is unified and doesn’t also struggle with racism, racial segregation and drug abuse. But the marked difference in these lists imply that these issues are much more acute in the US – I was surprised to see how stark these differences are.

The dangers of over-interpretation

I have to be a bit careful about over-interpreting my data set: it is based on 24 books and I might have drawn different conclusions if I had chosen 20 or 30 instead, or done it at a different point in time. I’m also contending with the Amazon algorithm to identify best-sellers (see notes below). The difference in book lists might also reveal differences in book buyers rather than populations – we will get a skewed picture if the history reading public in the UK comes from a small isolated section of society for example. On top of that each reader will have their own individual motivations and viewpoints.

Finally my own mental baggage will have a bearing. While I have tried to let the books speak for themselves I’m sure my perception of the UK and the US in general has coloured what I have chosen what to highlight. And also my existing ideas about what is and isn’t important. For example: why haven’t I focussed on the representation of women (or not) in history? (Two female leads in the UK, none in the US.) Is it because I am man? Possibly.

My view is that we have to be alive to problems of interpretation, and by considering them we can usefully challenge ourselves. But interpretation is still a productive activity – and can be improved with further investigation and feedback: comments below welcome!

But to end on an optimistic note: a shared language can help us understand each other better, both between societies and also within our societies, if we keep listening – and keep reading.

Do you agree with my observations? Let me know your own thoughts in the comments.