How We Misinterpret History and Why it Matters 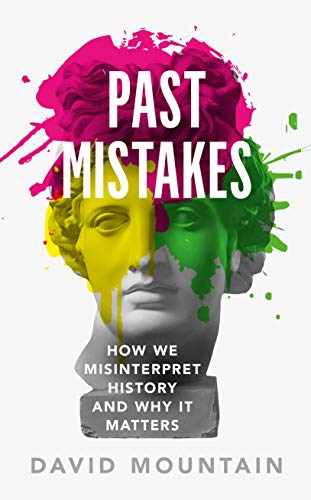 Past Mistakes will open up new perspectives: in a refreshing and accessible way, despite the seriousness of the subject matter. And even where the book treads familiar ground, Mountain’s engaging style and talent for synthesis makes the revision worthwhile.

So unless you are already an expert in all the topics covered you will find plenty to enjoy.

Close your eyes and conjure up an image of Christopher Columbus… Did you do it? What did you see?

If you are anything like me you will envisage a cheerful little fellow wearing a captains hat, pantaloons and buckled shoes, perhaps stepping onto the sandy beach of a newly discovered American island with some picturesque palm trees framing the scene.

Now contrast this with the picture painted by David Mountain in “Past Mistake: How We Misinterpret History and Why it Matters“

In the first two years of the establishment of slavery on Hispaniola [the ‘New World’ discovered by Columbus], an estimated 50,000 natives died from disease, starvation and overwork. Tens of thousands more chose to take their own lives rather than endure the hellish system of enslavement established by Columbus. In 1492 Hispaniola was home to anywhere between 300,000 and 1 million indigenous people. By 1548 that number had dropped to about 500. An entire people were lost within a single lifetime. David Mountain, Past Mistakes

Clearly the common “western” mental image of Christopher Columbus / Cristobal Colon / Cristoforo Colombo is far removed from the reality of a rapacious adventurer who, along with his gangsterish brothers, was quite happy to tyrannise, abuse and kill to achieve power, wealth and fame. This applies equally to his relations with the Spanish colonists under his rule as it does to the Tainos, who were living on the island of Hispaniola when he arrived.

This is not a modern revelation. Mountain tells us that Columbus the psychopathic tyrant is a well documented phenomenon and has been written about in English since the end of the 19th Century. But the mental image of happy-go-lucky adventurer who boldly went into the ocean blue where no-one had gone before is the one that sticks.

Partly this is because the “bold Columbus” narrative slots nicely into the traditional national histories that have helped formed the identities of both European and American states – or at least groups within them. Contradicting that narrative can then be seen as an attack on identity and therefore rejected by the cultural immune system. But whether or not it is comfortable to acknowledge doesn’t change whether or not it is true.

As Mountain puts it:

it’s impossible to deny the role of history in shaping our perceptions of society, both past and present…. History, whether we like it or not, has an annoying habit of being relevant.

“Past Mistakes” can be read as an attempt to identify and debunk some of the most persistent and pernicious historical myths that we still lug around with us as mental baggage today. Mountain is doing his bit to overturn our comfortable view of the past to reveal the complexity that lies underneath. He wants us to replace Columbus the cartoon with Columbus the killer. In doing so we achieve a better understand of what has created our present.

His nine shibboleths are:

You can see immediately that his targets are pretty varied – and each chapter can be read as a standalone essay. I jumped around to read the ones that took my fancy first and this didn’t interfere with the flow of the book.

Some of his targets are fairly well battered already. I’m not sure that many people now would agree with John Milton who (writing in the 17th century) depicted the Dark Ages as a time of “blind illiteracy” populated with “utterly stupid monks”. In fact I scarcely even hear the term Dark Ages these days, instead the reference is to the Middle Ages.

However even where Mountain has chosen a soft target, he explores the subject in an engaging way, giving us some of the historiography – how was it that it became called the dark ages in the first place? – before opening out the historical perspective and applying the coffin nails. For example we hear of the brilliant Byzantines and the intellectually enlightened Islamic world.

Of course while picking on medieval monks for their “ignorance, stupidity and superstition” (David Hume) might seem old fashioned to me it might be less so for others – so different chapters will appeal to different people.

I tended to enjoy most the subjects I knew least about: for example reading that Pythagoras, the supposed father of right angles triangles, was actually a mystic cult leader who only bothered with maths when it helped with his numerology.

Conversely where I had already read quite a lot about the subject – such as hunter gatherers and the origin of farming – I sometimes found Mountains enthusiastic debunking a bit annoying. And at times his over-exuberance in setting the record straight can seem to echo in style the archaeological conspiracy theorists he dislikes so much.

For example Mountain reporting back from the famous hunter-gatherer-crop-grower archaeological site Gobekli Tepe quotes “all our theories were wrong” while we read in the bestselling but bonkers Magicians of the Gods on the same site that “everything we have been taught about the origins of civilisation could be wrong” (Graham Hancock).

Of course Hancock then goes on to talk about Atlantis and aliens while the Mountain instead grounds us in warnings against excessive agriculturalophilism (my word). But there is a reason for this (occasional) similarity in style, which is that Mountain – like Hancock – is not primarily interested in a balanced assessment. Mountain is interested in presenting the “other side” of the argument and can therefore sometimes be guilty of overstating his case.

Mountain writes well with a clear refreshing style. Each of his chapters crams in a lot of content but keeps it pretty punchy – I found I could get through a chapter per tube journey to work. This means it is an easy book to pick up and get stuck into, or indeed to recommend.

In fact I would only not recommend Past Mistakes if you are already well versed in all of Mountain’s chosen topics. If this is you: well done! but you probably won’t get a lot out of this book.

I suspect most of us will find plenty to enjoy.

Past Mistakes will open some new perspectives: in a light, refreshing and accessible way, despite the seriousness of the subject matter. Even where the topics are reasonably familiar, Mountain’s engaging style and talent for synthesis makes the revision worthwhile.

Trauma or nostalgia? What does history mean in the USA 🇺🇸 and the UK 🇬🇧? →