A History of Civilization in Twelve Clocks 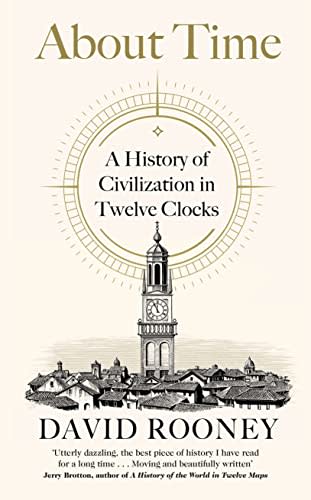 About Time will give you a new perspective on otherwise familiar landmarks – it can help you see the everyday in new and insightful ways.

A well written and pleasantly proportioned book, it is highly recommended and will appeal to all sorts of people.

Clocks are about more than just telling the time.

At one level this is a statement of the obvious: we all know that the watch you wear is not chosen purely for its practicality as a time-keeping device, because otherwise everyone would wear the classic Casio F-91W as I do. (Although even this is a statement to say that I am deliberately eschewing the ridiculously anachronistic wrist-watch fetishization that others fall prey to.)

But at another level this is easy to forget – and David Rooney’s book “About Time” is an excellent reminder to keep your eyes open and mind open when you come across a clock or timekeeping device.

This was brought home to me as I was cycling past Stockwell Tube Station in London on my way to work, where there is a small rectangular stone tower with a clock at the top. I have cycled past this clock hundreds of times but have never previously given it a second glance. Seeing it again after reading Rooney’s tome – with a fortuitous red light buying me some extra time – made me look more closely.

On the side of the tower facing me as I waited in the cycle lane was the inscription: “These were our sons who died for our lands” with a long list of names chiselled into the stone underneath. I realised that the clock was the focal point of a large stone war memorial for local Stockwell men who had died in the First World War.

Seen in this light, the choice of a clock was a poignant reminder of the life-time that we have, that was denied to these men who died young and violently.

The fact that the clock told the time became incidental to the purpose of the memorial. But the clock is nevertheless central: intrinsically and symbolically linked to the memorialisation of the dead.

Reading Rooney’s book gave me a new perspective on an otherwise familiar landmark – it can help you see the everyday in new and insightful ways. 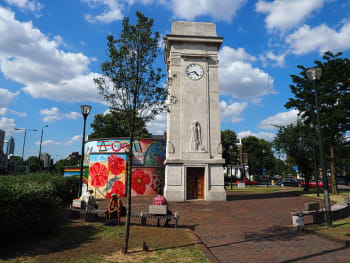 “About Time” takes us on a roughly chronological journey, highlighting the different ways that clocks have been used by different people throughout history. Each of the 12 chapters is titled by a theme, representing a real or symbolic use for clocks beyond time telling.

For example we start with the theme of “Order” and the installation of the first sundial in Rome in 263 BCE, looted from a Sicilian Greek city. While this was a celebration of Rome’s successes in war, it was also, Rooney tells us, the moment “Romans were forced to live their lives by the clock”. A playwright (maybe Plautus) complains that the day has been “smashed into bits” and that his complaining hungry stomach has to wait to eat until “the sun says so”. While we might gripe about the tyranny of time nowadays, according to Rooney this tyrant was established at the moment that public clocks were first installed.

The other chapters deal with Faith, Virtue, Markets etc… up to War and Peace and atomic time keepers.

Dipping in and out

Each chapter can be read as a standalone essay and I suspect every reader will have their own favourites. I particularly enjoyed the chapters on Markets, Empires and War – which is perhaps a subconscious reflection of my supressed megalomania but also because these are the chapters that seemed most relevant to me now.

To take the chapter on Markets: Rooney describes the role of clocks as financial regulators from Antwerp in the early 17th Century through to Canary Wharf in London in the early 21st Century. The role of a clock in a market is pretty simple: to make sure that people don’t trade when they are not supposed to. But you need to define “when” very carefully to make sure that no-one cheats the system. So if you defined “when” in seconds, someone could trade 0.1 seconds before they were supposed to, and you would never know because you would round the time for all trades to the nearest second. The level of clock accuracy now required is 1 millionth of a second. This means that you can’t tell the regulator that you bought a load of shares in Facebook at 1 second past 12:30 on Tuesday, you have to tell them that you bought a load of shares at 12:30 and 1.000001 seconds (on Tuesday).

As a child I used to compete with my brother on how fast we could press start and stop on our Casio F-91W stopwatches. The record was 0.06 seconds which we were pretty happy about (anyone trying the same may find it helpful to use a table top or other hard surface to get the quickest double press). But for current financial regulatory purposes we would need to be 60,000 times faster.

Rooney describes some of the infrastructure needed to make this happen in London’s financial companies – the precious atomic clocks in North-West London; the dedicated fibre-optic cables transmitting the time signals that run underneath London’s streets; and the intimidating high security prison like buildings stuffed full of computer servers that receive the time signals, process them, and spit them out to the masters of the universe in their shiny glass office blocks at Canary Wharf – or at least to their algorithmic virtual drones who do their bidding at ludicrously fast speeds.

A London focus with a global scope

Although the book is global in scope, London provides the setting for many of the stories. As a London resident myself I enjoyed this aspect – I now know what those intimidating high security prison like buildings near to Canary Wharf are for example – but there are plenty of anecdotes from other places to make it accessible to all.

In fact this, combined with the pleasant and unadorned prose style – a bit like George Orwell writing for the New Scientist – makes it an ideal gift for pretty much anyone. Jot down a clock or time related joke on the inside cover to make it look like you put some thought into it, wrap it up, and you are done until next year. Whoever it is you give it to is sure to find something in there that they enjoy.

My negative for this book is that sometimes I feel the author stretches his claims a bit far. I can’t blame him: he is trying to tell some good stories and if you insert too many caveats the story is lost. If you want to write a blockbuster Christmas history book you can’t stuff it with footnotes.

But sometimes I felt my credulity stretching. Returning to the Roman sundial: we are told that Romans were forced to live their lives by the clock from BCE 263 when the sundial was installed. But the only thing we have to back up this claim is a couple of quotes: one uncertainly attributed to Plautus (mentioned above) and the other from Alkiphron whose wikipedia entry notes “Regarding his life or the age in which he lived we possess no direct information whatsoever.” So did the new sundial change life for Romans? I doubt it… but it is a good story.

A techno-cultural history not a social history

Picking holes in one anecdote in the book is a bit pedantic of me, but it does illustrate that this book works best as a history of techno-cultural reflections, and is less convincing as a social history. It will tell you what some people thought, not what everyone thought.

This book is an easy one for me to recommend – it will appeal to a wide range of people in line with the broad scope of the book. It is written in an engaging style and will give you plenty of anecdotes to relate to your friends if time starts to drag. And it will help you to see afresh the many time-keeping devices that are all around us, perhaps even the humble Casio F-91W.

← Trauma or nostalgia? What does history mean in the USA 🇺🇸 and the UK 🇬🇧?