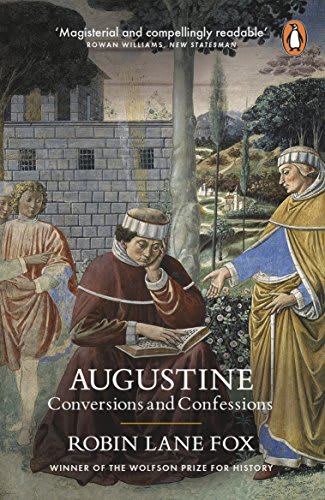 An analysis of how one of the greatest thinkers in Christian theology thought about himself and his relationship to God; Augustine’s ideas spanned and merged philosophy and theology, and this history book will be of particular interest to anyone interested in these subjects.

A highly talented historian, Robin Lane Fox engages meaningfully but objectively with this person whose ideas and worldview is so alien to our own: tolle, lege!

The tagline for this book could be ‘a biography of an autobiography’ – it conveys a sense of what Robin Lane Fox manages to achieve in his award winning book, an analysis of how one of the greatest thinkers in Christian theology thought about himself and his relationship to God.

Winner of the Wolfson History Prize in 2016, Robin Lane Fox’s work is a biography of a book, Saint Augustine’s ‘Confessions’, which the Saint started (and, in the Lane Fox’s view, completed) when he was 42 years old in 397 AD, shortly after becoming sole Bishop of Hippo in what was then Roman North Africa. The Confessions were themselves, in part, an autobiography by Augustine of parts of his life up to that time.

The focus of Robin Lane Fox’s book is on the development of Augustine’s intellectual and religious ideas in this period, covering his early classical education, ten years spent as a Manichaean, a career as a rhetorician, his interests in the philosophical schools of Scepticism and Neoplatonism, and his famous ‘conversion’ in 386 (at the age of 31) under a fig tree upon hearing a child’s voice call ‘tolle, lege’ (take up and read). Augustine’s thinking spanned and merged philosophy and theology, and this book will be of particular interest to anyone interested in these subjects.

Robin Lane Fox’s analysis of those ideas is meticulous, in many cases examining the use of particular words and phraseology and tracking their origins. The author is excellent at providing the necessary context where it is useful to his narrative, but the focus is on what was going on inside Augustine’s head. Just as Augustine’s Confessions come across as a highly introspective work, so Robin Lane Fox’s book is a story of Augustine’s ideas and beliefs and how these developed.

Robin Lane Fox shows how these ideas and beliefs came together to form the Confessions. Although Augustine was to live for another 33 years following its completion (in Lane Fox’s timeline), and was to compose many more famous works (including The City of God) the impression given by Robin Lane Fox is of the Confessions as a culmination of a period of intellectual development. In fact, this feeds into (or is fed by) Lane Fox’s own views on how the Confessions were composed.

Portrait of Augustus as a Young Man

Contrary to what Lane Fox’s claims is the prevailing academic consensus, he argues that the Confessions were composed as an almost continuous spontaneous prayer in a single burst of intense literary output in Lent 397. In the author’s view, the facts point to the Confessions being dictated to a secretary (writing in short hand) as a unified whole, probably whilst Saint Augustine was kneeling in prayer (which would have also been the most comfortable position for him at the time due to piles and anal fissures), climaxing in a mystical outburst of religiosity in the Confession’s ‘perplexing’ final three chapters, meditating on the meaning of Genesis as Easter Day, 397 approached. The impression given is almost cinematic.

Many years ago, at university, an evangelical Christian explained to me that humanity was on a boat (metaphorically speaking) which was heading towards a precipice (damnation) but that God’s giant hand reached down and plucked a lucky few (the pre-destined ‘elect’) to save them from this watery fate. This idea is essentially Augustinian and demonstrates the profound influence Augustine has had on Christian ideas for the last 1,600 years. He was the dominant theological influence on medieval Catholicism, but his ideas also formed the basis for much of the theology of the Protestant Reformation.

Robin Lane Fox admits at the start of the book that he is a non-believer. Notwithstanding this, he is clearly sympathetic to his subject matter and engages in Augustine’s worldview and ideas, although at times he is able to step back and include wry observations on how Augustine’s life and ideas might be viewed today. This mixture of engagement and objectivity is a great strength of the book.

Throughout the book, the author contrasts and compares Augustine’s life with those of two other nearish contemporaries: Libanius, a pagan Greek teacher of Rhetoric; and Synesius, a fellow Christian bishop (portrayed in the 2009 film Agora). In Robin Lane Fox’s own words, the intention is to compose something akin to ‘triptych on a medieval Christian alter’. In fact, Robin Lane Fox is excellent at drawing interesting comparisons with other historical and fictional characters throughout his book, ranging from Tolstoy (who composed his own Confessions late in life) to Paul Morel in D. H. Lawrence’s Sons and Lovers. The two other contemporary Great Doctors of the Western Church, Saint Ambrose and Saint Jerome, also make frequent appearances, with their lives overlapping and influencing Augustine’s own.

If someone were to ask me ten years from now what I remember most about this book, sad to say I would probably respond with the Manichaeans…

Augustine spent ten years as a Manichaean, and then devoted the rest of his life to violently denouncing them. The Manichaeans were a religion that most people today would not have heard of (except as a word denoting a black and write point of view, as in a ‘Manichean worldview’ etc.). It originated in Persia with a prophet called Mani, and its dualist belief in light and darkness shares some similarities with Zoroastrianism, another Persian religion. However, Manichaeans also believed that plant life derived from the ejaculated sperm of demonic male members of the Zodiac; animals came from the aborted foetuses of demonic female members of the Zodiac.

These beliefs were meant to be taken literally. Male members of the ‘Elect’ reputedly engaged in a ceremony involving ejaculating on flour spread on the floor, mixing them and then making a loaf of bread which they ate. Augustine never belonged to the Elect so could not vouch for the veracity of this story himself, although he took it seriously enough later in life to use it in his arguments with Manichaeans. Unfortunately for him, he was apparently accused of doing it himself by a fellow Christian bishop. Robin Lane Fox speculates that the rumour reached the recipient of this ‘seeded’ loaf, who thereafter broke off contact with Augustine for some time.

Cry me a river

Something else which struck me about this book was the amount of crying that went on. Late forth century / early fifth century Christians apparently spent quite a lot of time crying. They cried ‘rivers’ of tears; they cried ‘floods’ of tears; the ground was often ‘soaked’ with their tears. Crying could be continuous over years. They cried whilst hearing a sermon, or giving one. They cried whilst reading Scripture. If they were lucky, they cried whilst praying: Augustine’s mother Saint Monica was particularly adept at this, which Augustine believed increased the power of her prayers. Augustine cried a lot after giving up sex. Being a Christian at this time seems to have been emotionally exhausting.

This is probably the history book I have read which has done most to convey not only a time when people lived in material conditions very different from our own, but thought about the world in an entirely different way. This is partly a product of the book’s focus, which is ideas and beliefs, rather than events or material conditions.

It is also because this book is about a period of history in which religious figures stepped to the forefront. Those religious figures were preoccupied by matters of the spirit and inner contemplation, and their experience of religion was characterised by intense emotionality.

This unfamiliarity is both a source of the book’s fascination, and also a challenge. How do you relate to (or take seriously the ideas of) people who appear preoccupied by matters which do not preoccupy your own thoughts? Or whose thoughts were predicated on concepts whose existence they took for granted but which much of the world no longer does (God; the spirit; the soul)? It is a bit like the apocryphal story of the Scholastic debating how many angels can dance on the head of a pin. At times, the discussions of Augustine’s ideas can come across as arcane and rambling. The word ‘love’ is used a lot, and after a while I got a little tired of discussions about ‘ascending’ to God, ‘turning’ towards God, with ‘love’, through ‘love’ etc. etc. – eventually the words and phrases began to swirl around my head in a slightly psychedelic fashion.

Robin Lane Fox does what a good historian should; he engages meaningfully but objectively with a person whose ideas and worldview is so alien to our own. Looking back across 1,600 years it can be difficult to get into the head of people for whom inward looking spiritualism gave life meaning; if they were looking at us, they may well be shocked by the shallow materialism of our thoughts. Robin Lane Fox bridges that gap in understanding in a way that only a talented historian can do.