The Forgotten City of Ancient Greece 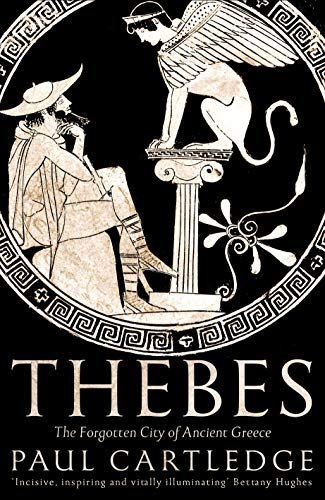 A highly enjoyable read: I was illuminated (although not vitally), thought provoked and engaged.

So I liked the book… but it didn’t make me like the Thebans. Even so I am happy that I understand them and their world a little better.

In 371 BCE the Thebans achieved one of the most shocking victories in the history of warfare, by trouncing the previously invincible Spartans at the battle of Luectra despite being outnumbered almost two to one.

To put this into context for sports fans: the Thebans winning this contest was as unexpected and incredible as the hitherto abject Leicester City winning the English premier league in 2016: a result that so stunned one veteran pundit that he removed his trousers on live television (I’m not making this up: link). It was shocking, disorientating and to many deeply distressing. The Theban victory was at first sight a similarly freakish event.

The secret of success

So how did the Thebans do it? They had spent the previous few years enhancing their military capability, for example in 378 BC with the formation of an elite group of 300 homosexually paired Theban soldiers called the Sacred Band. Perhaps, Cartledge tells us, this was modelled after the Spartan kings’ 300 strong long-haired (bisexual) royal bodyguard known as the Hippeis. More important although less intriguing / titillating to our modern sensibilities was the fact that they also had a highly effective leader called Epaminondas who used some nifty tactics at the battle itself (and made some clever strategic decisions in the aftermath).

Surely there was some luck involved as well? We are told that the Thebans arranged their best troops to face the Spartan elite soldiers – and that Sparta lost 400 citizen soldiers to Theban losses of under 50 – a complete reversal of the normal course of a battle for the Spartans.

Finally there is the slow weakening of the Spartan hegemony itself to consider. It was running out of decent soldiers and willing allies: the Spartan state by the BCE 370s was in a particularly brittle condition.

Whatever the causes the Theban victory over the Spartans was so complete that it marked the end of Spartan pre-eminence in Greek politics forever.

When I learned of the Spartan’s defeat as a young adult 2,371 years later I still felt a sense of loss and humiliation that this non-entity Greek power had brought low such immortal warriors (I was into camping at that time so had a sense of affinity to the Spartans given their own emphasis on physical endurance and masochistic suffering.) How undignified to lose to the Thebans who up to that point I hadn’t even heard of!

Paul Cartledge’s book “Thebes: The Forgotten City of Ancient Greece” has a mission-statement of rescuing ancient Thebes from obscurity – and helping us understand how this relatively unknown Greek city (compared to the celebrated Athens and Sparta) managed to rise – briefly – to dominate the ancient Greek world, before being utterly destroyed in turn (spoiler alert).

What does it cover?

He succeeds in his aim. This is a fluent and highly readable account that takes us from pre-historic Thebes through to the archaic then classical period getting more detailed as the sources allow. He also gives us good breadth for a relatively short book (274 pages) covering archaeology, myth (Oedipus and co.), Theban religion and culture, before focussing in on the political and military manoeuvrings that form the majority of this book, describing the aforementioned rise and fall.

He rounds off with a chapter on the integration of Thebes into today’s world – plays, operas, books and Sigmund Freud.

He knows his stuff

A key strength is Cartledge’s clearly intimate relationship with the source material: primary and secondary. Having been a Cambridge professor of classics since 1979 (before I was even born) means that he has accumulated a huge store of knowledge. I suspect that he has accumulated a wealth of experience in how to communicate that knowledge too, having presumably given innumerable tutorials to wet-behind-the-ears undergraduates.

The style is scholarly but chatty, even rambling at times – but in a reassuring avuncular fashion. I could almost imagine Cartledge lying down on a sofa with his shoes still on and dictating the entirety of this book in one go, without hesitation, repetition and only a modest amount of deviation.

My one criticism of the book is that it fails the “cricket test”.

I never at any point wanted the Thebans to win.

Usually when reading a book on an ancient people you develop an sense of empathy – you celebrate their successes and lament their failures. This can happen even with history’s most violent sociopaths: that murderous youngster Alexander the Great for example. But in this case I could never overcome my feelings of slight distaste for Thebes and the ancient Thebans.

There are reasons for this which are outside Cartledge’s control of course. It is not his fault that:

But even so I was hoping to finish the book at bit more pro Theban, and a bit more emotionally involved in their hubris and nemesis.

Held back at the walls

On reflection the reason for this may be that the ancient Thebans are defined by their edges: where they rub up against the Athenians or the Spartans. The Athenians we recognise as thinkers, sailors and democrats; the Spartans as warriors, oppressors and oligarchs. The Thebans are… well… the other ones: not Athenians or Spartans. But we don’t get a sense of what it is to be a Theban. We are left staring at the city walls and we don’t get invited in. For me at least they lack a historical personality.

Such amateur philosophical musings aside however I really enjoyed this book. It was illuminating (although not vitally), thought provoking and engaging. And even if I still don’t really like the Thebans I am happy at least that I understand them and their world a little better.

In Defence of History - review →