In Defence of History 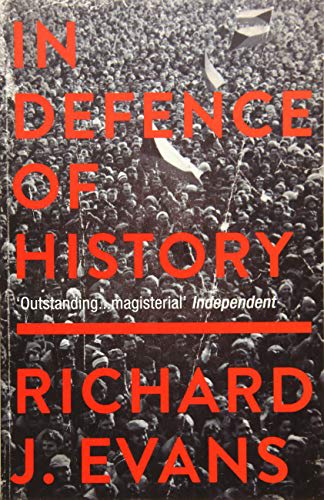 A classic of historiography, In Defence of History gives you an insight into the different ways a modern professional historian operates and what they are trying to achieve.

And if you come across an argumentative post-modernist at a party, telling you that you don’t know anything, this book will supply you with plenty of arguments to try to convince them otherwise!

I have never knowingly met a post-modernist. Perhaps I have been going to the wrong parties – back in the days when I went to parties. I am keen to meet one. If you are one or can introduce one get in touch.

The reason that I am so interested to make this acquaintance is that Richard J. Evans, author of the 1997 classic of historiography “In Defence of History” sees this tribe as the key protagonists in the cut and thrust of historiographical debate. The post-modernist assault on history seems to be what made Evans circle the faculty wagons, corral the college horses – and write this book.

The most extreme positions in post-modernist thought, we are told, deny the fundamental reality of the past, and argue that all that matters is the interpretation in the present – with every interpretation being equally valid. This is because there is no objective standard against which to assess the competing narratives.

You can see how this would make the study of history tricky to justify.

But would anyone really go so far as to make this claim? If you are a post-modernist please do drop me a line and let me know.

Not new but still current

Evans’ book while not new, is perhaps the next significant stepping-stone in the popular understanding of what the current study of history is all about, after E.H. Carr’s masterpiece What is History (also reviewed on this site).

But while Carr provides the bones of the story, the post-modernists provide the meat – they are the ones who Evans really wants to get his teeth into.

How has the study of history changed over time?

We are first taken on a tour of what the (European) study of history was thought to mean through time: it is no longer considered “scientific” by most – although Evans is quick to reassure us that it is just different and not worse. It is also not currently a moralizing profession – serious historians try to better understand the human past not to pass judgement upon the individuals. And the belief in the predictive power of history is not what it once was…

“while a chemist… knows in advance the result of mixing two elements… the historian has no such advance knowledge of anything, nor is trying to gain such knowledge central to the business historians are engaged in.”

Richard Evans, In Defence of History

This all represents something of a retreat for the historical profession, or perhaps a planned withdrawal, from the territory occupied by the more ambitious historians of the past.

Smelling blood the post-modernists now enter the scene, denying not only the scientific basis of historical knowledge but also the ability to say anything objective about the past at all. In it’s most extreme framing nothing can truly be rescued from the past because it is obscured firstly by a historical writer who makes subjective choices on what to write about, then by a historian reader who makes subjective choices about how to read what’s written.

Or in the re-quoted words of Jacques Derrida, history is “an inscription on the past pretending to be a likeness of it” (1968).

Learning from the enemy

The aim of The Defence of History is to provide a bulwark against this extreme relativity – the idea that no-one can know anything – while also guarding against the opposite sin of supposing perfect objectivity when approaching the past. Evans also tries to recognise the positive impact that post-modernist thought has had on the historical profession by providing new ways to think about the past and new subjects for study.

For example would we have The Cheese and the Worms: The Cosmos of a Sixteenth-Century Miller by Carlo Ginzburg, a micro-history of an eccentric 16th century miller living in north-east Italy during an Inquisition, average 4.5 stars on Amazon, were it not for the post-modernist influence? Maybe not.

But given this is a defence manual, most of the book is focussed on first outlining and then rebutting the outlandish statements about historical reality made by a cast of post-modernist scholars.

The dangers of extreme relativism

It is interesting to read it now in 2021 because Evans anticipates some of the uncomfortable consequences of a highly “relativist” position, which was originally conceived of as a way of undermining a conservative hold on the past and therefore the present social structure. But is now more often associated with (from a British perspective) highly conservative US citizens trying to erase uncomfortable historical truths in order to retain their sense of status in society. Or to put it another way: Trump lying through his teeth with impunity.

So it is still fresh today more than twenty years after it was first published.

For me it also succeeds in its argument that we can know about the past and we can find meaning in the past.

I think it falls short in two areas:

The post-modernist arguments advanced feel a bit too much like straw men. They don’t seem to stand a chance. But these people are presumably not idiots (are you? as I said earlier please get in touch!) so would they really agree with how Evans is framing their arguments? Or are we missing something interesting and important? This feeling is exacerbated by the writing style which is a bit like when you come back home from a confrontation at the roller disco and you play back in your head the conversation as it should have gone with all the clever things that you would have said and think about how satisfying it would have been to see the look on your opponent’s face as you comprehensively out-witted them. Here at times Evans seems to be spooling out a similar monologue. Which isn’t to say that it is not a valid monologue but it can feel a bit… polemical.

I was also a little disappointed in what the book was not: it is not a call to arms or a rousing inspiration to take up the pen and make the world anew. For example the concluding sentence is:

“I will look humbly at the past and say despite them all: it really happened, and we really can, if we are very scrupulous and careful and self-critical, find out how it happened and reach some tenable though always less than final conclusions about what it all meant.”

Richard Evans, In Defence of History

Is this a lack of ambition from Evans? Or a sensible scholarly statement in view of past historians’ intellectual over-reach? Either way the blue touch paper remains unlit.

What have you got to show for it?

Perhaps the main difficulty for the historian in rebutting relativism is that there is no clear positive statement that can be made about the successes of the profession. Whereas a scientist like Richard Dawkins might say “that’s all very well you saying scientific knowledge is a sham: but the aeroplane still got you from New York to London in 8 hours”. But a historian cannot easily say something similar…

However with those relatively minor gripes out of the way this is still a good read. It gives you an insight into the different ways a modern professional historian operates, what they are trying to achieve and why what they do – and what we read – has meaning. And if you do come across an argumentative post-modernist at a party telling you that you don’t know anything, you will have plenty of arguments to try to convince them otherwise!