The Cult of Personality in the Twentieth Century 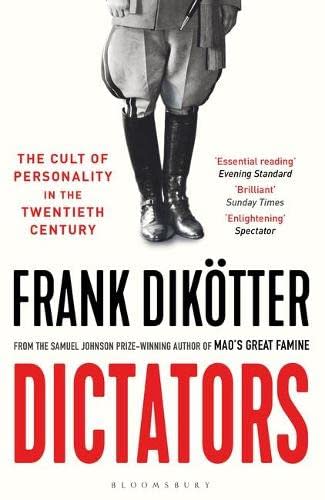 A highly readable potted history of eight twentieth century dictators, in whose dictatorships the cult of personality played a prominent part.

While it doesn’t say anything particularly new, it is praiseworthy for being both absorbing and accessible.

Frank Dikotter’s ‘Dictators: the Cult of Personality in the Twentieth Century’ is a highly readable potted history of eight twentieth century dictators, charting the rise and (more often than not) the fall of Mussolini, Hitler, Stalin, Mao, Kim Il-sung, Duvalier, Caucescu and Mengistu respectively, in whose dictatorships the cult of personality played a prominent part, albeit in different forms.

Fake it until you make it…

Dikotter states in the introduction that “The paradox of the modern dictator… is that he must create the illusion of popular support”, and that this is where the cult of personality comes in, being a tool in the dictator’s toolbox, a means by which a dictator can retain and strengthen his grip on power. As I turned to chapter 1 I was keen to understand why (as Dikotter suggests) the cult of personality is a more effective trick in the dictator’s playbook than any other, such as the use of the secret police, the carrying out of purges or the manipulation of the press. I also wanted to understand how it could be said that the cult of personality was effective, if ‘popular support’ for these dictators remained illusory. For the reasons set out below, I felt Dikotter never quite satisfactorily addressed these points.

Familiar names with some new faces

Each of Dikotter’s dictators are afforded a chapter each, running chronologically from Mussolini to Mengistu. I was pleased to be introduced to Duvalier of Haiti, and Mengistu of Ethiopia, about both of whom I knew very little prior to reading this book, taking their place alongside the more familiar Hitler, Stalin et al. Clearly covering the careers of eight dictators in one book means that detail will inevitably be lacking, and while I enjoyed cantering through the lives and times of some of recent history’s most vile personalities, I was sometimes left wishing there was a bit more detail as to how the cult of personality was able to develop and flourish. In respect of Mussolini for example, I would have liked Dikotter to flesh out how he came to be seen as a “demi God” or “prophet” in such a short space of time, particularly in light of the continuing existence of other powerful institutions in Italy such as the papacy and the monarchy. In respect of Duvalier, I would have liked to have better understood how his cult of personality came to be, in light of the fact that “There was no official ideology… no attempt to institute thought control… The radio occasionally broadcast his speeches, but until 1968 radios in the north of the country were too weak for reception. Newspapers carried his pronouncements, but were rarely seen in the impoverished countryside, where few could read”.

One cult or many?

In fact, this made me question what indeed Dikotter means by ‘cult of personality’ at all. Certainly there are common features to each of these dictatorships, such as the veneration of the leader, but there are notable differences too, for example regarding statues (Hitler didn’t allow statues of himself to be erected whereas statues of Stalin and Kim Il-sung abound in the USSR and North Korea) and ideology (Duvalier didn’t espouse one whereas others did). Most notable for me though, was the fact that despite the control exercised by these dictators, their peoples (according to Dikotter) did not believe the hype presented to them. In respect of Stalin, Dikotter notes “large swathes of the population apparently remained indifferent”. When Mao died, “liquor sold out overnight”, and in the countryside, “few people sobbed”. When North Koreans gathered to hear Kim Il-sung’s obituary, “They all cried, although no one could tell who was sincere and who was not”. Indeed “One five-year old spat in her hand to wet her face with saliva, making it look as if she was crying”. In Caucescu’s Romania, “ordinary people… seemed to lack enthusiasm”. Mengistu’s revolution “vanished the moment he fled”.

This led me to wonder how, if the majority of the population was merely acting and did not believe in the cult, it can in fact be said that an effective cult of personality existed at all. If a cult of personality is in essence illusory, what actually is it? Perhaps it is just an inevitable extension and consequence of dictatorial power, simply proof itself that a dictatorship exists.

Dikotter comes closest to answering these questions in an almost throwaway line written in respect of Caucescu (though it could be said to apply equally to the other dictators): “The cult of personality effectively prevented anyone else from building an independent power base”. I would have liked Dikotter to explore this theme further however, perhaps to explain what comes first, the dictatorship or the cult of personality? I felt that Dikotter didn’t quite address how the cult of personality was more valuable than any other tool at the dictator’s disposal as a means to retain power. Indeed if it was so important, surely it is a feature of every dictatorship?

Despite the questions I felt Dikotter left unanswered, this is an entertaining and informative read, and I learned some interesting facts along the way. As an example, of Mao’s minister Lin Biao, Dikotter notes (without providing a source) “The mere sound of running water gave him diarrhoea”, though it’s unclear whether or how this altered the course of the revolution. The book is a useful introduction to eight of the twentieth century’s most successful dictators, and while it doesn’t say anything particularly new, it is praiseworthy for being both absorbing and accessible.

Why new history books? What's wrong with the old ones? →