Roman Emperors from Augustus to Constantine 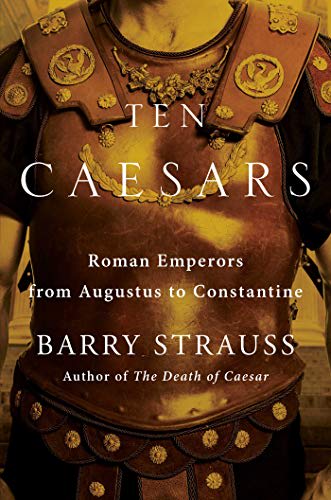 If you want a handy summary of the key Western Roman emperors from Augustus to Constantine, with an up-to-date view of the deeds and their legacies, I can confidently recommend this book: a strong work of narrative history.

If you are already a well-read Roman history patrician you may turn your nose up at this offering for the masses.

A week ago I went to see a blockbuster exhibition about an accused arsonist who murdered his wife and his mum. The star of the show (running until October 2021 at the British Museum in London) is of course the Roman emperor Nero. But was he really a bad guy? Maybe he was quite nice to the people who he didn’t kill? And did he or didn’t he burn down Rome to build himself a giant palace on the ashes?

These are the sorts of questions that people like to ask about Roman emperors. Professor Barry Strass’ Ten Ceasars: Roman Emperors from Augustus to Constantine – published in 2019 and prominently displayed in the exhibition gift shop – is an exemplar of this tradition: find out what really happened and then consider what side to take. On the one hand an emperor might have destroyed a town and slaughtered its inhabitants but on the other hand he secured the borders of the empire and kept the army happy. Pros and cons.

As Strauss notes in the summary of his chapter on Nero:

Where did Nero fail? By appointing an incompetent governor, he caused a major revolt in Judea. By confiscating property, he stirred up revolt in the Western provinces. By persecuting and executing elite enemies, and by embarrassing himself in the eyes of the elite through his personal behavior, he stirred up conspiracy and revolt.

Nero was the most cultivated and cruelest emperor Rome had seen… Nero’s predecessors, aristocrats all, were more martial and sometimes madder, but none was more magnificent.”

So even 2000 years later we are still judging the Romans. And in fact whenever we come across an individual in history it seems we can’t resist assessing their character and wondering what they would be like to meet. The Roman emperors are particularly enticing because we have enough source material to consider them as people, and as role models for absolute power they convey an extra frisson of pleasurable excitement.

An academic work might try to avoid over personalising history – it can after all result in crude oversimplification – and might instead delve into social status and change, or centrifugal and centripetal pressures. But the rest of us are still trying hard to remember which emperor was next and should it be AD or BC? When we have got the hang of the politics then we might think about the deeper questions.

Ten Ceasars (and the exhibition) is consciously and unashamedly “popular” as it tries to set (get?) the record straight: for now, if not for-once-and-for-all.

The name of the book is populist too. Strauss has explained that the reason he chose “Ten Ceasars” is that “Twelve Ceasars” was already taken (by Suetonius) and nowadays the number ten is more trendy. It could equally have been called “Best Ceasars: 10 most significant roman emperors in the first Millennium” which would have boosted the click-through rate.

Structure of the book

Ten Ceasars is divided into ten chapters each covering a significant emperor, but the narrative is actually a continuous one from Augustus to Constantine when the character of the Roman empire changed in important ways. The temporal gaps between emperors are filled in at the beginning or end of chapters when a few emperors in a row might be speedily introduced and swiftly dispatched.

So who do you think are the ten most significant Ceasars? According to Strauss they are:

If you managed to guess all of their names in advance: well done.

What do we learn about?

Each chapter is a run through of the life of that emperor – what were the circumstances of their birth, who was their family, how was it they got lined up for the top job. When in power we are told of the things they did, what important events were taking place in the empire at that time, and how they met their end. At the close of each chapter there is a short summation giving us Strauss’ view of the legacy of each emperor. The book mainly concentrates on politics and war. It also rounds off the story by telling us a bit about the significant women in the lives of the significant emperors, and a little on the intellectual and religious ideas at the time.

It is not a social history – if you want to find out what it was like to be an “ordinary person” in this period – what you might have eaten for breakfast, whether you made yourself sick to eat some more, and if you really wiped your bottom with a communal sponge on a stick – you will have to look elsewhere (figs; don’t think so; evidence very scatty).

There is no clear over-arching theme to follow, no master narrative with which to tell the story: Rome is not necessarily declining, nor falling, it is just sort of bumbling on from one emperor to the next. Of course this itself could be seen as the theme – the lack of fixed principle beyond the practical pursuit and continuation of power – but if so it is not well signposted to the reader.

The writing style is clear, authoritative and ever-so-slightly boring: a bit like reading the Economist. To make it a little more entertaining I imagined Strauss’ reading it out loud because his speaking voice is deep, melodic and thoughtful (have a listen to one of his many excellent podcast appearances) and I would encourage other readers to do the same.

A criticism? Or a strength?

The main criticism of the book is also a strength – it sticks closely to “showing how it really was” and never really tries to probe beyond the politics. You could see this as a missed opportunity, but equally if you haven’t read many books on this period before and this is what you want, it will meet your expectations nicely. I personally enjoyed it as a nice intro on the emperors that I hadn’t read much about before, and as a refresher on Nero before visiting the British museum.

So if you want a handy summary of the key Western Roman emperors and who did what at that time – or you are going to visit the Nero exhibition in London – I can confidently recommend this book. If you are already well-read on Roman politics and are looking for a fresh perspective I suspect you will find the content old news.

(1) A footnote on footnotes. Ten Ceasars is unusual in that there are no footnotes in the text. But if you look at the back of the book each chapter has a comprehensive list of references. In the Kindle version you can even click the on the reference to take you to the corresponding place in the chapter – but there is no link the other way. The references are key if you want to work out what is the origin of a particular story and so how likely it is to be true. I guess the footnotes in the text were removed to avoid interrupting the reader, but it is reassuring to know that the references do exist even if they are a little hidden (a bit like this footnote)!

← What Is History? - review