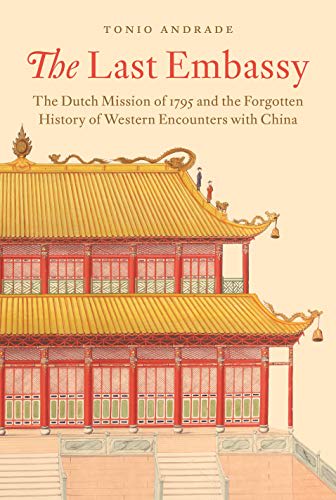 The Last Embassy offers an alternative viewpoint to that of China vs the West, an absorbing travelogue, and a sneak peek into the Qianlong Emperor’s court. It is also a very engaging read with a smooth but vivid writing style.

I would enthusiastically recommend this to anyone with an interest in China’s past – or present.

The Dutch present ships have arrived at the Tiger’s Mouth, like tall inns on the oyster-shell mirror of the water, a joyful noise ringing out. They’re filled with precious offerings, but first they must transmit their official document, wrapped in gold.

Tonio Andrade in his compelling new book “The Last Embassy: The Dutch Mission of 1795 and the Forgotten History of Western Encounters with China” tells us that this poem was written by the Chinese scholar Wang Wengao in 1795 to commemorate a Dutch embassy setting out for Beijing from Canton (now Guangzhou) in the far south of China. The ambassadors are heading off to congratulate the Qing emperor on a significant anniversary – 60 years on the throne.

Poetry was and is deeply integrated into Chinese culture. Most high-ranking Qing officials would be expected to be able to rattle out a few high-quality off-the-cuff stanzas on demand. Chinese emperors joined in the fun and many beautiful texts by ancient Chinese poets also include the margin notes and signatures of a whole sequence of sovereigns. Today as well, most Chinese kids will be able to recite a few poems by the age of four: my young son (half Chinese) enjoys a famous poem about a swan paddling on a lake, and this poem was itself composed by a seven year old in the 7th Century (“Swan, swan, swan: you sing towards the sky with your curved neck etc etc”).

British history and culture is much more a-poetic. I would guess that, like me, most Britons could name a famous poet or two but could not recite from them – other than perhaps a few vague ideas about daffodils, tigers, or summer days. The idea of government officials past or present composing poetry is laughable. The only recent example that springs to mind is Boris Johnson who – just before becoming foreign secretary in 2016 – composed a limerick about Recep Erdogan (the President of Turkey) that was deliberately as crude and insulting as possible – the context being that it was his entry for a “most offensive limerick” competition run by a magazine.

But while there are certainly differences between China and the West – poetry being just one – Tonio Andrade wants to remind us that the story of “culture clash” is an over-simplification. In particular, the story of late 18th century and 19th clashes between the west and China, both cultural and military, was not the only way for these two “worlds” to interact. There was another way, and this was demonstrated by the Dutch embassy of 1795. And while Andrade is careful to confine himself to the past, it is easy enough to draw parallels with the present where we have again a situation in which the “collision” of China and the West (i.e. the US) is sometimes portrayed as an unavoidable slow motion car crash. This book is a reminder that the steering wheel is a viable option.

What is it all about?

90% of the book is the story itself: following the Dutch embassy as they make their way to Beijing, spend a few weeks there, and then return to the South coast. It is written in the present tense and follows three people in particular: the ambassador himself: Titsingh; a director of the Dutch East India Company in Canton: Van Braam; and a rather embittered translator: Guignes. We see the world through their eyes because the book is primarily constructed from their journals and later publications.

The other 10% is the introduction and conclusion, which provide Andrade’s interpretation of what happened – what was its significance and why has the embassy been consistently downplayed or denigrated since it took place?

His argument is that the Dutch embassy is significant in itself, by showing that relationships between European powers and the Qing Empire at that time didn’t have to be confrontational – and also as a symbolic turning point in the perception of China in the West. While China was often admired before the end of the 18th Century, after this point it was increasingly seen as more-or-less hopelessly backward. Titsingh and Van Braam can be seen as the last of the European Sinophiles.

So why was the embassy downplayed subsequently? This was mainly due to the British who had visited recently themselves with the much more famous embassy of George Macartney. By painting the Dutch effort as a failure, their own disastrous embassy in 1793 could be presented as par-for-the-course rather than a double bogey (which it was). And because Holland was overrun by Napoleon at the same time as the Titsingh was greeting the Emperor, and the Dutch East India Company went bust soon after, there was no one left to defend the Dutch ambassadors, or profit from their efforts.

It’s all about the journey

However, this book is mostly about the journey, taking pleasure from travelling alongside Van Braam, Titsingh and Guignes as they experience the excitement, disappointments, the wonder and the dangers of traveling overland to Beijing. Then the thrill, satisfaction, confusion and anxiety of mingling with the imperial court celebrating the New Year and sixty years of rule.

Andrade’s writing style is very easy to read – I felt the chapters fly by effortlessly and pleasantly, in stark contrast to the struggles and tribulations of the Dutch and their Chinese escorts as they sank into muddy paths or heaved up steep, slippery mountain passes. He balances the available sources expertly, occasionally intervening to explain what the Dutch may have misunderstood or overlooked in their accounts. Stunning pictures, helpful maps and beautiful poems are blended into the text.

Another point of view

While the viewpoint of the Dutch is brought vividly to life, the Qing viewpoint is less well represented. I would have liked to see the Dutch as the Chinese saw them, rather than being left to infer this for ourselves. The reason we don’t get this is that the sources are just not so available. But it means that, although we broaden our horizons beyond the British view of the Qing, we are still getting a very Euro-centric outlook. Even if it is, in general, more positive, it is still highly prejudiced and very much an outsider’s perspective.

This book can also be challenged on its arguments: was the Dutch embassy really a viable alternative template for European states in their relationships with China? Or was it instead a rather desperate response to the increasingly beleaguered and precarious situation of the Dutch East India Company? I am persuaded by the former viewpoint – and the fact that it was possible to constructively engage – but I suspect that others won’t be.

The Last Embassy is “filled with precious offerings”: an alternative viewpoint to that of China vs the West, an engaging travelogue, and a sneak peek into the Qianlong Emperor’s court life. And while saying that it is “wrapped in gold” feels too flowery for this British reviewer, it is certainly pleasantly easy to swallow and digest. Given the current potential for storm clouds in the pacific, I would enthusiastically (and ineffectually…) recommended this for US, Chinese and European leaders. Even our own Boris Johnson might find it a source of future inspiration.