A New Monetary History of China 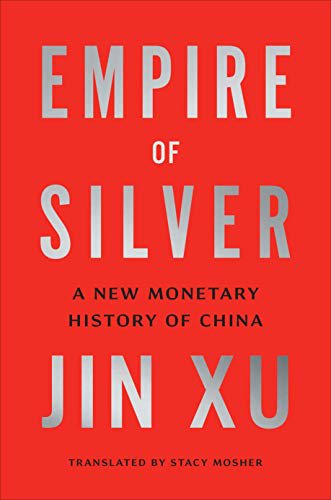 Reading the financial history book Empire of Silver: a new monetary history of China by Jin Xu can feel a bit like mining silver. The valuable nuggets of insight can be very labour intensive to extract. After you have finished you will have a little pile of intellectual treasures but many readers may feel that the payoff was not worth the effort.

Silver mining is not an easy job – when you dig the raw ore out of the ground it typically contains less than 0.1% silver – 1 part in a thousand. You then have to go through a laborious process of discarding the the 0.99% that you don’t want and turning that precious 0.1% into something shiny, attractive and valuable. Reading the financial history book Empire of Silver: a new monetary history of China by Jin Xu can feel a bit like mining silver. The valuable nuggets of insight can feel very laborious to extract. After you have finished you will have a little pile of intellectual treasures but many readers may feel that the payoff was not worth the effort.

A history of Chinese money

The story of Chinese money over the last thousand years is intriguing: full of drama, twists, and bankruptcies. And the story is as much about paper money as about silver currency. China was probably the first country to issue paper money: the Song dynasty (960–1279) – and its subjects – enjoying the benefits of lightweight, flexible and easily stackable wealth. In fact we are told that paper money originated in Sichuan because the main form of money in use at that time was iron coins – copper, used by the rest of the country, was in too short supply. But because iron is and was so abundant you would need to carry huge weights of it around to buy anything.

I’ve spent countless hours trudging back home from the supermarket with heavy bags of food, but the ordinary people of Sichuan in the 10th Century probably found the return journey from the market a relief because the stuff they bought was so much lighter than the coins that they had to hoick over there to buy it. We are told that some common purchases in the marketplace would require up to 5 strings of coins. With each string containing 770 coins this implies something more than 3,000 iron coins would be needed for routine shopping. This amount of coin weighed a staggering 30 kilograms (65 pounds).

Papering over the cracks

In order to get around the ridiculous amount of effort required to go shopping, someone had the bright idea of using the relatively advanced technology of paper to make a note representing the iron coins. As long as everyone agreed that this paper note could be converted back into metal money whenever you wanted, you have achieved the same spending power but at a fraction of the weight.

This local initiative was eventually recognised by the emperor who decided to do it on a country-wide scale, and the first national paper currency – jiaozi – was born in 1024. For a while everything went fine until towards the end of the 11th Century the (Northern) Song found itself strapped for cash and facing enemy armies all over the place. In this existential crisis money was printed in such large amounts that any one note was pretty much worthless and people stopped accepting them as payment. And presumably in Sichuan they flexed their muscles and returned to their back-breaking iron coins.

The Mongol Yuan (1271 to 1368) and Ming (1368 to 1644) dynasties which followed are described by the author as a contest between paper money (which the emperors liked because they could print it whenever they felt like it) and silver or copper (which most other people liked because the emperors couldn’t just print it whenever they felt like it). Eventually paper money was increasingly shunned as people came to the view that it was only worth the paper it was written on – and in the latter half of the 16th century the Ming emperor Longqing gave up the struggle and silver became the dominant currency – boosted by the massive influx from the silver-mines the Spanish had seized in Peru.

The book then takes us on a thousand year journey tracing the ups and downs of Chinese dynasties by charting the history of financial innovations and changes, ending with the fall of the Nationalist regime in 1949. The theme is that money in general and silver in particular has been both a cause of political and economic change and also an effect of political and economic change. Jin Xu handles the interaction of monetary history and political history adroitly – recognising for example that declining imports of silver which helped to weaken and undermine the Ming dynasty are not necessarily to “blame”. You could equally blame the brittle or passive imperial system. Or indeed note that monetary instability was common around the world.

She is also scrupulously fair minded. The section on the Opium Wars being a great example of her thoughtful approach on what is often a highly inflammatory (/shameful) episode.

So we have a fascinating subject matter and a careful author in Jin Xu. On paper it is a great combination, but my enthusiasm for the book was hugely deflated by three things:

It is a real struggle to read. I don’t mean that it covers tricky concepts or you have to engage your brain – which you do – but that it is about twice as long as it needs to be, padded out with countless quotes from economists and respected historians, which are mostly unnecessary except as a way to bolster the creds of the author. Partly this may be a “clash of styles” as it was originally published in 2017 in Chinese, and this style – so I am told by my wife (who is from China) – represents a long and often admired writing tradition. But even allowing for that the narrative has a tendency to meander, detour and repeat. I would have given up on this book if I didn’t have the intention of writing this review.

I don’t know who it is written for. Of course I was hoping it was written for me and on the face of it I think I am an ideal reader for this book: I work in the finance sector, am interested in Chinese culture, and enjoy history books. But it was too dry and focussed too often on what seemed like arcane details. Equally if I was an academic I might be wondering why there are so many Milton Friedman quotes, or why it starts off with a section on “what is money”? It ends up occupying a no-mans land: too dull for the average punter but too lightweight for the serious historian.

3. All roads lead to the present

A lesser charge but still worth airing is the implicit assumption underlying this book that history inexorably tends towards progress and that our current (financial) situation is the ideal to strive for. For example the author notes that a return to the gold standard is “unrealistic and inconsistent with the laws of historical evolution”. I would agree that it is unrealistic but I’m less convinced on the case for historical laws. Also the 500 year paper money period from about 1000 CE is described as an “ultimately failed” experiment – because silver is subsequently adopted as currency. But viewed another way paper money did a pretty good job for a very long time. You could equally argue that humans had a three thousand year “failed experiment” with horses until cars came along.

These criticisms come across as pretty harsh, and should be balanced by the fact that I am glad I read this book. I extracted some nuggets of pure silver which I will cherish and hoard away in the recesses of my brain, retrieving them occasionally to try to impress my wife. But the extraction was a painful process. Somewhere then, in this leaden work, is a brilliant and much shorter book – perhaps (this reviewer writes hopefully) a sequel written by the author for her English reading audience?