A Life of Alexander the Great 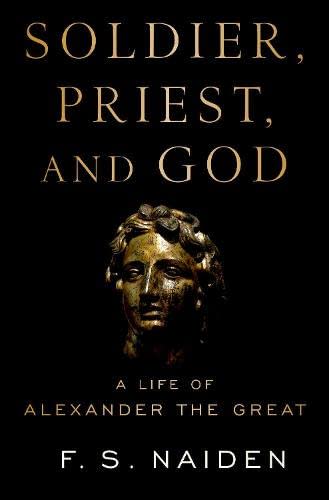 This book is an engaging study of the life of Alexander the Great with a particular focus on the role of religion. It will be of interest to those wishing to approach a familiar subject from a new perspective – ranging from Babylonian ritual slappings to Egyptian deific-adoption.

But while good, Soldier, Priest and God can be accused of over-reach, stretching arguments too thinly for the evidence – and wandering off into the no-man’s land beyond.

Alexander the Great is one of the most famous, and studied, figures in history. What more is left to be said? According to Professor Fred Naiden, rather a lot. In his opening chapter of Soldier, Priest and God: A Life of Alexander the Great, he asserts that ‘among the hundreds of Alexander biographies, none has focused on the topic of religion‘. The author then goes on to explain the deficiencies of previous efforts to understand the role of religion to Alexander and his times: apparently, ancient sources took religion for granted and so said little about it; the Romans knew and cared little about Near Eastern religions; the British viewed Alexander as a proto-Anglican who was punctilious in matters of ceremony but otherwise indifferent; other biographies have tended to focus on the military aspects of his reign. I confess to having not read those hundreds of other Alexander biographies, so I cannot comment on whether any of this is accurate or fair to them, but Professor Naiden certainly makes a convincing case that there is a gap in the market for his book.

Professor Naiden states in the introduction that his primary target audience is the general reader rather than the academic or student, although the latter is likely to find much that is worthwhile in the book, not least the appendices which include useful tables setting out acts of sacrifice and related rituals, acts of supplication, and formal meetings of Alexander’s companions.

Each chapter concludes with an extended quote from later historical writings on Alexander, drawing in particular from the Alexander Romance. These are fascinating, and the question of how later cultures and religions have portrayed and remembered Alexander is a substantive topic in its own right.

Professor Naiden integrates religion into the story of Alexander in a number of different ways, some of which I found more convincing than others. However, even where I wasn’t entirely convinced by the book’s line of argument, I found the ideas and evidence presented thought-provoking.

At its most convincing, the book establishes the interaction of political and religious legitimacy in ancient Europe and the Near East. As well as being a king and military leader, Alexander performed various religious roles: he oversaw divinations; led his companions in rites of thanksgiving; conducted funerals; became a son of Amun in Egypt; and engaged in ever more peculiar religious ceremonies (my favourite involves Babylonian priests slapping Alexander repeatedly, which had to be continued until he cried). Alexander used the religious authority conferred on him to achieve his objectives: when an annual religious observance threatened to interfere with the timing of a proposed invasion, he altered the calendar; when a priest interpreted an omen in an unhelpful way, Alexander claimed the authority to reinterpret it.

How religious was Alexander the Great?

Religion permeated the life of ancient peoples in a way that is, to some extent, alien to us. Military leaders relied on diviners scrutinizing sheep livers when making decisions; a multitude of free men (and occasionally women) from different stratum of society, from kings, through to chieftains, magistrates and the heads of households, performed rituals, including animal sacrifices, to help make predictions about the future. It is debatable how useful the term ‘priest’, used frequently in this book, is to the general reader when understanding such a society.

How religious was Alexander, and to what extent did religion motivate his decisions? The author describes Alexander as ‘devout’, whose military decisions and route of conquest was often driven by religious considerations. But was any of this unusual or unexpected in the context of the society he lived in? The book does not engage with this question. The author refers to Alexander as a ‘religious innovator’ but in my opinion does not do enough to substantiate this statement.

Alexander as an ‘armed tourist’

At times, the books makes specific claims about what motivated Alexander, but even after consulting the corresponding footnotes I was left unclear what justified these statements. We are told that ‘Alexander wanted pitched battles, no matter the odds, because he wanted proof that Zeus favoured him’; elsewhere we are told that Alexander thought of the expedition as a ‘personal holy war’. But how do we know this? Given the lack of direct evidence for Alexander’s own beliefs and motivations, any assertions on these topics appear speculative. The performance of religious ceremonies might denote underlying beliefs; or Alexander could have been merely performing a role which augmented his legitimacy in the eyes of newly conquered subjects.

The original, ‘official’, justification for the expedition was to punish Persia for invading Greece and to liberate Greek Asia Minor. But after conquering Persepolis they largely achieved this, and after taking the Persian city of Ecbatana, the Macedonians started to run out of rich cities to plunder. After this point, Alexander encountered growing opposition from his own troops and generals to further expansion. Subsequent excursions into central Asia and India can strike the modern observer as vanity projects, with Professor Naiden referring to the invasion of India as a ‘folly’. So what drove Alexander on? It is a fascinating question, but one that is difficult to answer. Perhaps Alexander was trying to immortalise his name as the greatest conqueror of all time; perhaps he was trying to outdo Cyrus the Great and establish a new dynasty; or perhaps he was some sort of ‘armed tourist’ (as described by Naiden) out to tick off some sights off from the bucket list.

Alexander as son of Amun and oath-man to Marduk Did Alexander’s approach to the religions of the places he conquered explain his successes and failures? The book argues that they do.

In the early chapters, the book contrasts Alexander’s religious policies in Egypt and Mesopotamia favourably with those of Darius. We are told that Darius did not serve the Egyptian gods as a pharaoh would, and that he did not serve as king or priest in Babylon. In this light, Alexander viewed ‘several great thrones of the Near East as effectively vacant’. In contrast, Alexander embraced the religious connotations of becoming pharaoh with particular enthusiasm. On his deathbed Alexander’s expressed his wish to be buried as a pharaoh at the Siwa Oasis where the oracle declared him to be the son of the deity Amun in 332 BC. For me this was amongst the most compelling evidence for Alexander’s own attitude to religion, or at least how he would like to be remembered by posterity. In Babylon, Alexander swore an oath to Marduk and became king, and therefore ruled legitimately in the eyes of the local priesthood.

As Alexander moved east his approach to the new religions he encountered became less conciliatory. At Persepolis he killed the male captives, some of whom were Persian priests (whether he knew that was unclear). We are told he largely ignored the local Persian gods, and refused to become king (at first because Darius was still alive). At Bactra, the Macedonians burned and buried bodies in contravention of local religious tradition. The author draws a link between these failures to accommodate local religious sensibilities and opposition to Alexander in Persia, including the rebellions of the Persian satrap Shatibrzana appointed by Alexander. But were these rebellions driven by religious considerations? No direct evidence is presented on this question.

We are also told that a conflict arose between the cult of Alexander as son of Amun, and the ‘cult of companionship’, with some companions such as Parmenio and his son Philotas denigrating Alexander’s Egyptian religious status and this contributing, in part, to Alexander’s decision to have them killed. By doing so, Alexander gave preference to his religious role in Egypt and weakened his bond with his companions. But Philotas was accused of conspiracy against Alexander and that was the ostensible reason for him being put to death; regardless of Alexander’s attitude to the ‘cult of companionship’, I am not clear that he would have spared Philotas in these circumstances. We are told that Alexander neglected Macedonian rites and therefore lowered his own troops’ morale, but what did this neglect consist of?

In India, the evidence for Alexander’s policies towards the local religions is patchy, but appears mostly to consist of misunderstanding and lack of engagement. He pursued a policy of mass enslavement that angered the Indians, whose own religion forbade the enslavement of worshippers of the gods of India. The author appears to draw a link between these policies and Alexander’s decision to turn back at the river Beas, stating that:

‘an invader with no local god to help him had made unwinnable wars on priests, monkeys and rivers.’

On returning to Babylon, Alexander’s religious aptitude, previously a strength, deserted him. In a bizarre ceremony, Babylonian priests responded to a bad omen for Alexander by having him substituted by a simpleton who they treated as king (so as to lure misfortune to the mock king). Alexander at first went along with this, but eventually lost patience and had the substitute executed. Following this misstep, the Babylonian clergy withdrew from Alexander and ceased to assist him.

In summary, the general thesis appears to be that, in his earlier conquests, Alexander was familiar with the religions of the peoples he conquered and was able to assimilate their cultures to his own purposes (the most obvious example being Egypt, whose religion and culture would have been familiar to educated Greeks of the time). But as his conquests took him further afield, the religions became more exotic, and he less able or willing to accommodate them. His refusal to understand the religions of the peoples he conquered resulted in opposition which frustrated his plans.

But everything seemed to work out ok…

I found this line of argument intriguing but unconvincing. The books draws attention to apparent mistakes Alexander made towards the end of his reign. I have no particular expertise in this area of history, but as a general observer I was left wondering what tangible impact these shortcomings had. For example, his religious policies in Persia may well have been cack-handed, but it still formed part of his empire on his deathbed. Perhaps if he had lived longer, his failures as an administrator and religious conciliator would have become apparent; but perhaps thankfully for him, he did not. He died controlling one of the largest empires in history, so whatever he did, he presumably did reasonably well up to that point in time.

I found this book an interesting and enjoyable read. The book itself states that it is targeted at the general reader. In addition, I feel those with some existing knowledge of this topic may enjoy it, by being presented with a perspective and ideas which, whilst debatable, are certainly thought-provoking.

If history is wrong, does it matter? →