How the Mongols Changed the World 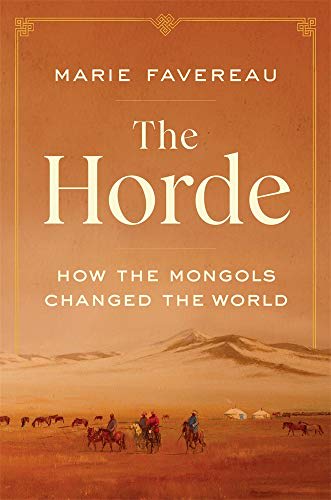 Favereau’s ‘The Horde’ gives you a glimpse of the world as it might have seemed to the Mongols – a vast stretch of grassland, mountains, rivers and forests, full of peoples with celebrated histories and complex lifestyles. “City land” was on the outside or the edge of this world and was relevant mainly when it could be exploited.

While the narrative can feel dense at times, this is an excellent book which will bring this world to life.

I first learned to fear the power of the Mongols while playing the computer game Medieval II Total War. Playing as king of the English I was pretty pleased with my thuggish army of knights and archers. By the year 1250 they had expanded my empire into most of France, a good proportion of the German states and also the Russian principalities. A small advance force of bowmen and men-at-arms had just attacked and captured Novgorod (unprovoked) when the Mongols appeared on the horizon.

It was a terrifying sight. The little Mongol figures – each one representing an entire army – popped up again and again on the edge of the battle map. There were literally hordes of them.

Their siege engines made short work of Novgorod’s gates and walls and the waiting Mongolian mounted troops sprang into action, racing towards the now defenceless city. I withdrew my meagre forces to the town square where I could at least be sure they wouldn’t run away – they had no-where left to go.

My doom was upon me (or at least upon my virtual electronic proxies) but for one thing: before withdrawing from their positions by the devastated walls the English archers had planted a double row of sharpened wooden stakes.

Unable to detect the spikes due to a bug in the game’s AI, wave upon wave of Mongols impaled themselves on the pointed stakes. It was carnage. The ones at the back pushed forward and those at the front died in their thousands. The lone surviving Mongol horse archer finally broke – and fled the battlefield.

My memories of the Mongols then are of a huge and terrifying war machine, invincible… except for their inability to detect a row of wooden stakes whose touch spelled instant death to mounted troops. But that’s the trouble with getting your history from computer games in general and Medieval II Total War in particular. You miss a lot of the subtleties.

This was why I was delighted to read Marie Favereau’s ‘The Horde, How the Mongols Changed the World’ – it goes far beyond the binary kill or be killed narrative of Mongols in the entertainment industry to a much deeper understanding of their society, giving the reader the perspective of an insider looking out, rather than an outsider looking in.

Back to the book…

Favereau’s focus is the Horde (derived from the Mongol “Orda”) also known as the Golden Horde, whose foundations were laid by by Chingghis Khan’s first son Jochi in the 1250s. It lasted as an empire or regime for about 250 years until the late 15th century. And it was enormous: even though it was only the “left bit” of the Mongol Empire it stretched from Bulgaria and Ukraine to Kazakhstan and Russia. If you wanted to walk today from its westernmost point (say Varna on the Black Sea Coast of Bulgaria) to its Easternmost point (perhaps Semey on the Irtysh River at the border of Kazakhstan), according to Google it would take you about four months continuous walking (8 hours a day at a good steady pace) to cross the almost 5,000km (3,000 miles).

Google maps link here if you are planning to give it a go: https://goo.gl/maps/nEos7ZaMSYtSc31t9.

While the focus is the Horde, her theme is their agency and legacy. She is keen that the Mongols should be appreciated beyond their ability to annihilate their contemporaries – they were not just destroyers they were also builders.

But even though the Mongols were not just destroyers they were nevertheless very good at destruction. The first section of the book describes the sweep westward in the 13th century in order to pursue and overcome their nomadic enemies. Their ambition, according to Favereau was not to take over the world, but instead to conquer their steppe rivals. This led them to conquer more and more lands as their enemies ran further and further away. But the victories were often hard fought and the battles sometimes lost – it is only in retrospect that we view the Mongols as the invincible killers.

It is the Mongol Horde as a developing and evolving regime that she is really interested in.

The nature of the Mongol regime was fundamentally different to most of the empires that we tend to be familiar with mainly because it was always on the move. There was an annual migration to and from the summer and winter grazing locations – as well as an ability to up sticks and relocate to a whole new area at will. The Horde did build cities but they were not for Mongols to live in. Instead they were to visit and a place of work for foreign traders and craftsmen.

Sedentary types such as ourselves easily make the mistake of thinking that a pastoral way of life is a primitive way of life. This is not necessarily the case. The origins of pastoralism in fact seem to have been as a response to the localised failure of urbanism – a handy “technology” that allows you to travel freely with tame food supplies in tow. The Mongols certainly had a highly sophisticated social structure that complemented their nomadic way of life.

Favereau also describes the Horde’s power structures: how they evolved from consensus building initially, to bloody family purges, on to a system where power rested in a “council” of regional leaders. She writes about how the Horde differed from other Mongol regimes in how they controlled their subject peoples, and the forces that bound the Mongols regimes together or pushed them apart.

She is particularly good at bringing to life the importance of the trade for the Horde – how the acquisition and distribution of “nice stuff” was what bound the elites to their khan and the people to their elites.

Expressing a sentiment that Maynard Keynes would have heartily approved of 700 hundred years later, one Mongol Khan stated:

“What benefit do we derive from all these stores [tens of thousands of bars of silver]? They have to be constantly guarded. Have it announced that everybody who wants a bar should come and take one!”

One reason I liked this book so much is that it creates a feeling empathy with the Mongols of the Horde. It allows you a glimpse of the world as it might have seemed to them – a vast stretch of grassland, mountains, rivers and forests, full of peoples with long and celebrated histories. “City land” was on the outside or the edge of this world and was relevant mainly when it could be exploited.

The one thing that I felt interfered the creation of this world-view, was the historical name-dropping. We are zooming through hundreds of years of Mongol family history, and just as I got familiar with one set of names, the next generation was plonked unceremoniously onto the page. To some extent this is unavoidable: there are just lots of people involved. But I felt that some of the narrative detail was very dense and not always needed. Anyone coming to the topic relatively fresh as I did will need to show some patience to figure out who all these people are – and whose names they will need to remember later.

But overall this is an excellent work and well worth the effort invested in it.

The effects of the Horde have echoed down the centuries: from “successor states” in Uzbekistan and Kazakhstan, to a continuity of culture, faith and political traditions in a much wider area. Instead of viewing the Mongols simply as savage uber-warriors – the baddies in a computer game – we should perhaps instead think of them more as we do Alexander the Great’s Greek empire: born in conquest, breaking down into constituent political parts, but nevertheless having a huge impact both in space and through time. Favereau’s ‘The Horde’ is an excellent book that will bring this world to life.