The Story of a Founding Myth 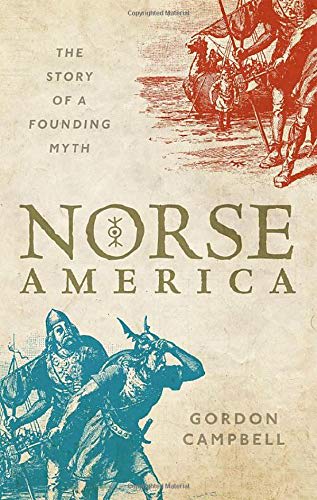 Norse America gives us an authoritative and very readable account of Viking settlement in North America. But it is also the fascinating and sometimes troubling story of the “Vikings first” advocates: a mix of dreamers, pranksters, fraudsters – and those trying to drum up the tourist trade.

A gripping read, it makes us question the “truth” of history that we sometimes take for granted, and how we choose our stories is as important as their accuracy.

On a clear sunny day in 1170 CE, the Welsh prince Madoc, illegitimate son of the famous Owain Gwynedd, set sail from Rhos-on-Sea on the north coast of Wales. Travelling with him in his several ships were over 100 men, women and children. Passing the Great Orme copper mound and then rounding the sacred and ancient druidical island of Anglesey, the voyagers shed tears of joy as well as sadness. They were fleeing the deadly conflict between Owain Gwynedd’s sons and seeking a new life. Undergoing great hardship they crossed the vast expanse of the Atlantic ocean, whizzed down the eastern cost of north America, nipped round the great Florida peninsular before pulling up in Mobile Bay in the state of what is now Alabama.

Kissing the sand and giving thanks for their deliverance, they unloaded their gear and established a small but thriving Welsh speaking colony over 300 years before the Genoan Christopher Columbus crossed the Atlantic with his own flotilla. Evidence for this precocious feat of colonisation was preserved in the language of the settlers, with reports of Welsh speaking groups of “native Americans” persisting through to the 18th Century.

The problem with this particular foundation narrative, as Gordon Campbell tells us in his thought provoking new book Norse America: The Story of a Founding Myth, is that it is complete fabrication: there is no such person as Madoc ap Owain Gwynedd and no such voyage took place. It may not even have been a sunny day when they (didn’t) set off.

Which raises the interesting question of what counts and doesn’t count as a North American origin story?

A story that clearly didn’t happen like the Madoc one above is a step too far for most people: this doesn’t count. The Norse (Viking) settling in Greenland for 500 years since the 10th century? This also doesn’t count because Greenland is not “proper” North America despite being part of the same continent. Christopher Columbus? He disembarked on the Caribbean islands only and insisted until his dying day that he had discovered the eastern part of the Indies and that there was no such place as America. But that counts. A handful of Norsemen arriving in what is now the United States of America, this also “counts” – if we can find the evidence.

What about native American peoples who had been in the Americas for tens of thousands of years and numbered perhaps 50 million before Europeans arrived? For those writing the history books since Columbus – tragically – they do not seem to have been considered particularly relevant.

What is the book about?

Gordon Campbell’s excellent book is really two books in one: an evidence-based assessment of what we know (and don’t know) about the Greenland Norse settlements, their voyages further south, and their eventual abandonment of Greenland. But it is also a “story about the story”: how and why people have interpreted and often invented evidence to promote the “Norse first” narrative.

A story of the Norse in North America

The first section (actually the chapters 4, 5 and 6) examining what we know about what happened to the Greenland Norse conveys a sense of what it might have been like to be there, without dramatising or straying from the evidence – which is all carefully explained.

It functions as a useful corrective to other accounts, which for example have tended to read the sagas as if they were “log books” rather than “family history books” written down centuries after the events they are describing, and which blend reality with myth and flattery. It also provides a useful warning against over-interpretation of what we do know. For example Jared Diamond’s popular account of the Greenland Norse’s disappearance in his book Collapse (which I enjoyed and value) is rightly criticised for inventing a turbulent history of the last 40 years of the settlement – because there is no evidence to suggest this is the case. (The only thing which we can say for sure is that it looks like a planned and ordered abandonment given that everything had been tidied up and all the valuables had been packed.)

We also get a careful consideration of what evidence there is for North American Norse settlements outside Greenland.

A story of the story of the Norse in North America The second book (chapters 1 – 3, and 7 – 10) deals with the historiography of the Greenland Norse story. Firstly, why do we care about it at all? A few hundred Vikings may or may not have had a short-lived settlement somewhere on the edge of the main North American landmass – but given their direct impact was either zero or vanishingly small, what’s all the fuss about?

The benign view is that it is a mysterious and heroic death or glory adventure far from home that we can enjoy in much the same way as we might a Spiderman movie. The Vikings are perennial favourites as lovable but murderous rogues and this is just the New World chapter of a wider obsession.

The more disturbing perspective is that it has and still can function as a classic piece of historical misdirection that distracts from and often undermines the history of the native American peoples.

For perhaps the most obvious example of this: the impressive pre-Hispanic Cahokia Mounds have been classified as Viking on the assumption that native Americans wouldn’t have been able to build them – and the idea Vikings that were the builders persists among some visitors today, according to Campbell.

So as well as a story about Vikings, Norse America is a fascinating and sometimes troubling account of the main promoters of the “Vikings-were-here” school of thought, who seem to be a mix of dreamers, pranksters / fraudsters, and those trying to drum up the tourist trade.

The only criticism I would level at this book is that at times it feels that Campbell goes too far down the conspiracy theorist rabbit hole: is overly concerned with documenting and debunking whatever crazy viking-templar mash-up that is doing the rounds on Snap-Tok or Twitter-Book. Just because someone has #vikings on the internet should we pay attention?

The flip side of this is that Campbell is clearly a thorough investigator who tries to understand rather than lambast the Viking’s supporters. Although he clearly thinks that many of them are bonkers.

Campbell himself comes across as the very opposite of bonkers (saners?) with his lucid, precise and succinct writing style – plus relevant academic credentials. I found this to be a gripping read, despite Campbell’s clear intention to eschew the dramatic narrative.

It makes us question the “truth” of the stories from history that we tell ourselves, and going further: how we choose those stories is as important as the accuracy of the stories. We might also ask why we choose to re-tell stories that we know to be false – of clear-eyed Prince Madoc sailing towards the setting sun, with a hymn on his lips, salt on his beard, and a wetted finger raised to test the direction of the hot mid-Atlantic air.