The English People at War in the Age of Henry VIII 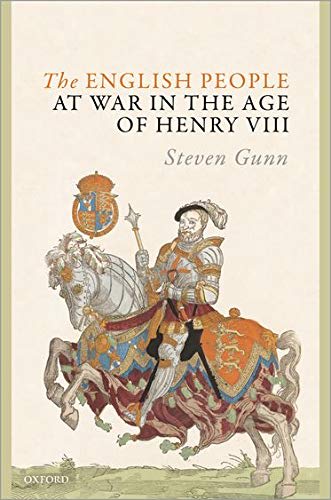 The Reformation is of undisputed importance in subsequent English history. It can be argued that, as a result, the history of warfare during this period and its importance to the lives of ordinary Englishmen and women have been, in relative terms, neglected.

This informative and insightful book does a commendable job of rectifying this imbalance.

Disclaimer: the reviewer is an ex student of Professor Steven Gunn.

Based on James Ford Lectures in British History given in 2015, Professor Steven Gunn’s book considers warfare in the ‘age of Henry VIII’ (adopting a loose definition covering a period of around hundred years from the 1470s to the 1570s) and how it was experienced by the English people, from nobility, gentry, clergy, through to artisans, yeomen, and peasants. The focus is on the impact of war on English governance and people, rather than recounting the strategies of battles fought or the politics of international relations.

What it is all about?

The book commences by establishing the prevalence of war in England during this time frame. In this period, England pursued wars against its traditional enemies the French and the Scots, as well against onetime allies the Low Countries. The period also witnessed domestic revolts and, from 1534, a sustained military campaign in Ireland. When added together, nearly three-quarters of the years between 1475 and 1575 saw some form of military activity by the English. As Professor Gunn notes, this was an ‘age of war’, and he makes a convincing case that the impact of war on England in this period should be given a similar historical treatment as that of the Reformation; parallels between the impact of war and the Reformation on English society are a recurring theme of the book.

The book then considers how warfare impacted on the English from a number of different perspectives: how information on wars was spread and consumed; the adoption of new weaponry and military terminology from the continent; the mechanics of how armies were put together, armed and financed; the role played by the nobility and gentry, town and country, in organising and participating in warfare; the impact of war on the economy; the extent to which ordinary people fought, died and were injured in wars; and how warfare impacted on the relationship between a monarch and his or her people, including the ideological justification for wars.

The book concludes by comparing the impact of warfare on the English people with experiences and developments elsewhere in Europe. By doing so, the book helps put the matters considered in a broader international context.

The depth of information drawn upon means that one of the book’s strengths is its ability to convey the nuances and range of different experiences of warfare. For example, how the role played by a household servant in fighting for his lord might differ from a tenant; how a village, a market town, a coastal port and a town bordering Scotland might all experience, and respond to, the demands of warfare in different ways. The breadth and range of the book is impressive.

The book, at just over 150 pages (excluding notes, bibliography and index), manages to include a wealth of information, including extensive quotes from primary written sources. The focus is on the source materials, with reasoned analysis and conclusions drawn from that. The range of sources referred to is extensive, covering everything from almanacs, books, letters, diaries, case law, parish records, coroners’ inquest reports through to buildings and fortifications.

Professor Gunn was a tutor of mine at university. The last time we met, Professor Gunn sat next to me at dinner and explained his work on the ‘Everyday life and fatal hazard’ project which uses coroners’ inquest reports on accidental deaths to research causes of death in Tudor England. I was fascinated by some of the insights Professor Gunn had gained as part of that project. For example, the frequency of accidental deaths by archery practice demonstrating how widespread archery practice was at that time. It is clear that a lot of that know-how has gone in this work, and I would encourage anyone interested in this period of history to examine the project’s website which has an abundance of similarly intriguing information and insights: http://tudoraccidents.history.ox.ac.uk/.

As with any history book, the style of writing may appeal to the general reader or not, depending on his or her taste. It will certainly be of interest, and use, to students and academics studying related topics. For the general history reader, many will enjoy and be interested by the granularity of the information included; others may find the analysis drawn from that information somewhat cautious. It does not put forward any overarching or unifying theories that link together its various observations; if you are fan of grand theory history (in the style of Yuval Noah Harari perhaps) then it is possible that you might find the style of writing in this book a little on the dry side.

The book is likely to be of interest to students and academics studying Tudor England and military and social history in early modern Europe. The book clearly benefits from extensive familiarity with the source materials and considerable original research. At 121 pages, the notes and bibliography sections provide ample opportunity to explore related topics and review source materials in further detail.

The book will also be of interest to the general reader. Such a reader is likely to be attracted to the book’s clear writing style, together with Professor Gunn’s talent for the well-placed anecdote and wry observation.

An informative and engaging book on an important topic, the book is highly recommended.