the first battle of the cold war 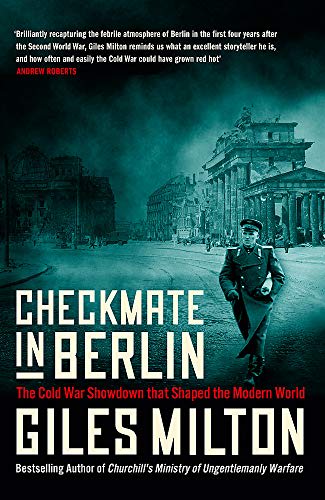 A thrilling read, Giles Milton combines a strong narrative of four tense years in Berlin in the aftermath of the Second World War with personal stories at turns harrowing and uplifting.

Checkmate in Berlin describes the opening gambit in a conflict which would continue for the next 40 years.

When the Americans and British rolled into Berlin in June 1945, optimism was high that power sharing with their Russian allies would work – it was imperative it did. But Stalin had other plans, despite agreements reached at Yalta and Potsdam. After an orgy of violence, rape and looting, the Communists set out to seize control over Berlin, culminating in the blockade. Ultimately though, a defiant airlift, in an effort resonant of Dunkirk, brought food and supplies to 2.4 million freezing, starving West Berliners. Shortly afterwards, NATO and the Warsaw Pact were established, and the battle lines were drawn for the Cold War.

A thrilling read, Giles Milton combines a strong narrative of four tense years in Berlin in the aftermath of the Second World War with personal stories at turns harrowing and uplifting.

The book charts the build up in tension between the occupying powers with a sense of foreboding and inevitability. The Russians have a clarity of strategic vision which completely outclasses their Western allies who struggle to grasp the Communists have a different objective from what had been agreed: to bring all Europe into their sphere of influence. Frequently the Western allies could not agree amongst themselves, making it difficult to resist, or even understand, the Russian threat.

This failure to appreciate reality has its parallels in the current day as Putin plays out his grand strategy to the West’s often ineffectual and disjointed response.

Nowhere was this clash of cultures more aptly illustrated by the wild boar hunt organised by Brigadier Hinde, the leading British representative on the Berlin Kommandatura, who invited his US and Russian counterparts, Colonel Howley and General Kotikov respectively. The Russians opened up with submachine guns leaving a massacre of boar, and the Americans and British speechless, scrambling on the ground for safety.

It was fascinating how much came down to personalities: in the words of Howley they ‘determined which nation was most influential’. Milton focuses on these influential military and political characters, describing a rich array of their stories, successes and flaws, engaging the reader in a way which was utterly absorbing.

He does not neglect the German civilians, however, contrasting their experiences with those of the occupying powers. Berlin was a ‘city that no longer had any cats, dogs or birds, for all had been eaten by starving Berliners’, whilst the senior military commanders consumed copious quantities of caviar in their requisitioned villas. If this were a game of chess, the board was a certain hell on Earth.

The logistical triumph of the airlift is brilliantly recaptured in the final chapters of the book as further characters and eccentrics take to the stage. As Milton points out: ‘there are times when the only solution to a problem is to summon the service of a British-born maverick’. How true.

But whilst this was a heroic success for the West, and undoubtedly important in setting the scene for the formation of NATO, this was less checkmate in Berlin and more opening gambit in a conflict which would continue for the next 40 years.

← If history is wrong, does it matter?