What is Popular History?

What can I expect from a popular history book?

So if you are not a professional academic historian and you find a history book interesting then you can classify it as popular history.

What’s the difference between a popular and academic history book?

People often read popular history to find out what happened. Whereas an academic already knows the key events of their period and could instead be looking at a very particular aspect of their topic. 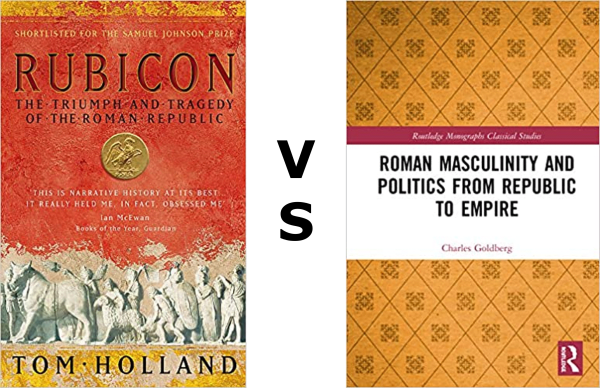 For example, if you read “Rubicon: The Triumph and Tragedy of the Roman Republic” by Tom Holland you will get a rollercoaster narrative account of the expansion and fall of the Roman republic. It costs about £10 from Amazon.co.uk or $9 on Amazon.com. It has attracted (at time of writing) 417 global reviews on Amazon.

An academic book on the same period (chosen at random) is “Roman Masculinity and Politics from Republic to Empire book” by Charles Goldberg. According to the publisher it “provides a fascinating insight into the intertwined nature of masculinity and political power for anyone interested in Roman political and social history, and those working on gender in the ancient world more broadly”. It costs £120 / $135 on Amazon and so far has attracted no reviews on that site (although to be fair it was only published 6 months ago in December 2020).

A book as a conversation… but with who?

You can think of any book as a conversation – or at least the attempt at one – between the author and the reader. The deeper you get into a historical topic the fewer people will be interested in having that conversation with you, and so the smaller the readership. When you get deep enough your book will only be able to “talk” to academics, because they are the only ones who have the foundation of knowledge needed for that conversation. At this point it becomes an academic history book and only librarians can afford a copy.

Over time (we hope!) the knowledge and insights accumulated by professional historians will percolate out of the ivory towers and into the public consciousness, usually through a popular history book or television series.

One of the things that we are trying to do with this book blog is root around in the publishers’ catalogues for popular history books that are not getting much coverage but look really interesting – with topics that we want to hear and talk about.

You can probably see by now that I am a big fan of popular history. But the genre does have its detractors. It has sometimes been seen as less rigorous in its approach and more likely to cover the same old topics – another helping of world War 2 anyone? I think that this can be true of popular history. But it can also be true of any work of non-fiction including academic work.

When I studied history at university I would occasionally get frustrated that the topics historians chose to write about would follow pretty narrow tramlines – and would usually be in direct response to another book or article on the same topic. So “more of the same” can be a problem in academic history too.

And you can have more or less reliable academic history articles as well.

And going back to popular history: so many of these books are published every month covering such a wide range of geographical areas, time periods, subjects and styles that you can always find something new and interesting to get your teeth into.