Book reviews and culture wars - an interview with Suleiman the Magnificent

We were recently lucky enough to talk to Suleiman the Magnificent who I was particular keen to quiz on the subject of negative “culture war” book reviews on Amazon. The recording itself got corrupted when I spilt coffee on my laptop but fortunately we do still have the transcript.

If you just want to skip to the conclusion you can read Suleiman's three golden rules for writing “culture peace” book reviews at the bottom of this article1. 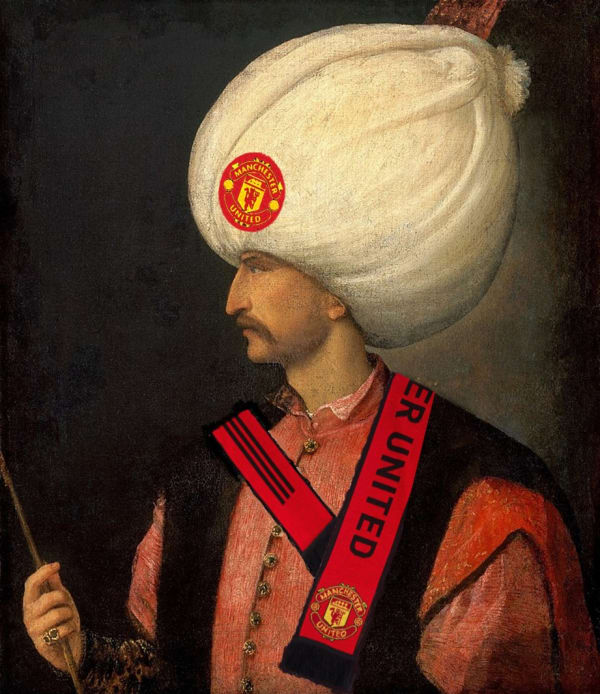 Sulieman the Magnificent in a rare portrait showing his full regalia

Suleiman - thanks for talking to us today.

My pleasure, it is a great honour for you.

Before we get started can you tell me a little about yourself?

What is there to say that has not already been said a thousand times? I am the sultan of the celestial throne, possessor of the moral qualities of the prophets, saint above all saints, whose face resembles the shining sun. In my free time I enjoy books, Manchester United Football Club and guns, especially cannons.

Now I'll cut to the chase - you have recently featured, along with your family, in a book Ottomans: Khans, Caesars and Caliphs by Marc David Baer. We reviewed it and liked it. So did others. But in the murky world of amazon reviews there were some extremely negative opinions - despite the majority being positive and an average 4 star rating. But before we get on to that what did you think of the book?

When my copy arrived the cover was damaged. Given I had bought it in part for its shiny golden aesthetic this was very disappointing. I left a one star review on Amazon myself.

That's a shame - but what did you think about the content of the book?

I thought it was a very good, very detailed and extremely impudent book.

What about the other reviews on Amazon for example there was one by C___ which I will read out to you in redacted form:

Currently the “top review” on Amazon for the book Ottomans by Mark David Baer:

Reviewed in the United Kingdom on 22 November 2021

The Turks were not the heirs of Rome but instead were Asiatic barbarians who destroyed the higher and better civilisation of Byzantium. They are not European because they are longstanding Islamic enemies of Europe and the West... Our world would be a far less enlightened place than it actually is, thanks to the dogged defence of Europe and ultimately the victories over Islam of the more educated and progressive forces of the Christian/secular West.

What did you think of that?

What can I say? This is clearly written by a Frank. That is the only morsel of information in this review.

What do you mean?

What can we tell from this review? Nothing about the book. The reviewer has become the only subject of the review. Who is he? He doesn't like the glorious Ottoman empire and he likes the Byzantine empire. He doesn't like Islam and he likes Christendom. Clearly this is no scholar, rather he is like a supporter of Topkapı PC, all he wants to do is shout for his team.

But isn't it fair to argue that one team is better than another?

If you are a football fan blinded by loyalty to your team that question will have only one answer. If nothing can change that answer - no new information, no new perspective - that answer has no value, it is just a statement of identity. If a review is simply a statement of identity of the reviewer, this is no longer a review - it is simply a myview.

Now playing devils advocate I could say that the main reason you don't like the review is that the reviewer doesn't like your Ottoman empire...

In my empire there is room for difference - I allow others who are not like me to live freely, as long as they pay their taxes and are loyal to me. What I dislike in the review is not its central scurillous accusation - which I can tolerate - but the fact that there is no question of examining the arguments in the book, only a dismissal of the (overly simplified) conclusion.

You've lost me. Isn't that the same thing?

Let me explain it as I would to one who has had no training in the philosophy of logic. If the argument is saying 1 + 2 + 3 = 6, the error here is to say “I hate the number 6! My favourite is the number 4 which is a much better number”. There is no attempt to refute the or engage with the sum itself only the product of that sum.

Ok I think I get it. But surely it is reasonable to disagree with a conclusion in isolation? Aren't some conclusions just unacceptable.

The only conclusion which is unacceptable is one which creates harm. Otherwise a philosopher must engage with the arguments.

Isn't that a bit rich from someone who has fought wars and killed thousands of people?

My riches are endless. But my patience is not. Be careful how far you go in your impudence young man.

Ok so going back to the Amazon review, we can see that the reviewer has had a very negative emotional reaction to this book. Isn't that useful for people to know about?

One must not be a slave to ones emotions, either positive or negative. In the case of a negative emotion you should look in yourself and try to uncover the source of that emotion. Why are you affected so significantly? This way you will better understand yourself and be able to assess the position of others. If you let your emotion rule you, all you can hear is your own indignation.

Well thanks Suleiman it's been an absolutely brilliant chat but that's all we've got time for today. Can you sum up by telling me the most important things to keep in mind when writing a culture war free book review - a culture peace review, if you will?

These three lessons any book reviewer should engrave on their heart:

Thanks again Suleiman and goodbye.

Goodbye - I have been a delight.