The Fabric of Civilization

How Textiles Made the World 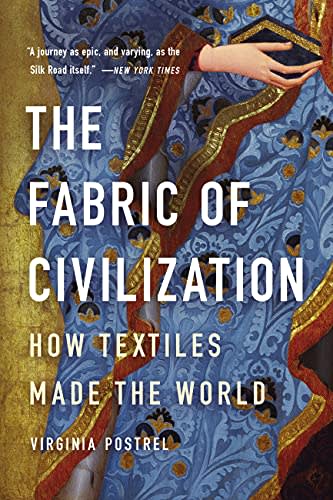 A great read for anyone interested in textiles, industry or society, The Fabric of Civilisation brings into focus the technological developments in textiles: fibres, yarns, cloths and dyeing.

The book spins a thread leading from prehistory to the near future, showing the interwoven technologies and developments from different civilisations across the world.

Surrounded by textiles, we’re largely oblivious to their existence and the knowledge and efforts embodied in every scrap of fabric.

Virginia Postrel, The Fabric of Civilisation

Any visitor to the West Berkshire Museum can see the Newbury Coat, a coat made in 1811 from sheep to finished garment within a day using the technologies at Greenham Mill as the result of a bet between its owner, John Coxton, and Sir John Throckmorton. Coxton was keen to showcase the improvements in his mill machinery, but readers of The Fabric of Civilisation: How Textiles Changed the World by Virginia Postrel will realise that the feat also demonstrates millennia of technological advances in sheep breeding, spinning techniques, weaving methods and dyeing.

As fabric degrades, it hasn’t left behind the archaeological record that ceramics, metals or bones have, but as a result of new methods more information about historical and pre-historical fabrics is becoming available. Postrel draws on this and other sources to tell us about the long history of silk, wool, cotton and linen and the ways which the development of fabric has resulted in other technological and societal developments across the world. The book is split into chapters on fibre, thread, cloth, dye, traders, consumers and innovation.

The fibre section shows us how some chance and a lot of selective breeding resulted in the forms of cotton, silk, wool and linen that we know today. Sheep have been bred for longer fleeces which can be sheared rather than having to be plucked, cotton has been bred for longer fibres and silkworms have been bred to be resistant to disease, with the mulberry trees used to feed them bred to produce abundant leaves. The production of the fibres also required complicated processes from temperature regulation for silkworms to finicky processes to soften flax fibres. What we think of as “natural” fibres are really no more natural than the UK’s sheep-shorn landscapes.

Hanging by a thread

Spinning is an example of technology transferring across industries and geographies; it is thought that the spinning wheel, which spun horizontally rather than vertically like the spindles which came before it, is based on technology for extruding silk, and in turn introduced the drive belt.

What a tangled web we weave

Once the yarn is spun, it has to be woven to form cloth. While plain weaving can be done fairly simply, as soon as patterns are involved it becomes very complicated. As a result, brocades and patterns could be used to show the status of the wearer or owner of the cloth; the patterns were woven into the cloth using supplementary weft threads, and a focus of technological development was speeding this up and making it more easily repeatable - which fed into other industries such as ship building, and later, computer programming.

For clothing, knitted fabric is beginning to overtake woven fabrics, as it can stretch with body movements and has the potential to be created as a 3D shape, reducing the waste caused by weaving flat fabric and then cutting out the shapes required to make the clothes.

Dyed in the wool

While fabric had been dyed since pre-historical times, Postrel draws a line between dyeing being carried out in a similar way to cooking up until the eighteenth century, and the discoveries in chemistry from then on which drove development and increased understanding. Demand for new dyes sped up developments in chemistry, with dye innovation leading to innovation in many other industries including pharmaceuticals and plastics.

Meanwhile, the trade in textiles (and presumably other things such as metals, grains and spices) led to developments in banking and accountancy, such as bills of exchange and double-entry bookkeeping. Textiles were even used both officially and unofficially as currency, and according to Postrel - who may be biased - provided a more stable monetary system than coins.

Postrel is excellent at making her readers see commonplace and ubiquitous textiles in a new light.

Sitting in the lounge as I write, I have a much greater appreciation for all the work and innovation that has gone into the curtains, carpet, sofa coverings and cushions as well as the clothes I’m wearing.

She’s also very good at showing that the story of the development of textiles is still continuing, with a focus now on sustainability and the environment, automation and the use of software to increase the range of what we can make, and functional textiles with coatings and new fibres to change the way that our clothes behave.

With her focus on technological developments, she’s sometimes dismissive of the human cost of those developments. The level of detail, particularly in the processes of weaving and dyeing, is impressive but also rather difficult to take in at times.

The Fabric of Civilisation: How Textiles Changed the World is a great read for anyone with even the vaguest of interests in textiles, or indeed industry or the development of society in general. It’s a fascinating look at the way that their production and use was already pretty well developed in the distant past, and how that development has continued through the Industrial Revolution and beyond, and is still continuing today.

← Reflections on WordPress – 8 months in