From the Ice Age to the Coming of the Romans 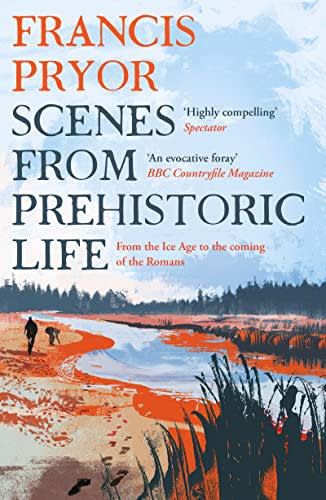 An excellent book but it comes with some health warnings: you will need to dig it out from the layers of memoir that have accumulated above it, the judgements can be rather wayward, and the author recycles some his previous material.

If you can accept this you will be presented with a series of fascinating and remarkable snapshots from the lives of the peoples of pre-historic Britain, making a great introduction to the subject.

4070 years ago on the east coast of Britain a small community of about 200 people built a circular wooden palisade about 7 metres across. Right in the centre of this circle of upright timbers was an oak tree. The oak tree was placed there by the same group of people. How can we be so sure? Well it clearly hadn’t grown there because it was upside down with the roots in the air and the top of the tree was buried in the soil.

What would make 200 of your relatives dig up an oak tree, plant it again but the wrong way up, and surround the whole thing with a solid timber wall?

This is the site now known as Seahenge, described by the author Francis Pryor, who acts as our tour guide in Scenes from Prehistoric Life: From the Ice Age to the Coming of the Romans. He expertly selects archaeological sites and finds to help us build up a picture of what our ancestors might have been up to for the last 10,000 years or so.

The level of detail can be remarkable.

Going back to Seahenge: when I said 4070 years ago I wasn’t rounding. Writing now in 2021 Pryor tells us that it is exactly 4070 years ago in 2049 BCE when the trees were cut down, which we can tell from a variety of dating techniques. To be more precise: the spring or early summer of this year, judging by the condition of the wood (“springy” I suppose).

If your ancestors had children on average at age 20 this is 203.5 generations ago, so when your great x201 grandfather was a 10 year old boy.

After examining every piece of timber and the oak tree extremely carefully, archaeologists determined that at least 50 axes had been used in its construction. They were able to do this because every axe leaves a slightly different cut mark “signature”. Because bronze axes were not so common at this time – Pryor suggests that in modern terms a bronze axe at this time would have cost as much as a car – we can assume that most people would have only owned one (except for a few wealthy show-offs who might have had a large family axe and then a smaller faster one for the weekends).

Assuming 50 axes = 50 people Pryor then suggests that this would mean a group of about 200 people – allowing for non-tree felling compatriots (children, old people, and those doing the domestic chores).

What were they up to?

So why did they do it? What would make 200 of your relatives dig up an oak tree, plant it again but the wrong way up, and surround the whole thing with a solid timber wall?

Pryor tells us a key clue may be a bit of coffin found in a nearby burial mound. Perhaps then, placed in the upturned roots of the oak tree and exposed to the air would have been an open wooden casket. Seahenge becomes the site of a sky burial in which the body of the person who has died is exposed to the elements and the birds – and bigger wild animals kept out – until only the skeleton is left.

Once the circle of timbers and the inverted central oak tree had been set in place, the funeral rites could begin. The body would have been carried into the shrine through the single narrow entranceway. It was probably then ceremoniously place on top of the inverted tree roots, which formed an outstretched, hand-like surface… I have often written about the extraordinary smell of tannin on the air when I first entered the completed reconstruction of the Seahenge timber enclosure… One must imagine such a strong smell during the ceremonies, compounded no doubt by darkness, fire and the sound of rhythmical drumming.

This was not an evening your 10 year old great x201 grandfather would forget in a hurry – it might even, extrapolating from Pryor – have been the first time he got plastered.

What does the book cover?

Francis Pryor has written 15 digestible chapters of about 20 pages each, describing 2 or 3 of these archaeological sites from pre-history (until the Romans arrive). This is a huge span of time with the first site being over 500,000 years ago (some footprints), but apart from this one, the focus is on post ice-age Britain over the last 10,000 years, giving us a flavour of the hunter gatherer types (Mesolithic), then the farmers (Neolithic), then farmers with bronze (bronze age), then farmers with iron and hill top fortifications (iron age).

Pryor has laid out a nice selection of these sites for us, allowing us a nibble at different times, places and areas of life. For example we looked at the sky-burial of Seahenge above, but we are also shown pre-historic boats, salt-works, trackways, houses and more.

One of Pryor’s key aims is to give us a feel for what people might have been doing and thinking in these olden times: to make the past human and alive.

While the content selection is excellent I found the style of the book a bit too… personal. This book is about evenly split between actual prehistory and a Francis Pryor memoir. For me the memoirs distracted more than illuminated. Want to know Pryor’s favourite UK holiday destinations, his thoughts on being a teenage tractor driver, or which “A roads” he likes to take to get to Yorkshire? If you do you are in luck. If not you will have to be prepared to zone out periodically.

More problematic is the way in which he seems to arrive at fairly heroic archaeological conclusions based on these personal experiences. For example in one scene he describes the excavation of a prehistoric salt works: there are some open air sea-water evaporation ditches, fire-pits to boil off the remaining water etc. So far so good.

He then goes on to say that it “seems likely” that the work would have been done by “selected members of several related families” and that “many… would have been young adults…”. He describes his own experience as a 16 year old tractor driver: he worked hard but had a great time. With this insight – and no other evidence – he suspects that “the people working the salterns would probably have seen the time in the marshes as something of a holiday: a refreshing break from the routines of the farming year.”

Maybe… or maybe they were malnourished slave labourers who were beaten terribly and cried every night. This conclusion is based on my experience of being forced to do the hoovering by my parents aged 12 even when I really wanted to go outside to play football. Of course I can’t say “trust me: I’m an archaeologist” whereas Pryor can…

Standing up for the old guys

I suspect that part of the reason for Pryor’s approach (which is repeated throughout the book) is that too often he has seen prehistoric people being portrayed either as uncultured cavemen or as constantly warring tribes whereas instead they were just humans like us. But he ends up over-compensating and by displaying them as unchanging paragons of community virtue (over thousands and thousand of years), he risks ending up with another unhelpful stereotype. The “noble ancestor” is an upgrade from the “noble savage” but it is still a caricature.

Have I read this somewhere before?

One other thing to be aware of before buying this book is that I suspect it overlaps quite heavily with prior Pryor works. I was skim reading his book on Stonehenge from 2016 (Stonehenge: The Story of a Sacred Landscape) to see if he had updated his conclusions in this book and found that far from it: the section he includes in Scenes from Prehistoric Life on Stonehenge is more or less identical to what had written before.

There is an excellent book in here but it comes with some health warnings: you will need to dig it out from the layers of memoir that have accumulated above it, you may find some of the judgements rather wayward, and you will need to check that you haven’t already read the same stuff in the author’s other books.

If you can accept this you will be presented with a series of fascinating and remarkable snapshots from the lives of the peoples of pre-historic Britain that are a great introduction to the subject. While it won’t bring your drunk great x203 grandad back to life it does a sterling effort to present his good side to the rest of the family.

← What is the benefit of reading history books?