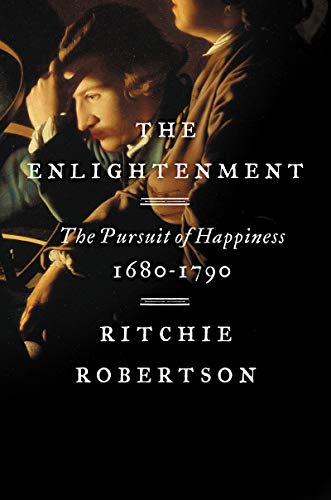 One of the most absorbing history books I have read for some time. At 780 pages long, excluding notes and bibliography, it is long and packed full of information. I’m not sure how much of that information I retained, but I enjoyed reading it.

The range of topics covered is enormous, and you’re bound to find something in it that will interest you and make you think about seemingly familiar ideas in a new way.

Citizens of the world

The author, Ritchie Robertson, is a professor of German language and literature at the University of Oxford. His treatment of the Enlightenment is broad, both in terms of subject matter and geographic scope. The Enlightenment has historically been associated principally with France, but Ritchie Robertson gives due weight to ideas coming from throughout Europe and North America, with German ideas, in particular, being covered comprehensively.

The pursuit of happiness

Unintentionally, Ritchie Robertson’s The Enlightenment was an interesting complement to the previous book I reviewed, Robin Lane Fox’s Augustine. Like Augustine, this is a book about ideas. But in this case, the ideas explored are quite different from those put forward by Augustine. Augustine, and his Confessions, are referred to in various places in The Enlightenment, invariably by way of contrast. It could be argued that a defining theme of the Enlightenment was a reaction against the medieval Christian way of thinking that Augustine was so instrumental in formulating. Whereas Augustine advocated a rejection of worldly materialism in favour of other-worldly spirituality, the ‘Enlighteners’ (a catch all phrase used by Ritchie Robertson to describe Enlightenment thinkers) sought practical ways of increasing people’s enjoyment of the here and now; how to pursue happiness in this life, rather than the life to come.

In my previous review, I noted that part of the interest, and challenge, of Robin Lane Fox’s book on Augustine was exploring a mindset alien to my own: mystical, other-worldly, spiritual. In contrast, there are strong parallels between the ideas put forward by the Enlighteners, and the predominate way of thinking in the modern developed world: Enlighteners advocated religious tolerance, freedom of thought and speech, cosmopolitanism, constitutional government, scientific progress and various other nice things that we would struggle to disagree with today. In summarising ‘What is Enlightenment’ Immanuel Kant challenged us to use our own reasoned and independent judgment, free from religious authority or superstition; in his phrase, sapere aude (dare to know).

What this book made me realise is that this familiarity presents its own challenges: in particular, it can be a burden in understanding the ideas of the Enlighteners on their own terms. Political thinkers and commentators in the nineteenth and twentieth centuries, and through to this day, have used the Enlightenment as a convenient scapegoat for whatever subsequent ideology or aspect of modernity they did not like. It’s been blamed for the communism, fascism, capitalism, western imperialism, global warming, and various other perceived bad things. Trying to see the Enlightenment in its historical context through the noise of contemporary preoccupations can be a struggle.

So part of the value of this book is that it challenges stereotypical ideas about what the Enlighteners thought and advocated. For example, the emphasis the Enlighteners placed on ‘reason’ can be misleading. Reason, as advocated in this period, often meant something closer to ‘good sense’ or ‘common sense’, rather than merely pure rationality. And ‘sense’ was important, because the Enlightenment was also a movement away from the Cartesian rationalism and deductive reasoning of the early seventeenth century. Much greater emphasis was put on empiricism and the concept of testing ideas against the realities of the perceived world. The model for the thinking of this time was science, and in particular Newtonian physics. The Enlightenment has been accused of promoting a cold dehumanising rationality (with the ideas of Jeremy Bentham taking centre stage in this interpretation). But many Enlighteners, such as David Hume, also stressed the importance of the ‘passions’ (i.e. emotions) and sympathy and sociability between people.

The Enlightenment versus God

Another stereotype is that the Enlightenment was anti-religious. But, whilst some atheistic ideas did emerge in this period, atheism was still relatively rare. Many Enlighteners tended towards Deism, advocating a less interventionist God stripped of superstition. Enlightenment ideas came from priests and monks within the Catholic and Protestant Churches. Enlightenment and reform also occurred within Christianity, with the Catholic Church having its own ‘Enlightenment’ Pope, Benedict XIV, between 1740 and 1758. Antagonism between religion on one hand, and philosophy and science on the other, became much more pronounced in the nineteenth century, when each side of the debate increasingly saw the views of the other as inimical to their own, and our tendency to see the two as incompatible is, to an extent, a product of developments which occurred after the Enlightenment.

An encyclopaedia for the Enlightenment

One of the most notable characteristics of the book is the enormous range of topics discussed. In 780 pages of principal text, it can feel at times like the book is recounting everything anyone of note wrote about in this period. To name just a few of the issues covered, the book includes discussions of ideas in philosophy, religion, science, medicine, politics, economics, literature and aesthetics. Diverse topics ranging from road building through to animal rights are ticked off. I can imagine one criticism of this book might be that it lacks coherence. Although I would not agree with that, it is true that the style of the book can feel at times encyclopaedic, and certainly, in my case, the names of many of the thinkers referred to entered my brain, and then left, pretty quickly. But overall this range was, for me, a strength of the book. It is the type of book that you will want to keep on your shelf and dip back into in from time to time in the future. And the author ensures the book is not merely a series of quotations. His commentary and analysis are insightful, and he provides coherence to the topics covered, in particular in his excellent opening and closing chapters.

Was there an Enlightenment?

The issue of coherence is linked to one of the questions that might be asked about the Enlightenment: was there any such thing? It has inevitably become fashionable to refer to ‘Enlightenments’ rather than ‘The Enlightenment’ (historians love pluralising things). Personally, I’m not sure how important these types of debates are. But the author is of the opinion that there was such a thing as ‘The Enlightenment’ and does a good job of justifying that by demonstrating cohesion around some key themes and ideas, together with a high degree of interaction among the thinkers, politicians and administrators of that time.

This book is a highly readable overview of ideas emerging at a turning point in European intellectual history, with many of those ideas having continued relevance to this day.

The Fall of Robespierre - review →