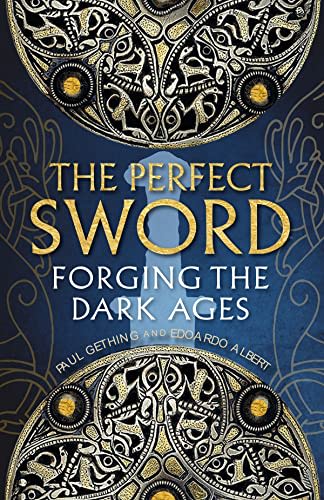 The Perfect Sword is a finely crafted book that brings the earthy practicalities of Anglo-Saxon sword making to life - in the context of honing swords into ever more effective murder weapons, over the two or three thousand years since their invention.

If the thought of a finely wrought blade stirs the embers of your soul, then you are sure to love this book. If you are merely sword-curious, you will find a lot to like as well.

The sword is the first tool made by humans whose sole function is death; or more specifically: killing other humans, according to Edoardo Albert and Paul Gething, co-authors of The Perfect Sword: Forging the Dark Ages.1

A brief history of swords

Prior to the sword people had shorter daggers and knives, as well as spears and bows but these were all primarily hunting and eating tools. They would also have been used as weapons of conflict, but their back story was humans vs animals, not humans vs humans.

Then at some point in the centuries before 3000 BCE perhaps at Arslantepe in Eastern Turkey the first swords were forged, made from an arsenic-copper alloy (ie not yet bronze). However for the next thousand years swords are rare finds, perhaps because the metal was still too bendy, or perhaps because even those finds classified as swords were not swords at all, given their shape is apparently not quite right.2

Things started to take off in the late bronze age with the first definite swords being found in Minoan Crete dated at about 1700 BCE. From here they quickly spread everywhere, took on a variety of interesting pointy shapes, and started their business of killing people in significant numbers.

And when people figured out how to get their hands on iron from about 1300 BCE, and discovered that it was all over the place, pretty much everyone could - and did - get themselves a sword, and started looking for trouble.

Fast forward to the Anglo-Saxons in England from about 450 to 1066 CE, the principle setting of The Perfect Sword, and home to a multitude of feuding warlords, one of whom - or more likely several in succession - were the proud owners of the titular weapon.

The sword itself was dug up from Bamburgh castle, a key stronghold in the Anglo-Saxon kingdom of Northumbria.

What makes it perfect?

So what was so good about it? Its iron core made it bendy enough not to snap in half, while its steel edge was hard enough to grind to razor sharpness. We can also assume that it came nicely blinged out with a fancy jewelled handle and scabbard. Finally the blade itself likely had a beautiful “pattern welded” finish which was the result of folding and hammering many layers of metal.

It is - we are told - more complex and more finely made than any other sword found in the UK. Only a king would be able to command the skilled workers and resources needed to make such a fancy weapon.

Albert and Gething walk us through what is needed to make the Bamburgh Sword a reality, with sections on:

They then delve into how it was used covering:

It also manages to go into quite a lot of detail without ever being boring. For example I now feel myself fully qualified to extract bog ore from an Anglo-Saxon swamp...

...shuffling through a bog and either poking down with a hardwood stick or spear, feeling for the strike on something harder beneath the surface, or digging through the layers of the bog, sifting the peat for the nuggets of bog ore.

...and well versed in the many stages of bashing, hammering, heating and cooling that go into forging the Anglo-Saxon blade itself, finishing off with annealing, quenching and tempering the metal.

Simply messing about with swords

My main hesitation with this book is that swords are, and always have been, murder weapons. The Perfect Sword is then by definition The Perfect Murder Weapon. The book can be seen as 288 page glorification of a brutal tool whose only purpose is to maim or kill.

It is possible that you are now rolling your eyes and thinking to yourself:

You: “What a hypocritical killjoy! Isn’t all history basically a record of who killed who and how efficiently?”

To which I would reply:

Me: “I suppose so, but often the point of the 'who killed who' stuff is to help understand how we got here now. It is not the mechanics of death that makes history interesting but the consequences of all the fighting.”

You: “Whatever you say man, personally I like the battles.”

And then I would come back with:

Me: “Yes and often I like them too. But should we? Isn’t this just another facet of our naive and juvenile entertainification of war?”

You would probably then lose patience:

You: “Look enough with the angst, just tell me: did you like the book or not?”

And I would sigh and admit:

You get the idea.

We could also branch off into a debate about whether swords kill people or whether people kill people, or about whether we need to arm the good guys with swords (and sword based history books) to counterbalance the bad guys with swords, about how the Japanese are a peace-loving zero-crime-rate sword-owning nation etc etc but I will let you imaginatively run through these arguments yourself.

To be fair to Albert and Gething they do devote a chapter to the unappealing consequences of an Anglo-Saxon king’s requirement to go killing and stealing if he was to keep his followers happy and build up his warband. In their words:

[Anglo-Saxon society was] a small elite of parasitic overlords psychotically parading through a countryside populated by the farmers...

But the romantic outlook is never far away:

[It was] the Heroic Age, a time when small groups of men might seize a kingdom and hold it against all comers... Their songs were bright and fierce, and soon forgotten: they have left little trace beyond a few score rusty sword blades, the chant poem Beowulf, and the foundations of our world.

The spade is mightier than the sword?

Again I should be fair to Albert and Getting and acknowledge that my gripe is ultimately with humanity rather than their book - The Perfect Spade would not interest me or very many other people even if archaeologists did happen to unearth a really good one.

The Perfect Sword is a finely crafted book that brings the earthy practicalities of Anglo-Saxon sword making to life - in the context of honing swords into ever more effective murder weapons, over the two or three thousand years since their invention.

If you are put off by the subject matter then you may be right not to engage with the book. But if on the other hand, the thought of a finely wrought blade stirs the embers of your soul, then it is sure to find a special place in your heart.