The Making of the Western Mind 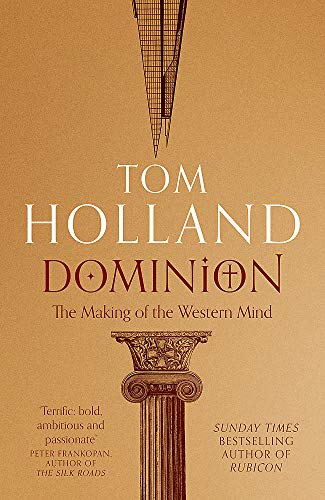 Dominion tells the story of the history of Christianity in the West, and traces this particular history as the source of all of our moral values in Europe and North America.

Tom Holland does a great job of making religious history fun - and gruesomely fascinating - showing why this Christian story still matters, even if no-one goes to Church.

Lady Elizabeth of Hungary was a young lady who had it all. Daughter of King Andrew II of Hungary, she had been successfully married off at 14 to a German Duke - a husband she seems to have been devoted to - and lived with all the trappings of luxury in a Thuringian (ie German) castle. The trouble was, as Tom Holland tells us in Dominion: the Making of the Western Mind, that while she had it all, she didn’t want any of it.

Inspired by the compassion shown by Jesus Christ she gave away jewellery to the poor, cared for the sick herself, and in her private moments dressed up like a beggar to experience destitution first hand.

After her husband died in 1227 she was able to fully indulge her religious compulsions. Building a hospital she worked there full time herself “mopping up saliva and mucus from the faces of the sick”. But aware that self abasement if self imposed could appear self indulgent, Elizabeth appointed a priest called Conrad to be her “master of spiritual discipline” - a sort of full time religious fitness coach.

To her satisfaction Master Conrad was a strict disciplinarian - beating her severely for missing one of his sermons for example, then denying her contact with her servants, forbidding her access to her children, and punishing her for offences which she didn’t commit. “Willingly she sustained repeated lashes and blows from Master Conrad - being mindful of the beatings endured by the Lord.”

After Elizabeth died from her maltreatment at the age 24 everyone agreed that her life was the apogee of holiness - and in a few years she was proclaimed a saint.

The familar shall be strange...

What are these principles? Holland gives us two:

It is his contention that these ideas are not in any way self-evident but are instead the product of a successful two thousand year Christian mission to reshape morality in the West.

In the middle ages this finds its expression in Lady Elizabeth and others such as Catherine of Siena, who a hundred years later experienced a holy vision of her own marriage to Jesus, formalised with a wedding ring made of his infant foreskin. Married to Jesus she could refuse her parents demands to pair her up with anybody else - her body was inviolate. Catherine, despite her inconsequential background, then became an influential voice for the reform of the Church, until her regular and extreme fasting led to her paralysis and death age 33.

Live, fast, die young and leave an emaciated corpse, seems to have been the tragic recipe for medieval religious celebrity.

Some things stay the same

So far so odd. But in our times the same ethical principles underpin the Me Too movement and outrage at those like Harvey Weinstein who take advantage of their power over their perceived inferiors. The idea that this is the wrong thing to do, Holland tells us, would have been utterly bizarre to a Roman. But now such behaviour appears unarguably debased.

While this is the central argument of the book - that two thousand years of Christian teaching have so subsumed our thought process that we can no longer easily detect them - the message is delivered via a narrative “History of Western Christianity”.

Starting with the Romans we are given a glimpse of their own value set, and the idea that “the future belonged to the strong”. Holland then takes us through the radical challenge that the emergence of Christianity posed to the traditional Roman worldview - how weird it would have appeared to someone like Julius Caesar who courted popularity by boasting of the millions of Gauls he had slaughtered.

The middle of the book takes us century by century through the middle ages and the evolution of Christian ideas and institutions.

The last section of the book shows how many of the key cultural developments in the modern West owe their underpinnings to Christian values, even though they may have no obvious religious foundation. For example the successes of the struggle for racial equality in the United States in the 1960s, or the debt owed to Christianity by Communist values (the meek shall inherit the earth, after throwing off their chains and uniting etc).

A great storyteller, Tom Holland works hard to to make The History of Christianity seem fun and exciting with entertaining and well chosen anecdotes. It is a long way from being a litany of popes and saints. He also does a great job of empathising with his chosen historical characters, making their behaviour seem rational and justified - maybe it is a good idea to burn a heretic? - while never quite falling into the abyss of total moral relativism.

Holland is clearly an excellent writer but he does have a few stylistic quirks that can grate. The one that needled me was his love of a good paradox - I counted 27 of them throughout the book, excluding the two in the index - about one per chapter.

Puritans, then, even as they rejected the old and familiar, could not entirely deny a lurking paradox: that their rejection of tradition was itself a Christian tradition.

Fair enough you might say, but Holland has come up with so many paradoxes that they end up being cheesily predictable: a bit like the corny “wise man” sayings of a 1980s Hollywood kung-fu master.

Aside from my minor grumble above, the main challenge I would make to this book is that, like the Lady Elizabeth, Tom Holland just takes things a bit too far. Is Christianity the foundation stone of all moral and cultural developments in the West? (Or at least: all apart from Darwinism which he says is the one Western development which is not derived from Christianity).

To what extent does human nature or other cultural influences play a role?

At times Holland comes across a bit like Batman doing one of those ink blob Rorschach tests. While Batman just a sees a load of bats, all Holland seems to see is a sequence of crosses.

One simple counterpoint to the view that all our morality is derived from Christian culture is my wife who was born in China and lived there until she was 301. It would be hard to argue that she had any strong Christian influence on her upbringing but I am always struck by how similar our moral values are - what we think is right and wrong.

However perhaps I am missing the point: Holland is not an anthropologist after all, he is a historian and by overstating his case he provokes more debate, and challenges us as readers to think for ourselves. Ultimately I much prefer to read a book with a strong argument that I don't fully agree with, than one with no argument at all.

A great story well told, Dominion, the Making of the Western Mind is well worth investing the time to read, exploring the strangeness of Christianity but also its centrality to our modern Western mindset.

We may no longer think of ourselves as brides of Christ like Catherine of Sienna did, but the divorce is still a long way from being finalised.