London in the Roman World 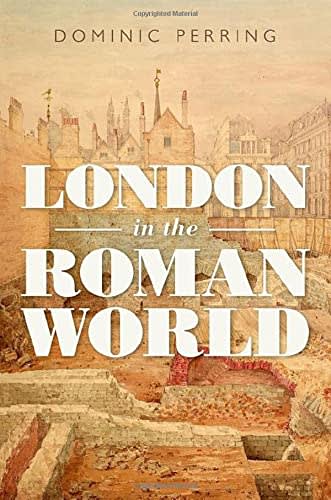 London in the Roman World takes us on a detailed archaeological tour through 360 years of Roman London.

I suspect this book will set the standard for overviews of Roman London for many years - the point of reference for budding academics and interested punters. While not an easy read, it will reward your perseverance.

The bronze head of the Roman emperor Hadrian has a serene, philosophical expression. But his last moments were brutal. 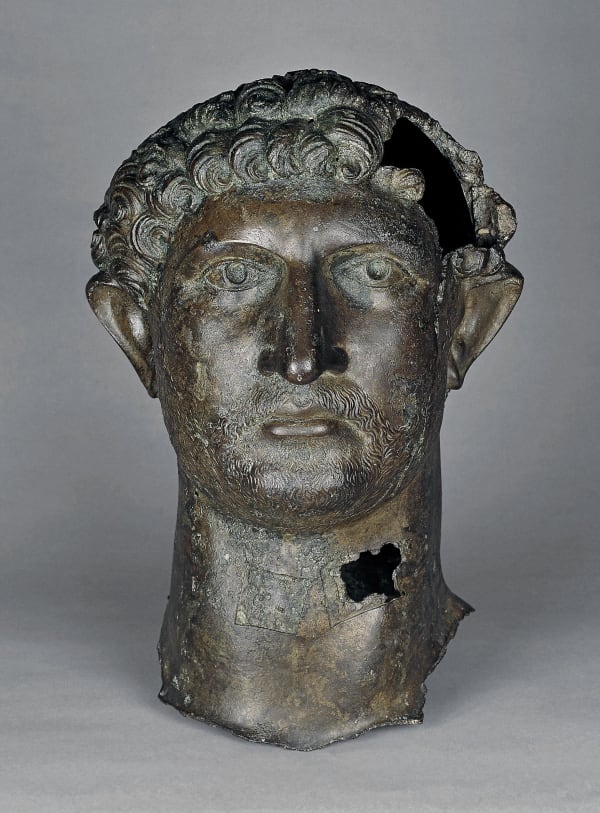 © The Trustees of the British Museum

recovered from the Thames below London Bridge... [the head] had been hacked from the body of the imperial statue, and may have been thrown into the river in an act of ritual abuse and expurgation...

An enraged1 Londoner2 had hacked the supreme symbol of Roman authority to bits.

London has often been a place that divides opinion, and its Roman incarnation - built to dominate and extract - may have been particularly despised by many of the local Britons.

Dominic Perring in his new book London in the Roman World takes us on an archaeological tour through the 360 years or so of Roman London.

Before the Romans came to Britain the area of London was a contested borderland between different kingdoms. A few farms dotted the landscape but nothing more. The river Thames marked the border and wasn't so easy to get across: it was about a kilometre wide at high tide, exposing mudflats and a 275m crossing when the tide went out.

When the conquering Roman army arrived, perhaps in 43 CE, the site of what was to become London represented the narrowest crossing point where the river was still tidal. Boats could use the tide to help them waft up and down the Thames to the sea and supply the soldiers with their wine and olive oil.

A great spot to dominate the surrounding country in fact, with roads going in all directions, and easy access to resupply by sea.

Archaeologists can still see traces of the initial Roman fort erected by the invading army. Perring conjectures that the Emperor Claudius probably arrived soon after by boat, landed on the south bank of the Thames - at a car park near Borough Market - and made a triumphant crossing into the military camp that was to become London, with “soldiers of the Praetorian Guard, elephants and siege engines, and an extended court of senators and members of the imperial household”.

In less than ten years the Roman administration turned this temporary fort into the largest settlement in Britain.

It is fascinating to see the parallels between early London - a thoroughly Roman city - and Rome - the quintessential Roman city. When the Colosseum was built in Rome to help legitimize the new Flavian dynasty of Vespasian3 the amphitheatre was built in London (CE 70). Links can be seen between Trajan's new forum in Rome and London's massive upgrade to its own forum (CE 102 ish). Rome got its Aurelian walls in 271 CE, and London completed its own circuit in 275 CE.

Although the scale of London was clearly an order of magnitude smaller than Rome, similar political forces were at work. And although “small” the urban works would still have looked impressive: London's great forum for example was about the same size as Trafalgar Square (ie very big), and the main basilica was longer than St Paul's cathedral (ie very long).

Not built in a day

Roman London existed for at least 365 years. To put this in context Perring reminds us that this is a “a longer span than stretched from the death of England’s first Queen Elizabeth to the twentieth-century accession of her modern namesake”.

During this period the city changed a lot, in terms of number of people, types of buildings, roads, walls etc.

It was also subject to at least two episodes of extreme violence.

The first was during the Boudiccan revolt in AD 60-61 when the city was burnt to the ground - the layer of destruction still clearly visible if you dig down far enough.

The second was during the reign of Hadrian in CE 125-6 soon after his visit, when again the city was burnt to the ground. This is the time when Perring suggests Hadrian's statue got its head chopped off, and is the date of the famous Walbrook skulls: hundreds of human heads found chucked in a tributary of the Thames, mostly young males and some with evidence of “violent treatment”. There are probably thousands more of these skulls still underground.

Perring suggests that the skulls - and other body parts scattered over the area - fit the pattern of headhunting which had become “normalised” with the second century Roman army, possibly in a punitive campaign against those who had burnt the city down in the first place.

Perring's suggestion that there was a major Hadrianic revolt in London is not accepted by everyone. In particular the Walbrook skulls are sometimes suggested to be the result of respectful ritual treatment of the dead. But - as Perring reminds us - this doesn't explain why their heads got bashed-in in the first place and why there are so many of them all in one go.

So the Roman empire was not a particularly welcome addition for many Britons and when Rome left Britain to its own devices in the 5th century and the town lost its official support it seems to have been abandoned and then deliberately shunned. There is no evidence for anyone living within the London walled area from about 450 CE despite a few Saxon settlements close by.

Perring guides us through the twists and turns of London's Roman past with as much detail as the archaeological record allows. Himself a London based pro archaeologist he doesn't shy away from providing a layer by layer account of the discovery process.

Archaeology is all about what has been found, and where it was found. Combining with a bit of chemical analysis and mixing with larger and larger data sets, we (ie they) can make some fairly confident judgements about what was going on.

Perring invites us into this process of discovery. For example we are told of the different types of pottery or artefacts found in certain trenches, or whether a trace element of slag is indicative of a particular industry. We even get the occasional reconstruction of past lives from their cremated remains.

The benefit is that you get a closely argued, authoritative and convincing account. The downside is that the writing is deliberately kept pretty dry.

If you are tired of London...

The other thing to bear in mind is that this book assumes not only an interest in Roman London but also a familiarity with a present-day street and place names. If you don't know where the Bloomberg Building is, or what is meant by One Poultry you are going to struggle to figure out what is going on.

I found I enjoyed the book much more reading it alongside my Roman London map: Londinium: A New Map and Guide to Roman London which unfortunately seems to be quite hard to get hold of... (I picked up my copy in the little Guildhall Museum shop if that helps anyone.)

I suspect this book will set the standard for overviews of Roman London for many years - the point of reference for budding academics and interested punters. While not an easy read, it will reward your perseverance.

The statue of Hadrian's coolly composed, dispassionate expression masks the hatred many must have felt towards him, and the statue's brutal end: beheaded and chucked in the river.

Perring's detached and scholarly writing equally allows us to glimpse into this turbulent, dominating and often extremely violent Roman city.

← Migrating From WordPress to Eleventy - a non-developer's experience

Phoenicians and the Making of the Mediterranean - review →