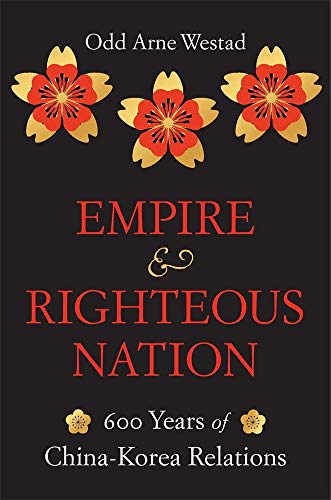 Empire and Righteous Nation crams a lot of into its 170 pages: it is an insightful and entertaining primer on Korean history over the last 600 years.

Those already well informed about the Chosun state and King Kojong may find it covers familiar territory. But if you are a relative newcomer you will get a much better appreciation of Korean history and identity.

Kim and Trump exchanging pleasantries in the Demilitarized Zone reinforced for me the outsiders view of modern Korea: the product of a terrible war, divided into two, with an impoverished totalitarian North and a prosperous open South.

This view, as Odd Arne Westad shows us in his book Empire & Righteous Nation: 600 Years of China-Korea Relations, overlooks much of what makes Koreans Koreans, and much of how think of themselves. This has been an identity principally delineated by China, their largest and most influential neighbour, ever since they were both baby states 2000 years ago.

A common way of thinking about this relationship was as older and younger brother. Because both states have shared a deep commitment to Confucian values over the last 600 hundred years, the duties and rights of big and little brother shape their interactions.

Westad gives us a great example of this: after a minor border kerfuffle in 1864 when Koreans chopped down some trees on the wrong side of the border, the Korean king apologised to the Qing Emperor who in turn promised to give them the wood they need anyway.

This is how I try to handle conflict resolution between my kids as well, although the three year old is not quite up to the flowery language of thanks memorialised by the Korean King Kojong:

'I am frightened and ashamed, and there is no way I can be forgiven... I never imagined I would escape blame and punishment, yet Permission has been granted to supply timber. With the command to dispatch men to receive it, I am emotionally overcome in the extreme and rendered utterly speechless...'

Why does Korea even exist?

Westad notes that the commitment to this shared Confucian identity was a key reason why Korea even survived as an independent state, while China's other neighbouring kingdoms were swallowed up by an aggressively expansive Qing empire. Because Korea provided a model example of how 'vassal' or subordinate states should behave, it was more valuable to allow them to exist in this role, than go to the effort of conquering and ruling them (which only happened once during the Mongol Yuan dynasty).

The old ways are the best

But while Korea continued to exist, this same dedication to an increasingly old fashioned political and social system led to a very brittle state. Whatever you say about the pros and cons of Confucianism, it doesn't encourage social mobility: the duty of the common folk is to obey and to pay. It is a philosophy that can encourage paternalism and responsibility, but also exploitation and ossification.

So when Japan started causing trouble in the late 19th century the Korean state found itself helpless to do anything about it. Although - to be fair to the Chosun (Korean) state - the Russians, Chinese and (eventually) the British Empire didn't fair very well against Japan either.

A century of pain

Which takes us to the 20th Century which has been a century of pain for Korea in many ways. Since the shocking and blatant murder of Korean Queen Min by Japanese 'diplomats and officers' in her palace in 1895 (for not being pro-Japanese enough), Koreans have been displaced, enslaved and killed.

By the time the Korean war ended in 1953 all the cities and towns had been destroyed, much of the countryside was a wasteland and millions of Koreans had died. In the three years of the Korean War alone Westad tells us that 13% of the population, or about 2.5 million Koreans had perished.

An updated view of Korea

This is the context then for the current situation on the Korean peninsular - a centuries long existence as a single united kingdom, closely connected to Chinese culture, and the trauma of a devastating war in living memory.

Westad's book is a great introduction to this fascinating national history, as revealed by it's foreign and principally Chinese relations.

It does this with three authoritative chapters: the first going from about 1392-1866, the second from 1866-1992, and the third covering 'today' which is up to 2019. It is mainly a succinct narrative summary covering the whole period in about 130 pages, with the author's conclusions taking up another 25 pages.

It is amazing how much Westad gets across in such a short book, and that he manages to make the story come alive as he does so.

With such a short book there is not much room for debate - Empire & Righteous Nation tells you 'what really happened' but there is no time for acknowledging alternative accounts. This struck me as I read the 'China and Korea today' chapter when we are told precisely what Hu Jintao and Xi Jinping did and what they thought. Even with Westad's no doubt impressive Chinese connections, it sometimes felt like Westad's opinion as much as fact.

One reason I enjoyed this book so much was that I was utterly unfamiliar with Korean history before reading it.

However if you are already well informed about the Chosun state and King Kojong you may find it covers familiar territory. It is not trying to reveal something new but shine a light on something often neglected.

Empire and Righteous Nation crams a lot of into its 170 pages. Given that I knew nothing when I started, I probably got more bang for buck - or perhaps perspicacity per pound - than any other history book I have recently read.

If you come from a similarly ignorant position, you will find Westad's primer an insightful and entertaining introduction to Korean history: given Korea's centrality to current international relations, a better understanding and a more nuanced view can only be a good thing. And if you also happen to be president of the United States of America, reading this book may make the world a slightly safer place.

← Phoenicians and the Making of the Mediterranean - review