From Rebel to Ruler

One Hundred Years of the Chinese Communist Party 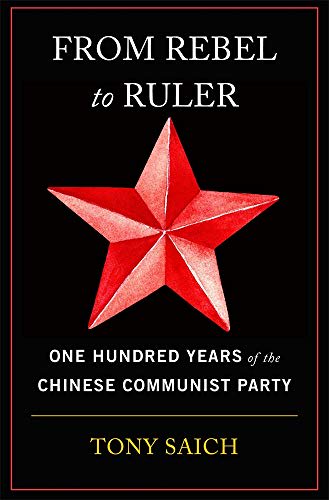 If you want to understand where the Chinese Communist Party has come from and what shapes its thought today, From Rebel to Ruler is an excellent and fair-minded text.

But if you are looking for an easy to read history that will bring the period to life, this scholarly work will be a struggle.

My in-laws like to tell a story about when the communists came to town.

Their home was in a small village just outside the county town, about 5 hours west of Beijing. In the 1930s and 1940s the town was overrun by the Japanese and then re-conquered by the Guomindang (the Nationalist Party). The Japanese occupation in particular was a very tragic and traumatic time. When the Red Army came to attack the town in turn, they realised that the high walls that then surrounded it would need to be scaled with ladders – and that they would need to make the ladders.

The Communist army troops visited the houses in the village and asked to borrow tools – my grandfather-in-law was asked to hand over an axe.

The soldier who took it carefully wrote out a receipt for the axe, signed it and left the note with them.

After the night time battle, the town won, the most incredible thing happened: a soldier came and returned the axe.

This was so unexpected – a soldier actually giving something back – that it has deserved retelling for (so far) three generations.

It wasn’t the same axe, the story goes, but it was still a pretty good one, and well you can’t have everything.

The Communist Party of China has – I believe – profoundly affected more people’s lives than any other political movement in history, punctuating the micro-histories of every family in China. Some stories end well like the one above, others less so.

Tony Saich in “From Rebel to Ruler: One Hundred Years of the Chinese Communist Party” wants to tell the story from the top down, focussing on the leading people and party policies from the time of its founding in 1921 to the centenary in 2021.

What is all about?

Whatever your views of the Chinese Communist Party, their story over the last 100 years is incredible: starting from a position of a few thousand members in the 1920s, mainly in the major southern cities, the Chinese Communist Party was almost completely wiped out by an extermination campaign launched without warning by their then ally Chiang Kai-shek of the Nationalist Party. Then, regrouping in the countryside, it was again almost destroyed in a systematic military campaign. The Japanese invasion gave them a reprieve and in the civil war showdown after the Japanese were defeated, again against expectations they came out on top in 1949. The Nationalists were forced to flee the mainland to Taiwan where they remain to this day.

It doesn’t stop there: after consolidating their position in power and keen to deliver on the promises of the revolution, they launched upon the essentially calamitous Great Leap Forward. Encouraged / forced to waste their time on unproductive activities like making useless DIY steel meant people produced less food and many died as a result.

This was followed by the Cultural Revolution from 1966 which, Saich tells us, was Mao’s attempt to shake things up so that the younger generation could undergo a “baptism of fire” like the political and social maelstrom that buffeted Mao himself as a young man. The result was

a shattered social fabric, with students turning on their teachers and fellow classmates, children encouraged to denounce their parents, workmates fighting one another leading to ridicule and disrespect of authority in all its forms with the exception of the holy writ of Mao.

Tony Saich, From Rebel to Ruler

Things can only get better

Finally things calm down a bit after Mao’s death in 1976 and the Communist Party turned its focus to economic objectives rather than prioritising class struggle – generating in the end the incredible economic successes of the 90s and 2000s.

Saich takes us all the way to the present day, musing on the very different communist party that we now see – and tracing the threads that still bind it to the traditions and values of its past.

Saich clearly knows his stuff. The level of political detail is compendious, and he references a wide range of primary and secondary sources. He is also very even handed in his assessments, acknowledging the huge benefits that the Chinese Communist Party has brought to many ordinary Chinese people, but also some of the disastrous mistakes that it has made along the way – and the structural weakness (particularly around leadership succession) that it still faces.

Picking out a few highlights: I enjoyed the section right at the end of the book where Saich expounds on The Importance of History to the Communist Party (it is very important… and I suspect that the Communist Party would see Saich’s history as off-message a lot of the time despite its neutral and factual tone).

I also enjoyed the chapter discussing what led to the Communists winning the civil war in 1949 where I was happy to see that luck was discussed amongst the other factors – something that historians often see it as their duty to explain away rather than acknowledge.

What about the peasantry?

What I missed from this book was a sense of why people followed the communist party, particularly in its early years. Because Saich is so focused on the top of the tree, we never get a view from the grass roots. What was it that attracted people? Why did some people devote themselves to the cause, others acquiesce and others resist? After finishing the book I still don’t have a clear idea.

The curse of knowledge

The main weakness of the book is probably linked to just how much stuff Saich does know. The text is written in a style which conveys maximum information in the minimum number of words. There are very few embellishments (such as personal anecdotes) and lots of acronyms. Although I am not a fan of over-personalising history, “From Rebel to Ruler” goes to the other extreme and is only really interested in people as vehicles for national policies.

In combination, this means it is not a book that I would recommend reading from start to finish, as I did! For me the book is best treated as something to dip in and out of – and I suspect it was written primarily with students in mind.

If you want to understand where the Chinese Communist Party has come from and what shapes its thought today, this is an excellent and fair-minded text. If you want to get the low-down on what was happening at the top at key moments in Chinese twentieth century history this is the book for you. But if you are looking for an easy to read history, from the bottom up – stories of ordinary people getting their axes back… or not – this scholarly work will be a struggle.

← The Fall of Robespierre - review